“The German economy looks set to contract in the third quarter, and with PMI showing the downturn gathering in September and the survey’s forward-looking indicators also deteriorating, the prospects for the fourth quarter are not looking good either.

“The deepening decline in business activity in September was led by the service sector, which has seen demand weaken rapidly as customers pull back on spending due tightening budgets and heightened uncertainty about the outlook.

“Whilst constraints on manufacturing output from material shortages looked to have eased somewhat, resulting in a shallower decline production levels in September, goods producers like their service sector counterparts have nevertheless grown increasingly concerned about activity in the coming months, with the energy crisis stoking recession fears.

“Just when it looked like underlying inflationary pressures might be easing, a fresh surge in energy prices has seen business input costs rise at a faster rate for the first time in five months, in turn leading to a renewed acceleration in average prices charged for goods and services.” 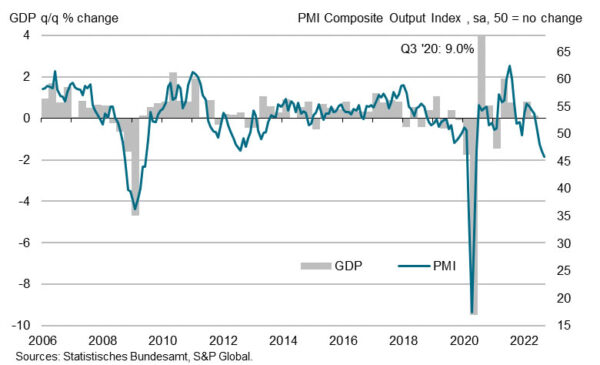