NIESR said the 0.5% mom growth in UK GDP in October “largely reflects the weakness in September” resulting from additional Bank Holiday for the State Funeral of HM Queen Elizabeth II. The risks of GDP contraction in Q4 “remains elevated”. It expects GDP to remain flat in Q4.

“Monthly GDP grew by 0.5 per cent in October, in line with our forecast last month, driven by a strong pick-up in wholesale and retail trade, and repair of motor vehicles and motorcycles, which seem to have been strongly affected by the additional September bank holiday.

“Despite this positive outlook from the monthly growth figure, there are still strong downside risks to GDP in the fourth quarter of this year due to high inflation and interest rates –which continue to suppress demand –and supply chain disruptions, as well as work backlogs due to industrial action and a tight labour market –which continue to weigh on business growth. We still expect GDP to remain flat in the fourth quarter of this year.” 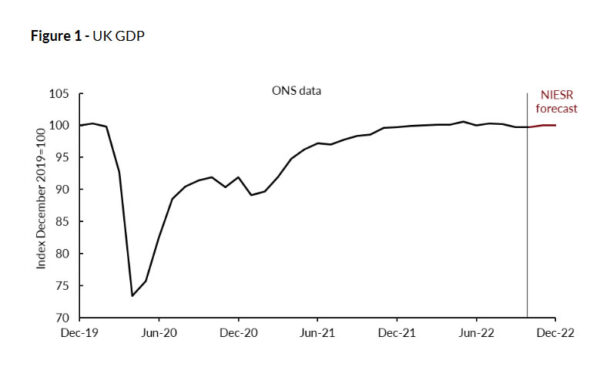