Although the single currency fell to as low as 118.24 late last week, the subsequent strong rebound suggests a temporary low is possibly formed there and consolidation with mild upside bias is seen for a test of the Kijun-Sen (now at 120.78), however, a daily close above there is needed to add credence to this view, bring test of previous resistance at 121.34, once this level is penetrated, this would provide confirmation and extend the rebound from 118.24 low for retracement of recent decline to 122.00 and then 122.50-55 but price should falter well below resistance at 123.31, bring retreat later.

On the downside, whilst initial pullback to 119.70 and then the Tenkan-Sen (now at 119.37) cannot be ruled out, reckon 118.80 would contain downside and bring another rebound later. A drop below 118.80 would suggest the rebound from 118.24 has ended instead, bring retest of this level but break there is needed to signal recent erratic decline from 124.10 top has resumed for further fall to 118.00, then 117.50, however, still reckon downside would be limited and price should stay above 116.90-00. 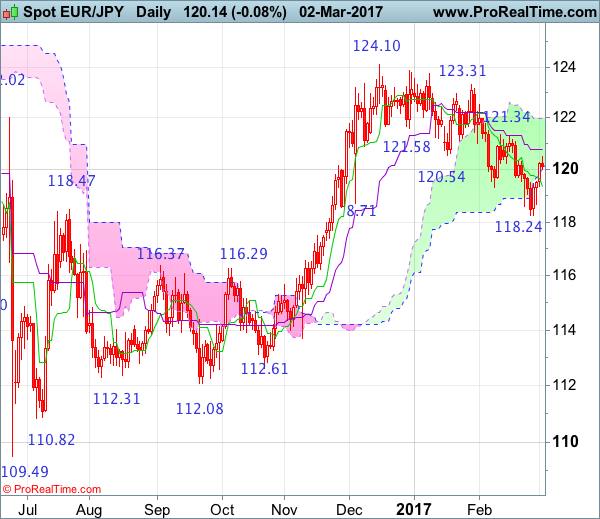 On the weekly chart, the single currency has continued finding good support right above the Kijun-Sen (now at 118.09) and has staged a rebound, a white candlestick looks set to be formed this week, suggesting consolidation above this level would be seen and test of the Tenkan-Sen (now at 120.99) cannot be ruled out, however, a sustained breach above resistance at 121.34 is needed to signal the fall from 124.10 has ended, then a stronger rebound to 122.00 would follow but break of 122.52 is needed to retain bullishness, bring test of indicated resistance at 123.31. Looking ahead, only above this level would signal recent rise from 109.49 low has resumed for retracement of early decline to 125.25-30 (50% Fibonacci retracement of 141.06-109.49), having said that, reckon resistance at 126.47 would cap upside and price should falter below resistance at 128.23, bring retreat later.

On the downside, expect pullback to be limited to 119.30-35 and 118.80 should hold, bring another rebound later. Below 118.80 would suggest the rebound from 118.24 has ended, bring retest of this level, a break there would signal the retreat from 124.10 top is still in progress and near term downside bias remains for this move to bring retracement of recent upmove, hence weakness towards the Kijun-Sen (now at 118.09), however, a weekly close below there is needed to signal the rise from 109.49 has ended, bring further decline to 117.30-35 but previous resistance at 116.29 should contain downside due to near term oversold condition, bring rebound later. 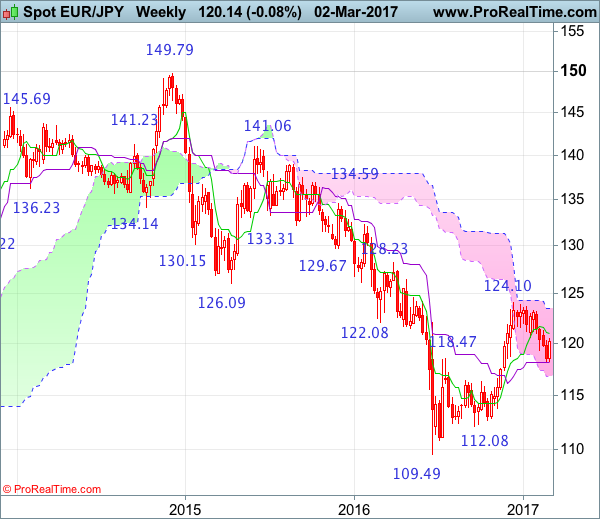