As cable has remained under pressure after breaking indicated previous support at 1.2347, adding credence to our view that the fall from 1.2706 top is still in progress and mild downside bias remains for further weakness to 1.2200, then towards 1.2150. Looking ahead, below 1.2150 would signal the rebound from 1.1986 low has ended, then further fall to 1.2100 would follow, however, still reckon downside would be limited and price should stay well above support at 1.1986, bring rebound later.

On the upside, although initial recovery to 1.2300 cannot be ruled out, reckon said previous support at 1.2347 would turn into resistance and cap cable’s upside, bring another decline later. A daily close above the Tenkan-Sen (now at 1.2392) would defer and risk a stronger rebound towards the Kijun-Sen (now at 1.2460) but only a sustained breach above there would signal the fall from 1.2706 has ended instead, risk a stronger rebound to 1.2500 but price should falter well below resistance at 1.2570. 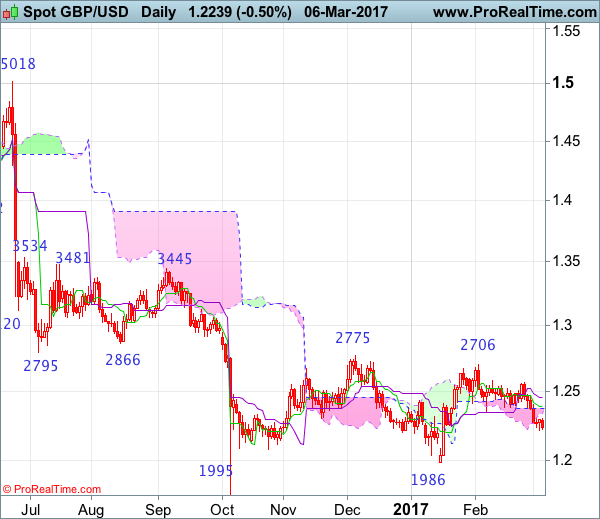 On the upside, whilst initial recovery to 1.2300 cannot be ruled out, renewed selling interest should emerge around previous support at 1.2347 (now resistance) and bring another decline later. Above the Kijun-Sen (now at 1.2412) would bring test of last week’s high at 1.2479 but break there is needed to suggest low is formed, bring a stronger rebound to 1.2570, however, a weekly close above there is needed to signal the retreat from 1.2706 has ended, bring further gain to 1.2650-60, then retest of 1.2706.