Aussie has remained under pressure after recent anticipated selloff, adding credence to our bearish view that recent fall from 0.8125 top has resumed and downside bias remains for further weakness to 0.7600, then 0.7560-70, however, as this move is still viewed as retracement of early upmove, reckon downside would be limited to support at 0.7535-40 and 0.7500 would remain intact due to oversold condition, risk from there has increased for a rebound later.

On the upside, whilst initial recovery to 0.7730-35 cannot be ruled out, reckon the Kijun-Sen (now at 0.7761) would limit upside and bring another decline. A daily close above previous support at 0.7819 would defer and suggest low is possibly formed, bring a stronger rebound to indicated resistance at 0.7897, break there would abort and signal low is formed instead, bring further subsequent raise to 0.7915-20, then towards 0.7970-75, however, still reckon upside would be limited to 0.8000. 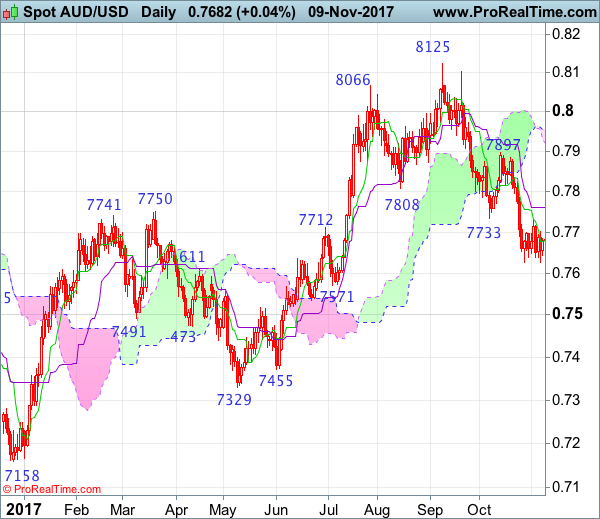 On the weekly chart, as assize’s anticipated fall from 0.8125 adds credence to our view that top has been formed there and price has remained weak, consolidation with downside bias remains for weakness to 0.7570-75, then towards  support at 0.7535, however, near term oversold condition should limit downside to the lower Kumo (now at 0.7462) and reckon support at 0.7372 would hold from here.

On the upside, although initial recovery back to previous support at 0.7733 cannot be ruled out, reckon upside would be limited to 0.7830-35 and price should falter well below the Tenkan-Sen (now at 0.7864), bring another decline later. A weekly close above resistance at 0.7897 would abort and signal low is formed instead, bring a stronger rebound to 0.7950-60 and possibly towards 0.8000 but upside would still be limited and 0.8103 resistance should remain intact, bring another decline later. 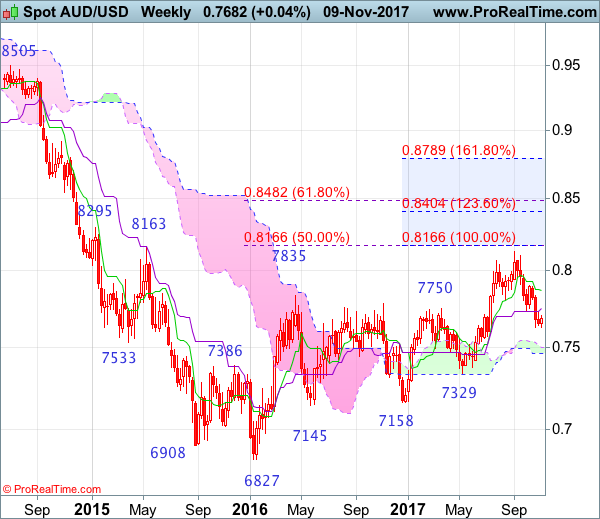