Despite rising to 1.3521 on Friday, lack of follow through buying and the subsequent retreat suggest recent upmove is not ready to resume and further consolidation below this month’s high at 1.3550 would be seen and pullback towards support at 1.3320 (last week’s low) cannot be ruled out, however, break there is needed to signal top has been formed at 1.3550, bring retracement of recent rise to 1.3300 but reckon downside would be limited to 1.3250-60 and previous support at 1.3221 should remain intact, bring rebound later.

In view of this, would be prudent to stand aside in the meantime. Above 1.3450 would bring another bounce towards 1.3520 resistance, however, only above this level would revive bullishness and signal correction from 1.3550 has ended, bring retest of this level first. Looking ahead, a break of 1.3550 would extend the rise from 1.3027 low to 1.3595-00, however, reckon recent high at 1.3658 (Sept high) would hold from here due to near term overbought condition, bring retreat later. Our preferred count is that (pls see the attached chart) the wave IV is unfolding as a complex double three (ABC-X-ABC) correction with 2nd wave B ended at 1.2774, hence 2nd wave C could have ended at 1.3658. 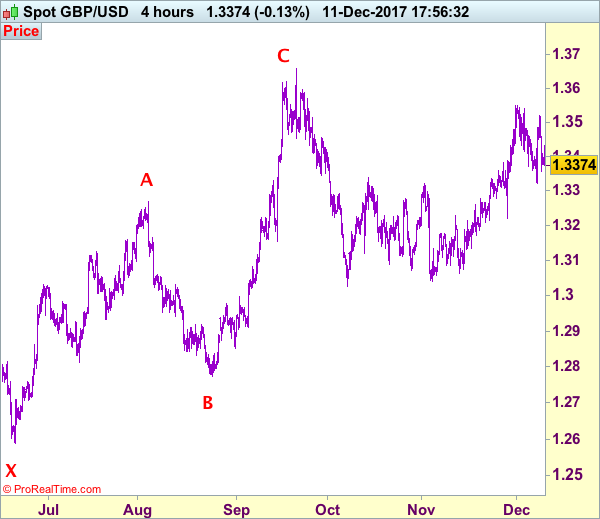