BOE voted unanimously to leave the Bank rate unchanged at 0.75% and the asset purchase program at 435B pound. As expected, the central bank delivered a slightly more hawkish tone as Brexit was delayed to October 31, temporarily lowering the risk of no-deal Brexit. The members are more upbeat on UK’s economic outlook. Besides see the economy to expand +0.5% in 1Q19, up from +0.2% in 4Q18, the staff has upgraded GDP growth in 2019 through 2020. The unemployment rate is expected to fall further from the current multi-decade low level. Meanwhile, inflation forecasts were revised lower.

The central bank turned more upbeat on the growth outlook, noting that “the underlying pace of GDP growth appeared to be slightly stronger than previously anticipated, but marginally below potential”. Yet, it added that “that subdued pace reflected the impact of the slowdown in global growth and ongoing Brexit uncertainties”. BOE now estimates GDP growth to reach +1.5% y/y this year, compared with February’s projection of +1.2%. The economy would then expand further to 1.6% (February: +1.5%) and +2.1% (February: +1.9%) in 2020 and 2021 respectively. On inflation, the central bank forecast it to reach +1.6% this year, down from +2% projected in February, before recovering to 2% (February: +2.1%) in 2020 and 2.1% in 2021. Unemployment is expected to fall over the two-year forecast period to 3.5%, the lowest since 1973. Better job market would lift wage growth, which is expected to be well above inflation. 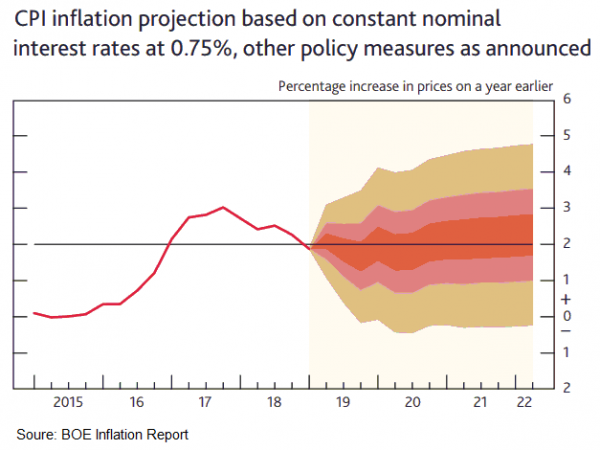 On Brexit, Governor Mark Carney noted that the country is “going through this period of uncertainty in the run up to some resolution around Brexit”. He added that if “that resolution is some form of arrangement, with some form of relatively smooth transition to it, it will require interest rate increases over that period and it will require more and more frequent interest rate increases than the market currently expects”.

Carney warned that investors might have been under-estimating future BOE rate hikes. He suggested that the current market interest rate curve is “unequal to the task” of achieving the inflation target. That is higher interest rates are needed to prevent inflation overshoot. Yet, Carney affirmed that the pace of rate hike would be gradual.