RBA minutes for the July meeting suggested that policymakers acknowledged the economic growth and the improvement in the labor market recently. The members also discussed the appropriate neutral rate which they believed should be at +3.5%, well above the current cash rate of 1.5%. This heightened market expectations of a potential rate hike in the near-term. As such, Aussie jumped to a 2-year high after the release of the minutes.

Policymakers noted that ’employment growth had been strong in May for the third consecutive month. Members noted that growth in the preceding few months had been driven entirely by full-time employment and that total hours worked had trended higher as a result’. Yet, they reminded that ‘the underemployment rate, which measures the number of part-time workers wanting to work more hours, had remained elevated’. 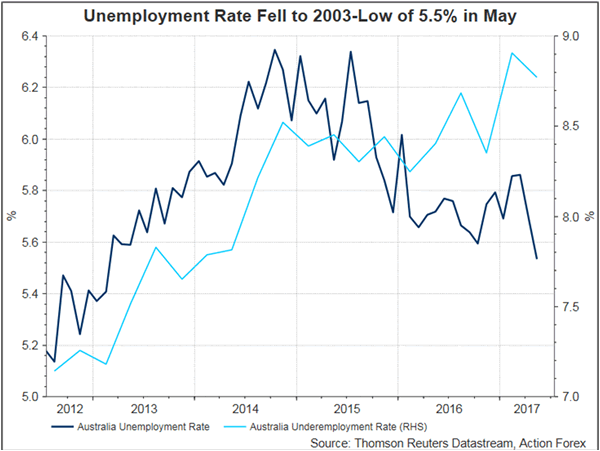 Robust developments in the economy and the job market are supporting housing markets. The RBA remained cautious over the possibility over the overheating property market. As suggested in the minutes, ‘housing markets continued to warrant careful monitoring’. Moreover, policymakers ‘recognized that it was too early for the prudential supervision measures announced by the Australian Prudential Regulation Authority, which were designed to help address the risks associated with high and rising levels of indebtedness, to have had their full effect’.

What caught the most attention was the discussion of the ‘neutral rate’, at which output growth is at potential and inflation is stable. The members noted that, while the rate had been broadly stable until around 2007, it ‘had since fallen by around 150 basis points to around 1%’. They generally believed that the neutral rate is around 3.5%, given that ‘medium-term inflation expectations were well anchored around 2.5%, although there is significant uncertainty around this estimate’. 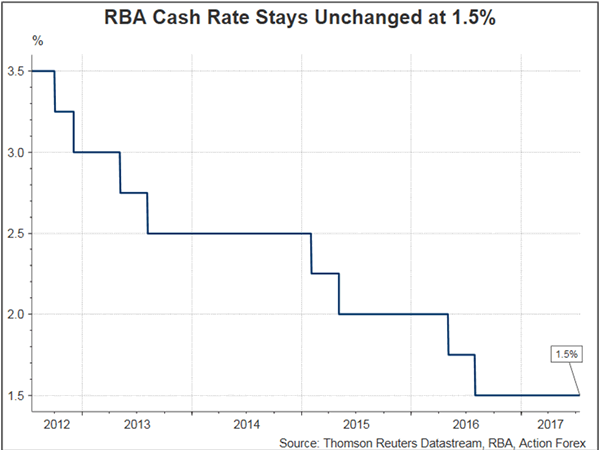 The market has speculated whether it is a signal that the RBA would hike interest rate some time soon. In our opinion, the RBA is in no hurry to increase the interest rates soon. First, policymakers would likely prefer wait for more evidence of a sustainable economy growth and benign inflation is giving room for keeping the interest rates low for some time. Second, Australian dollar’s appreciation is offering some effects of a tighter monetary policy.