The pace of asset purchases in the Pandemic Emergency Purchase Program (PEPP) in 4Q21 is the focus of this week’s ECB meeting. Following hawkish comments from some council members, especially chief economist Philiip Lane, hopes that an announcement related to reduction in purchases would be made at the upcoming meeting have increased. The policy rates would stay unchanged. Besides, the ECB staff would upgrade GDP growth and inflation forecasts in the latest economic projections.

PEPP purchases in 4Q21 and the plan to deal with its completion are the focus of this week’s meeting and the coming few meetings. Speculations have heightened over reduction in asset purchases in light of recent comments of some members in the committee.

Chief economist Philip Lane has recently opened the door to slowing the pace of PEPP purchases. As Lane suggested, “in the grand scheme of things, this is a local adjustment”. He stressed that the “adjustment” is not a “pure taper situation” and not the end of PEPP, which he described as “very far away” and March 2022 at the “earliest”. He also emphasized that the pace of purchases would still be high after a deceleration. Lane also stressed the flexibility of asset purchases, indicating that the central bank would buy less if the objective of “maintaining favorable financing conditions” could be done “with lower purchases”, and buy more “if favorable financing conditions require more purchases”. We believe these comments have lowered the bar for the central bank to slow the pace of PEPP purchases from 80B euro/ month currently. Meanwhile, Vice President Luis de Guindos has recently reiterated that the PEPP is “linked to the pandemic and its economic consequences”. Given the recent positive economic data, “we will not always have emergency program, since that would mean that we had not put the pandemic and related costs behind us”. 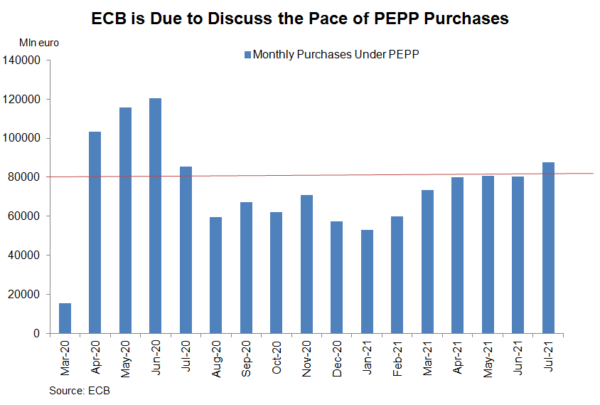 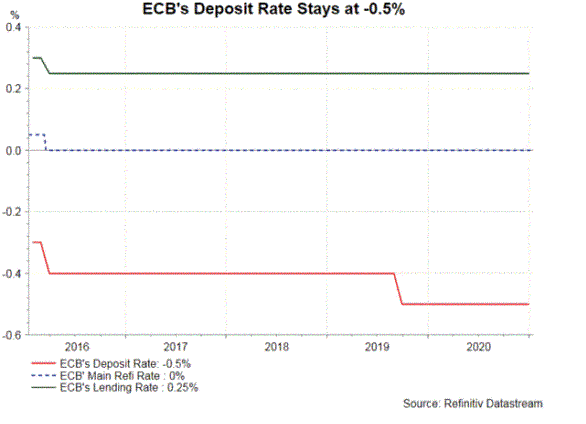 As a dove, Lane’s comments are significant and have raised hopes that the ECB could announce to decelerate PEPP asset purchases in as soon as this month. Yet, Lane and members who have delivered hawkish comments of late are open to the timing of the adjustments, while others remain cautious. The committee will likely have a heated debate and the actual announcement could be delayed to December.

All in all, the bottom line is that the ECB would only wind down the PEPP if other policy tools are in place to avoid disruptions. Indeed, policymakers have suggested in previous meetings that the Asset Purchase Program (APP), an expansionary monetary policy tool initiated in mid-2014, would take up a bigger role upon completion of the PEPP.

On inflation, headline CPI accelerated to +2.2% y/y in July, from +1.9% in the prior month. Eurostat projects that the August reading would have imrpoved further to +3%. Core CPI moderated for a second consecutive month to +0.7% y/y in July. Yet, it is estimated to have rebounded strongly to +1.6% in August. Inflation expectations have remained firm. The 5y5y breakeven inflation rate has resumed the rise after the correction from May’s peak. Meanwhile, weakness in the euro over the past months should have somehow supported the price level. 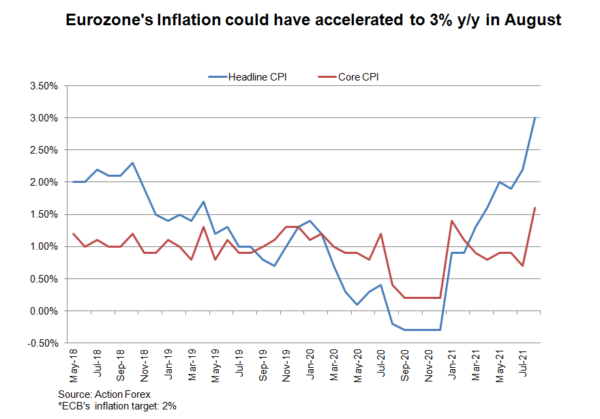 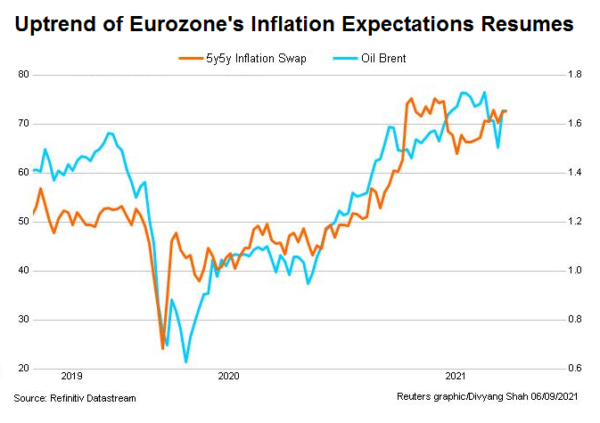 Various economic indicators have pointed to continued improvement in the third quarter. The IHS Markit composite PMI eased slightly to 59 in August, from a 15-year high of 60.2 in July. The services PMI also slipped mildly to 59 from July 59.8.
The readings nonetheless are among the fastest growth rates in the region over the past decade. Meanwhile, the manufacturing PMI slipped -1.4 points to a 6-month low of 61.4 in August. The accompanying report acknowledged the “solid” growth in the region’s activities which continued to “point to rapid rates of expansion in output and demand”. While noting that “the benefit of looser lockdown restrictions has fuelled two of the best expansions since mid-2006 in July and August”, the report also cautioned that that this growth momentum was “fading”. Separately, the unemployment rate dropped to 7.6% in July, from 7.8% a month ago. 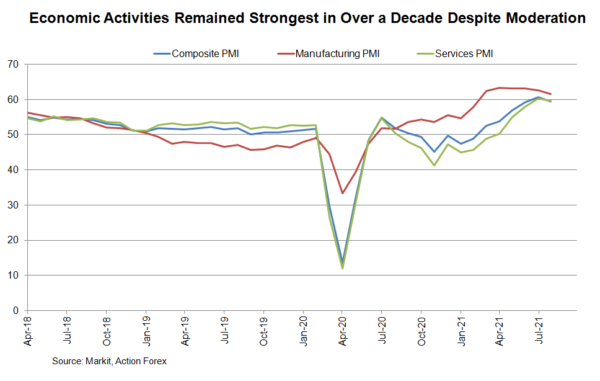 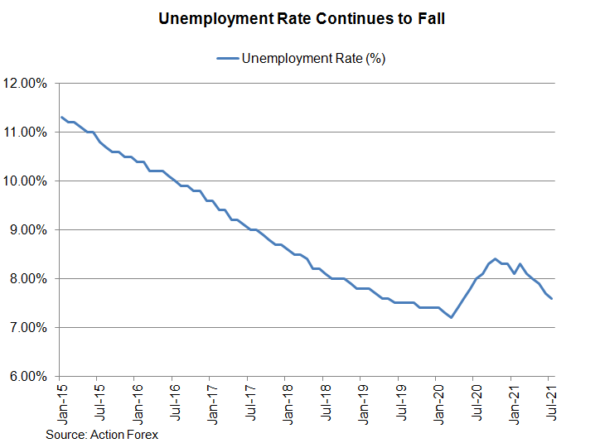 Against this backdrop, we expect the central bank to upgrade its GDP growth and inflation projections for this year and in 2022, while the forecast for 2023 should remain largely unchanged amidst uncertainty related to the pandemic.