hese have triggered speculations of a less loosening monetary policy by the PBOC. In its latest quarterly report, the central bank noted economic recovery in the first quarter and acknowledged the effects of recent easing measures. While pledging to maintain sizable liquidity in the market, PBOC would likely be more cautious in adding further stimulus. 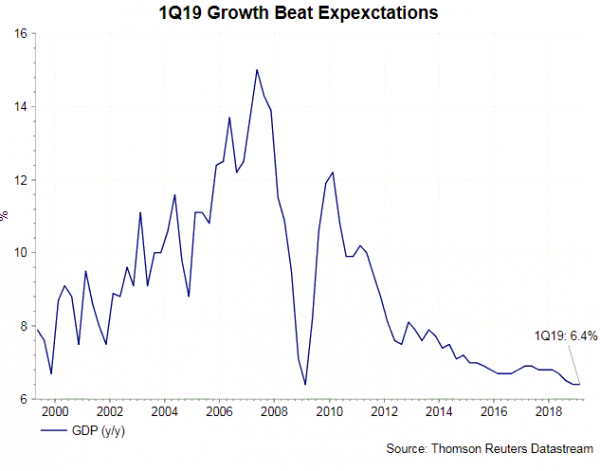 Economic developments generally improved in March. Industrial production jumped +8.5% y/y in March, beating consensus of +5.9% and marking the fastest growth since July 2014. Retail sales gained +8.7% y/y, compared with expectations of +8.4%. Urban fixed asset investment (FAI) expanded +6.3% y/y in the first 3 months of the year. The growth came in line with expectations but improved from the +6.1% growth in the first two months of the year.

Released in the prior week, Headline CPI rebounded to +2.3% y/y in March, from the average of +1.6% in January- February. This also improved from +2.2% in 4Q18. Yet, the strong price level was lifted by the sharp increases in pork prices and energy prices. Note that core inflation remained relatively stable at +1.8%, as volatile food and energy prices were excluded. For the months ahead, although food and energy prices could still boost headline inflation, this would be partly offset by VAT cut. Effective April 1, the government has lowered the manufacturing sector VAT by 3 percentage point to 13%. All in all, the net effect could still cap China’s inflation below the +3% target.

The credit report in March also shed a positive light. Total social financing improved to RMB 2, 860B in March, from RMB 703B a month ago, predominantly driven by acceleration in bank lending. Money supply M2 expanded +8.6% y/y, accelerating from +8% in February.

The apparently strong recovery in March has lifted the first quarter GDP growth. This has also raised speculations that PBOC would adopt a less accommodative policy. We refrain from overtly optimistic about China’s economic outlook. After all, the improvement in March is compared with a low base. A relatively-stronger March has been far from indicating China’s slowdown has ended. As such, we do not expect PBOC to shift from its easing monetary stance. Rather, it would be more cautious in adding more stimulus, while maintaining sufficient liquidity, to the market.