PBOC has recently made some changes in its interest rate policy. Following the move to link the loan prime rate (LPR) to open market operations, the medium lending facility (MLF) rate, the central bank over the weekend announced the plan to set a floor for mortgage rate. The first change essentially lowers banks’ lending rates to corporations to encourage investment in light of trade war and rapid economic slowdown. The second change aims at curbing housing prices. We do not see the changes make any difference from PBOC’s ad hoc policy style, let alone an attempt to liberalize the monetary system.

On August 17, PBOC announced that it would set its loan prime rate (LPR) according to the medium lending facility (MLF) rate. From August onwards, the central bank will fix its LPR on the 20th of each month, using quotations submitted by 18 banks. The new fixing mechanism began last week with the one- year LPR set at 4.25%, down -6 bps from the previous day. This also has narrowed the spread with MLF rate to 95 bps from 101 bps. Meanwhile, the new five-year LPR rate was set at 4.85%, down -5 bps from the previous day. Banks retains the liberty to price loans with maturities of less than 1 year and within 1-5 years. During the weekend, PBOC also set a floor on the mortgage rate, in an attempt to prevent housing market bubble. From October 8, the country’s mortgage rates would be linked to LPR. Rates for first-time home buyers cannot be lower than LPR while rates for second- time home buyers cannot be lower than LPR+60 bps.

Coming in a week ahead of China’s announcement of retaliatory tariff on US exports, the new LPR system is a monetary easing measure. Facing challenges of rapid economic slowdown and soaring debts, the authority has pledged to adopt a “prudent” monetary policy and ruled out the use of flood-like stimulus policies. While allowing the renminbi to weaken, PBOC has been reluctant to announce cutting the policy rate directly amidst concerns over rapid capital outlook. Yet, we view this new LPR system is an indirect way of rate cut and definitely a measure of monetary easing.

Rather than determined by demand and supply conditions, pricing of USDCNY is set daily by the authority. The exchange rate is then allowed to move 2% above or below the fixing rate. Since the break above 7 in early- August, USDCNY has risen -2%. The pair gained for 9 days and dropped for 5 days, signaling the government’s intention to let renminbi depreciate. The answer to the question of whether the reduction in LPR should cause further weakness in reminbi is not straightforward. Lower interest rate will lead to weaker currency in China only if the government allows. What we are certain is that both lower LPR and weak renminbi, in addition to RRR cuts, are  PBOC tools to stimulate the economy in light of a full- blown trade war with the US. 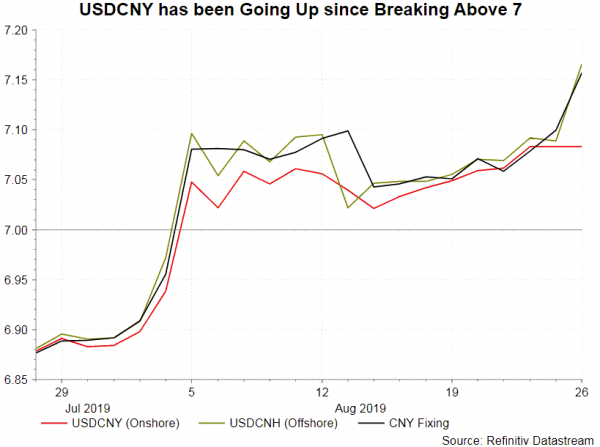 Not a Step Forward to Interest Rate Liberalization

The move has made no change in the lack of transparency and authority- determined monetary policy in China. This move might only be a temporary change in light of the current economic situation. LPR is the best interest rates that banks charge its corporate clients. It is not the central bank’s policy rate. Moreover, LPR is set to linked with the MLF, a medium- term lending rate. We can hardly consider this as PBOC’s policy rate. Indeed, central banks usually choose a short-term, or overnight, interest rate as policy rates. While there has been no confirmation, the market generally believes that the 7-day repo is PBOC’s policy rate. Such rate has stayed unchanged since the +5 bps increase in April 2018. It is therefore premature to assume than such change is a more forward to the interest rate liberalization progress. We are not confident that the new LPR policy would sustain. Recall the introduction of the “counter-cyclical factor” in the renminbi reform, PBOC introduced this component in it renminbi fixing mechanism in June 2017. This component was then withdrawn in January 2018 and re-introduced in August 2018. This marks a good example of how ad hoc China’s monetary policy is. After all, the purpose of all the moves is to tackle the economic problems in the short- to medium- term, without the long-term goal of making concrete reform.