Signing of the Phase I trade deal marks an end of the beginning the trade war between the US and China. While the deal covers various areas of great concerns to the US, including China’s imports of US goods and services, China’s handling of intellectual properties, technological transfer and the financial services industry, and renminbi movement. Execution of the promises remains to be seen.

China’s purchase of US goods and services

The US agrees to remove China from the list of currency manipulator. In return, China would maintain stable movement of its currency, renminbi. The provisions on exchange rate are only general, including commitments to promote autonomy in monetary policy, implementation of sound macroeconomic policies and a resilient international monetary system. Both sides also agreed to “avoid manipulating exchange rates or the international monetary system in order to prevent effective balance of payments adjustments or to gain an unfair competitive advantage”. Such provision, however, has been agreed upon in the G20 and as IMF members. We expect China has the incentive to maintain a less weak renminbi in the coming years. First, excessive weakness of renminbi would create a vicious cycle, aggravating capital outflow in China. Second, a higher renminbi is needed to increase the attractiveness of US imports, thereby, facilitating China’s increase in purchase in the coming 2 years. 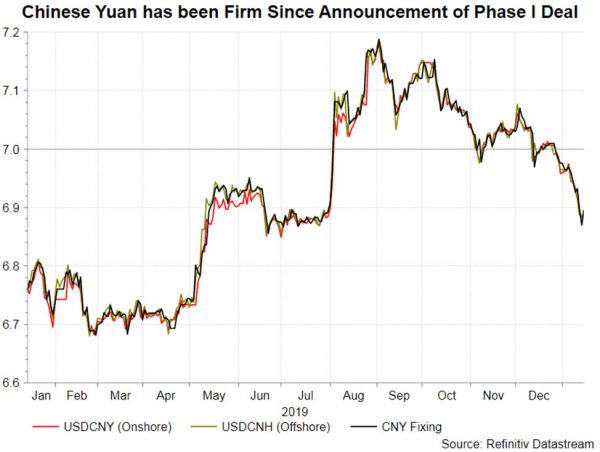 Back in March 2018, the US launched a Section 301 investigation on China’s practices on intellectual properties (IP), technology transfer and financial services sector. The findings revealed that China has consistently failed to protect intellectual properties. It has also adopted forced technology transfer, requiring foreign companies to disclose details of core technological knowledge to indigenous companies in China. On the financial services sectors, China has never truly opened its market. Foreign financial corporations seeking to do business in China have to engage in JVs with indigenous companies, and are not allowed to hold majority shares.

As suggested in the Phase I deal, both parties “shall ensure fair, adequate, and effective protection and enforcement of intellectual property rights”. This signals that China would have to tighten its IP rules, guard against infringement and counterfeiting in e-commerce, piracy, and counterfeiting. On technology transfer, both parties agreed that neither “shall require or pressure persons of the other party to transfer technology to persons in relation to acquisitions, joint ventures, or other investment transactions”.

On financial services, China “shall allow branches of US financial institutions to provide securities investment fund custody services”. This should begin within 5 months after entry of the agreement. Meanwhile, US corporations will be allowed to apply for asset management company licenses that would allow them to acquire non-performing loans directly from Chinese banks. By April 2020, China has agreed to allow wholly US-owned insurance companies to operate. US firms will also be permitted to operate in the securities, fund management, and futures sectors.

The US agreed to reduce tariffs on some imports from China beginning on February 15. Tariffs scheduled on December 2019 will be postponed indefinitely. Meanwhile, those imposed in September 2019 on Chinese imports worth of $120B would be halved to 7.5%. However, tariffs imports in 2019 on about $250B worth of Chinese imports would remain.

The Phase I trade agreement has covered extensively the areas of greatest concerns of the US. However, the language of the provisions is rather vague without concrete action plan. We believe execution is the key issue as China has the history of not keeping its promise in international agreements.