PBOC left the loan prime rate (LPR) unchanged at 3.85% in July. The inaction does not suggest that the current monetary policy is appropriate. Weakness in economic activities is expected to exacerbate in the second half of the year, thanks to the resurgence of the pandemic and the lingering consequences of the flood. Speculations of a rate cut have recently heightened, sending renminbi to lowest in 3 weeks against the US dollar. 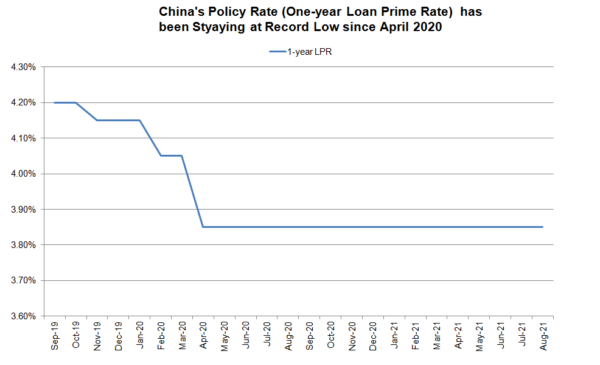 Economic data released earlier in the week signaled a bad start of the third quarter. Industrial production (IP) grew +6.4% y/y in July, moderating from +8.3% a month ago. This also missed consensus of +7.9%. The slowdown was broadly based. For instance, the growth in machinery manufacturing sector eased amidst slower export growth. Coal mining activities weakened as the government tightened policy for environmental protection. Moreover, automobile manufacturing contracted -8.5% y/y during the month as a result chip shortage. 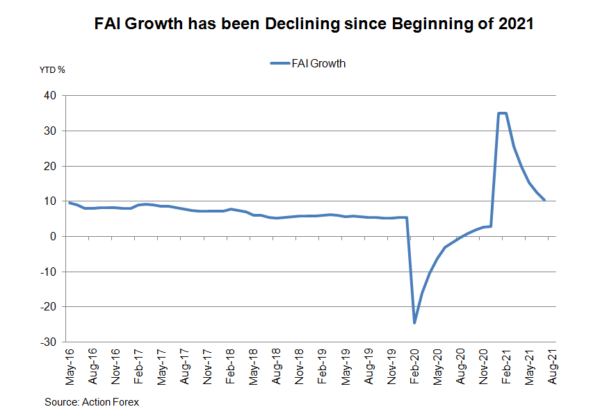 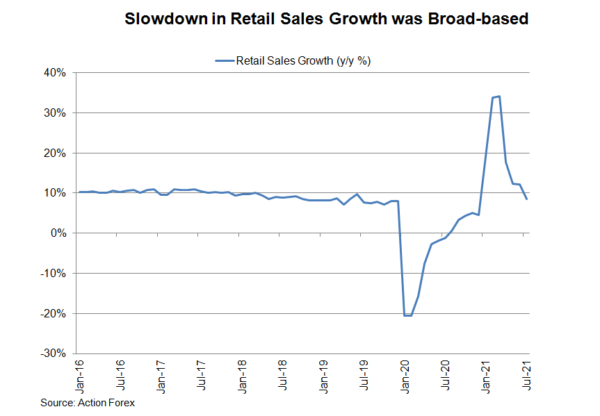 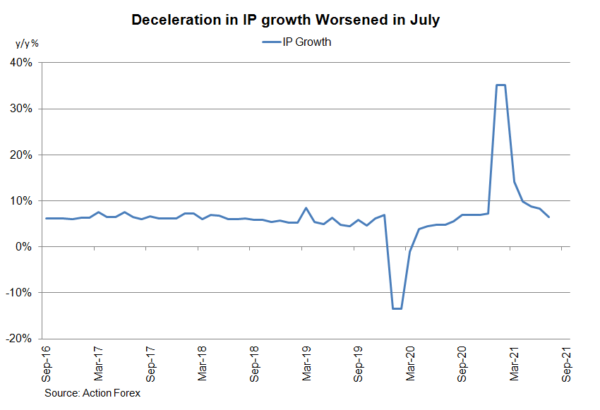 Retail sales expanded +8.5% y/y in July, worse than consensus of +10.9% and June’s +12.1%. Looking into the details, sales in clothing and smartphones worsened significantly. Growth in the former moderated to +7.5% y/y from June’s +12.8%. The latter only edged +0.1% y/y higher, compared with June’s +15.9%. Meanwhile, automobile sales among enterprises of a minimum size contracted – 1.8% y/y, after a +4.5% growth in June. Growth in catering sales also decelerated to +14.3% from June’s +20.2%. Online goods sales only expanded +11.0% y/y in July, compared with +14.6% in the prior month. We believe the moderation in retail sales growth revealed fragile consumer confidence, probably amidst concerns over resurgence of the pandemic.

Fixed asset investment rose +10.3% y/y in the first 7 months of the year. Specifically, investment in manufacturing and infrastructure grew +17.3% and +4.6%, respectively. In order to stimulate the economy, the government has sped up the approval process of investments. In July, investment worth of CNY 58.2B was approved, up about +50% from the prior month. The State Council noted earlier this week that it would increase effective investment by better utilizing local government special-purpose bonds, which are issued mainly to fund infrastructure projects.

Weakness in July’s data was mainly driven the massive flood in central Henan province that caused at least 302 deaths and nearly 9K home damage. The aftermath of the flood should continue dampen economic activities in coming months. Additionally, the resurgence of the pandemic has spread to all over China. Economic impacts of renewed lockdowns and social distancing restrictions would gradually be revealed in coming months.

The PBOC would have to loosen its monetary policy to boost growth. It has been doing so indeed. While keeping the MLF rate unchanged, the central bank on Monday injected CNY600B into the financial system via the facility, close to the CNY700B maturing the day after. This came in more than expectations of CNY500B. The move pressured bond yields and Chinese yuan. We expect the central bank would announce further reduction in the reserve requirement ratio (RRR) in coming months.