Overshadowed by a series of central bank meetings last week, China’s macroeconomic data were mildly disappointing. Yet, this should not affect the country’s growth to reach its full-year growth target of +6.5%. Indeed, the PBOC’s monetary tightening on December 14, closely following the Fed’s rate hike, is a manifestation that the government remains confident over the economic outlook. The three-day Central Economic Work Conference (CEWC) beginning today (December 18) would reveal China’s economic policy and the closely-watched GDP growth target for 2018. We expect the politburo might revise lower the target from this year’s +6.5%, and/ or adopt more flexibility in it language.

Industrial production (IP) expanded +6.1% y/y in November, weaker than consensus of, and October’s, +6.2%. IP growth was weighed down by the anti-pollution campaign as northern China during the winter heating season. Retail sales rose +10.2% y/y in November, improving from +10% in October. However, this also missed expectation of +10.3%. Improvement in retail sales growth was undoubtedly helped the “double-11” festival, of which the effect was exemplified in the rebound in November PMIs (https://www.actionforex.com/action-insight/china-watch/60756-china-s-november-pmis-helped-by-double-11). Urban fixed asset investment (FAI) growth eased further to +7.2% y/y in the first 11 months of the year, compared with consensus of +6.2%. Growth was +7.3% in the first 10 months of the year. Deceleration in FAI growth has been the theme this year as the government cracks down property investment with the aim of deleverage. The moderation was further facilitated by the suspension of construction activities in northern China. 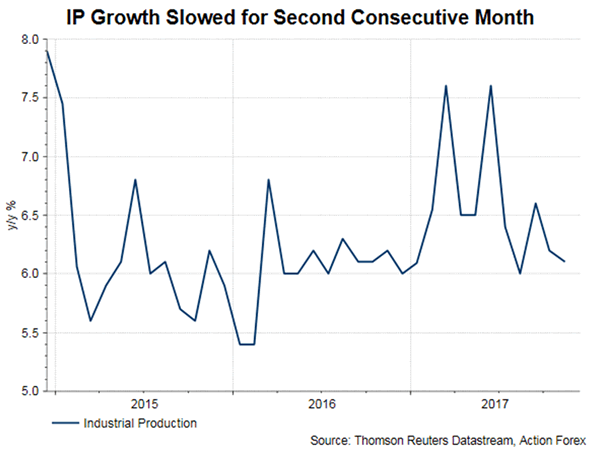 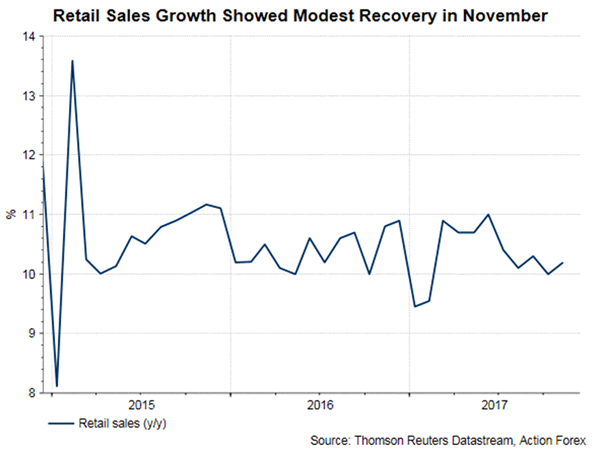 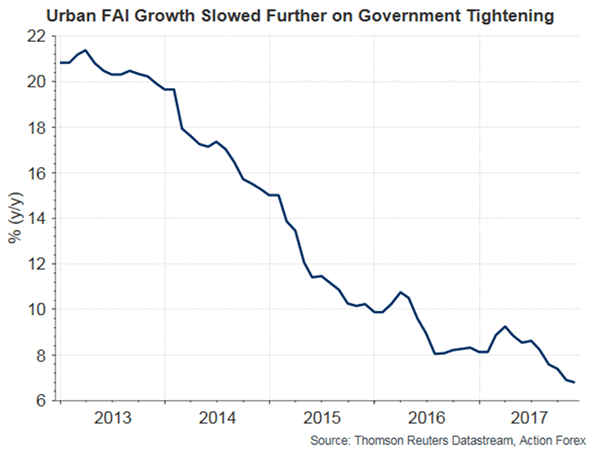 The PBOC lifted the 7-day and 28-day OMO reverse repo rates by 5 bps to 2.5% and 2.8% respectively. It also raised the 1-year MLF rates by 5 bps to 3.25%. These were in response to the Fed’s 25-bps rate hike in the prior day. Note that the PBOC has raised the policy rates for three times this year. The previous two times were the 10-bps hikes in the OMO and MLF rates in February and March. As suggested in the accompanying statement, the rate hikes last week was partly driven by the Fed’s rate hike. The PBOC stressed that it does not follow closely the monetary policy of the Fed, citing the inaction after Fed’s June rate hike. More importantly, the rate hike was in response to the market rates which have been markedly higher than those guided by the central bank. Despite the fact that the rate hikes came in lower than consensus, PBOC believed that it would help discourage leveraging and excessive credit expansion (http://www.pbc.gov.cn/goutongjiaoliu/113456/113469/3440258/index.html). 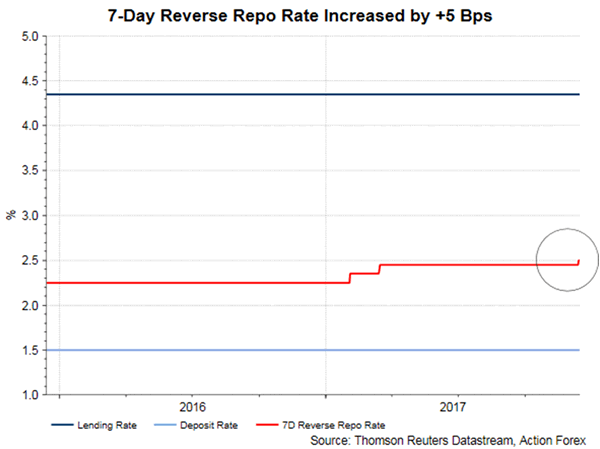 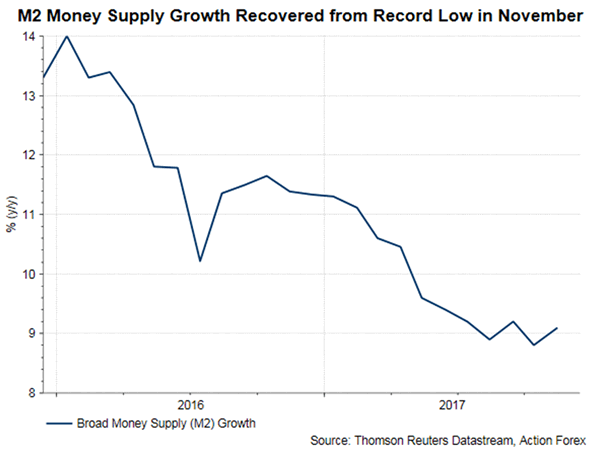 The annual Central Economic Work Conference would set the agenda for the economy of China and its financial and banking sector. Indeed, the theme of the agenda should echo what was announced in the 19th Party Congress in October and the 25-member politburo meeting last week. We believe the key policies should aim at reducing risks and deleveraging, eradicating poverty and preventing pollution.

Bank of Canada Brings Policy Rate Back to Crisis Low