Asian markets open the week rather firmly, shrugging of the Trump triggered chaos in G7 leaders meeting over the weekend. At the time of writing, Nikkei is trading up nearly 0.6% while HK HSI is up 0.28%. Focus has quickly turned to Kim-Trump summit in Singapore but that’s unlikely to prompt much market actions. Instead, the focuses will be on FOMC and ECB meeting later this week plus a bunch of heavy weight data from US and UK. For now, Euro is trading as the strongest one as lifted by Italy seems not moving towards an Euro exit.

Euro open the week higher as lifted by comments from Italian Economy Minister Giovanni Tria as he ruled out Euro exit. Tria said in interview by Corriere della Sera newspaper that “the position of the government is clear and unanimous” and “there is no question of leaving the euro.” And, “the government is determined to prevent in any way the market conditions that would lead to an exit materializing”.

He added that “it’s not just that we do not want to leave, we will act in such a way that the conditions do not get anywhere near to a position where they might challenge our presence in the euro.”

Regarding economic fiscal policies, Tria said “our goal is growth and employment. But we do not plan on reviving growth through deficit spending.” And he emphasized that “these will be fully coherent with the objective of continuing on the path of lowering the debt/GDP ratio.”

Trump used Trudeau as scapegoat to withdraw from G7 statement

The G7 leader summit in Charlevoix originally ended with a unified communique, pledging to recommit to “rules-based international trading system” and to “continue to fight protectionism.” The leaders also agreed to “strive to reduce tariff barriers, non-tariff barriers and subsidies. They also addressed issues including “non-market oriented policies and practices”, and “inadequate protection of intellectual property rights”, “forced technology transfer or cyber-enabled theft”. The group also called on all members of the ” Global Forum on Steel Excess Capacity to fully and promptly implement its recommendations”. Also, it urged to “avoid excess capacity in other sectors such as aluminum and high technology”. That seems clearly directed at China.

But later in a press conference, Canadian Prime Minister Justin Trudeau reiterated the country’s own plan on retaliation to US steel tariffs. Trump used that Trudeau as the scapegoat to overturn his own agreement to the whole G7 group statement and withdrew from it. Trump than launched personal attack on Trudeau in multiple tweets even though Canadian Foreign Minister Chrystia Freeland made it clear that “Canada does not conduct its diplomacy through ad hominem attacks, particularly as a close ally”. .

Trump’s sudden withdrawal also drew strong criticism from others. German Chancellor Angela Merkel said in a TV interview that “the withdrawal, so to speak, via tweet is of course … sobering and a bit depressing.” But she maintained that EU is preparing counter-measures against US steel and aluminum tariffs and added ” we won’t let ourselves be ripped off again and again. Instead, we act then too.”

Trade war between US and its allies is still on as EU, Canada, Mexico, and even Japan are on track for “retaliatory measures and actions.”

Now, North Korean leader Kim Jong-un and US President Donald Trump have arrived in Singapore for the Kim-Trump summit on June 12. The North Korean state media KCNA said today that both will exchange “wide-ranging and profound views” to re-set relations” and hailed the summit as part of a “changed-era”. KCNA also said both will discuss “the issue of building a permanent and durable peace-keeping mechanism on the Korean Peninsula, the issue of realizing the denuclearization of the Korean peninsula and other issues of mutual concern.”

Malaysian Prime Minister Mahathir Mohamad is having his first foreign trip after election and is in Japan today. He said the Trans Pacific Partnership needs to be renegotiated because “smaller countries would have the chance to compete because they would be given certain handicaps.” He emphasized “small countries cannot compete on the same terms as bigger countries.”

Mahathir, aged 92 and became Prime Minister for the second time last month, would also like to have a second push to his favored broad trade pact such as the East Asian Economic Caucus (EAEC), which he proposed during his previous administration. He noted that “yes, I am still in favor of EAEC. In the past, of course, we were not able to do this due to the objections of America, but now America seems to become isolationist again so it is not in a position to demand that we cannot form EAEC.”

The hawkish arm of Chinese state media, Global Times, said in an editorial that the Shanghai Cooperation Organisation (SCO) summit was “full of enthusiasm and ambition”. It added that “the key lies in that the Shanghai Spirit, featuring mutual trust, mutual benefit, equality, consultation, respect for cultural diversity and pursuit of common development, echoes the theme of the era, in which unilateralism can hardly prevail.”

The more diplomatic China Daily newspaper said “against the backdrop of rising unilateralism and anti-globalization, the SCO’s opposition to trade protectionism in any form is especially encouraging.” And, “the G7 summit has served as another reminder that it is the Trump administration that is challenging the international rules-based order.” “Considering that the Trump administration has also instigated trade disputes with other countries such as China, the global backlash against Trump’s unilateralist tendencies is gaining momentum. The international community should rally and reject the self-oriented closed-door policies of the US”.

This week’s calendar – Big for Dollar, Euro and Sterling

The upcoming week is highly important for Dollar, Euro and Sterling. Fed is widely expected to raise interest rate by 25bps to 1.75-2.00%. There is practically no chance of a disappointment there. The new economic projections should reveal how likely it is for the third rate hike this year in September, and the fourth in December. That might also be affected by May CPI reading to be released a day earlier.

ECB’s judgement day on its EUR 30B per month asset purchase program will determine Euro’s direction. Expectations were set up high by Chief Economist Peter Praet’s comment last week. But are all policy makers confident enough to stop the asset purchases after September? If not, would they taper and extend the program? To us, it doesn’t make much chance to taper the program and run it for anything less than six months. And if that’s the case, the timing of the first hike of would be pushed farther away. Either case, stop in September or taper and extend, the Euro will likely have violent move.

Let’s not forget BoE too. The chance of an August hike is still on. But that would be highly, highly data dependent. UK data will start with productions today, employment and wage growth tomorrow, CPI on Wednesday and retail sales on Thursday. After this week, we’ll likely know whether August is still the timing for a hike.

Other key events include BoJ meeting, Australia employment, a batch of China data etc. Here are some highlights for the week ahead: 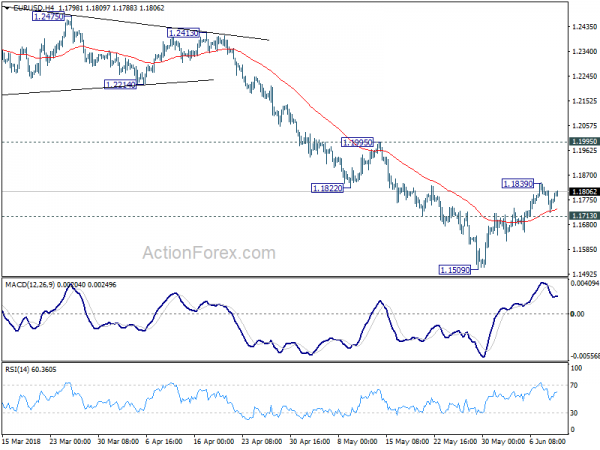 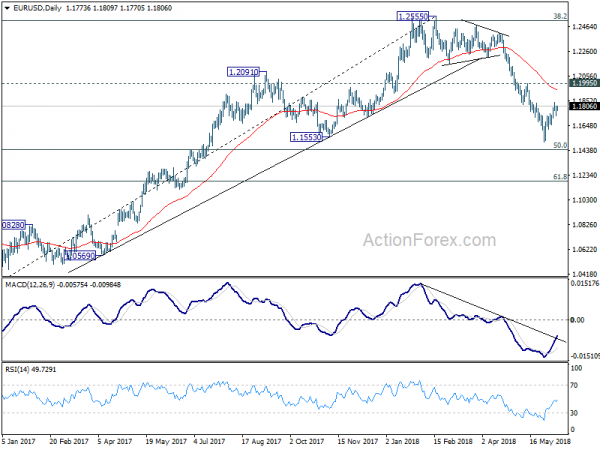