While the spats between US and G6 countries made a lot of headlines, they’re not much bothered by the market-smart investors who know what are important. The summit between North Korean Leader Kim Jong-un and US president Donald Trump is currently in the spotlight. But it will likely fade into darkness quickly too. There are a number of important events this week. And Sterling is already hit but a batch of weaker than expected data. Euro, on the other hand, is the strongest one as risk of Italian existing Eurozone receded. But there is no clear follow through buy, not even in EUR/GBP, as ECB risks loom. Dollar is also mixed ahead of FOMC rate decision, economic projections and press conference.

Technically, 1.3347 in GBP/USD will be a focus in the US session. The pair breached this level but recovered quickly. Firm break of 1.3347 should confirm completion of the corrective rise from 1.3203. And by then, we could see downside accelerate through 1.3203 low.0.8844 in EUR/GBP is another level to watch as firm break there will finally confirm resumption of near term rebound from 0.8620.

NIESR said UK GDP is estimated to have grown 0.2% in the three months ending May, following 0.1% grow in the three months ending April. Amit Kara, Head of UK macroeconomic forecasting, said, growth slowed “materially” since the start of the year and remains weak. In additional to severe weather in March, latest data also showed slowdown in manufacturing, driven by both domestic and external conditions. Accommodative monetary policy would help to strength the economy ahead. But risks are “weighed to the downside”. Brexit is the most important risk but there were also “escalation of tensions in international trade and a potential flare-up in uncertainty in the Euro Area because of political developments in Italy.”

The real tests will lie in tomorrow’s employment data and Wednesday’s inflation data. Average weekly earnings including bonus are expected to grow 2.6% 3moy in April. Weekly earnings excluding bonus are expected to growth 2.9% 3moy. Both are unchanged from March’s readings. CPI is expected to rise back to 2.5% yoy in May, up from 2.4% yoy. CPI core is expected to be unchanged at 2.1% yoy. For now, a BoE August hike is still on the table. But after the data, we’ll pretty know if there is still such a chance. Retail sales will be featured later in the week but that’s less important.

FOMC and ECB meeting the highlight of the week

There are more things to care in the week than the Kim-Trump summit. A rate hike of 25 bps at the upcoming FOMC meeting this week is a done deal as the market has for months priced in over 90% chance of its occurrence. Recent macroeconomic developments indicate such rate hike is totally justified. The focuses are on the forward guidance on the future path of normalization and the updated economic projections. We expect the members to upgrade the economic growth and inflation assessment. It is also prudent to make some changed on the forward guidance, to illustrate that the rate- hike process since the end of 2015 has taken the policy more closely to “neutral” than years ago. More in FOMC Preview – Fed’s Rate Hike A Done Deal, Focus Turned to Forward Guidance.

The recovery in euro since late-May gathered momentum last week after ECB Chief Economist and executive board member Peter Praet signaled the central bank would discuss QE tapering at this week’s meeting. We are not surprised by this as it is appropriate for the members to communicate with the market its next week after the current asset purchases end in September. We believe July would be a better time for the announcement as the members could assess more indicators before making a decision. This is particularly important at the current period of economic growth slowdown, rising protectionism from the US and ongoing political uncertainty in the peripheral Eurozone. More in ECB Preview – Members to Discuss QE Tapering This Week, Attention Moves to Rate Hike Path and Forward Guidance.

Mexican Guajardo to engage strongly in July on NAFTA

Mexican Economy Minister Ildefonso Guajardo said Mexico, Canada and the US will be “engaging strongly” later in July to work on a NAFTA agreement that ‘s “feasible, workable and benefits the three nations involved.”

He added that “the only way we will find that solution is if countries involved have sufficient flexibility to be able to find that narrow strip where we have to land.”

And he warned that “an agreement that does not give us certainty, does not give us rules that have to be obeyed and mechanisms to settle disputes will not be of help for the business community.”

New Zealand Parker: None of us can beat globalization

New Zealand Trade Minister David Parker urged the world to stand up to defend rules-based trade system. And he added that “none of us can beat globalization”. He noted that “what’s happening in the world worries me. But the world is already developing alternatives like CPTPP”.

Malaysian Prime Minister Mahathir Mohamad said the Trans Pacific Partnership needs to be renegotiated because “smaller countries would have the chance to compete because they would be given certain handicaps.” He emphasized “small countries cannot compete on the same terms as bigger countries.”

Mahathir, aged 92 and became Prime Minister for the second time last month, would also like to have a second push to his favored broad trade pact such as the East Asian Economic Caucus (EAEC), which he proposed during his previous administration. He noted that “yes, I am still in favor of EAEC. In the past, of course, we were not able to do this due to the objections of America, but now America seems to become isolationist again so it is not in a position to demand that we cannot form EAEC.” 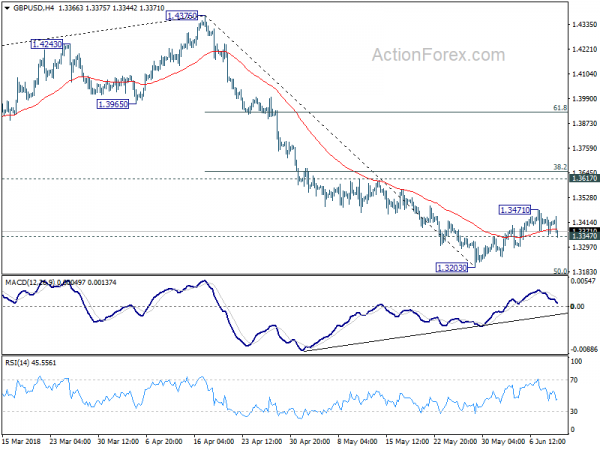 In the bigger picture, current development suggests that whole medium term rebound from 1.1936 (2016 low) has completed at 1.4376 already, with trend line broken firmly, on bearish divergence condition in daily MACD, after rejection from 55 month EMA (now at 1.4223). 61.8% retracement of 1.1936 (2016 low) to 1.4376 at 1.2874 is the next target. We’ll pay attention to the reaction from there to asses the chance of long term down trend resumption. For now, outlook will stay bearish as long as 1.3617 resistance holds, even in case of strong rebound. 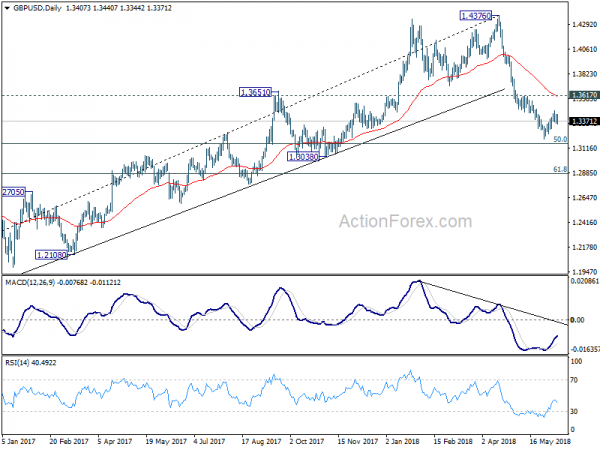