Biggest movements were actually seen in bond markets on safe haven flow. US 30 year yield dropped -0.071 to close at 2.842. US 10 yield also lost -0.073 to close at 2.179. 10 year yield’s correction from 2.615 is still on course to 2.13 fibonacci level. In addition to risk aversion, markets are also paring bets on a June Fed rate hike. Fed fund futures is now pricing in only 44.7% chance of that, comparing to over 60% chance last month. Japan 10 year bond yield also briefly touches zero percent today, first time since last November. In the currency markets, Sterling remains the strongest one as boosted by the snap election news. Strength in the British Pound lifted Euro and Swiss Franc higher. Aussie and Loonie are trading as the weakest ones.

UK PM Theresa May announced yesterday that she would seek MPs’ support for an early general election to be held on June 8. The news came in less than a month after her affirmation that "the next election will be in 2020". The rationale behind such move is to consolidate her power after Brexit was formally triggered in late March. A landslide victory of the Conservative Party would strengthen May’s mandate in the 2-year Brexit negotiations.

The strong rally of the sterling suggested that the market was confident that the election would serve its purpose. Indeed, latest opinion polls showed that 44% of the British people support Conservatives, compared with Labor’s 23%. Support for LibDem stayed at low teen. Meanwhile, 50% of interviewees indicated that May would make the best PM Minister, compared with 14% for Labor’s Jeremy Corbyn.

It is usually positive for a country’s currency if the ruling party retains power in an election, as it means lower uncertainty. Sterling’s volatility would remain elevated from now until the election. Yet, short-term rebound does not alter the currency’s long-term bearishness should the tough Brexit negotiations eventually return to the spotlight.

EC Tusk: "It was Hitchcock, who directed Brexit"

In response to the news, European Council President Donald Tusk’s spokesman said that "the UK elections do not change our EU27 plans." And, "we expect to have the Brexit guidelines adopted by the European Council on 29 April and following that the Brexit negotiating directives ready on 22 May. This will allow the EU27 to start negotiations." Tusk tweeted with his own account that he had a "good" conversation with May after the announcement. But his also tweeted that "it was Hitchcock, who directed Brexit: first an earthquake and the tension rises."

Kansas City Fed President Esther George said yesterday that "the economy has these fits and starts and we’ve seen this over the last five years." And, while first quarter "looks soft" Fed shouldn’t "over-interpret" the data. "For the year as a whole, I still see consumer spending in a way that should carry the economy forward." Meanwhile, George also said that "balance sheet adjustments will need to be gradual and smooth, which is an approach that carries the least risk in terms of a strategy to normalize its size." And, "importantly, once the process begins, it should continue without reconsideration at each subsequent FOMC meeting. In other words, the process should be on autopilot and not necessarily vary with moderate movements in the economic data."

GBP/JPY rises to as high as 140.01 so far, just inch below 140.08 near term resistance. Current developments argues that consolidation pattern from 148.42 is possibly completed at 135.58, just ahead of 135.39 fibonacci level. Intraday bias stays on the upside and break of 140.08 will affirm this case. GBP/JPY should then target a test on 148.42 key resistance level. Meanwhile, this bullish case will be favored as long as 137.33 minor support holds, in case of retreat. 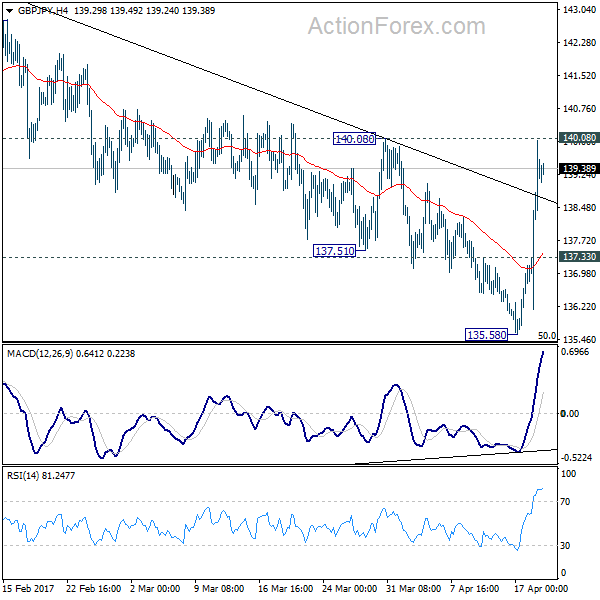 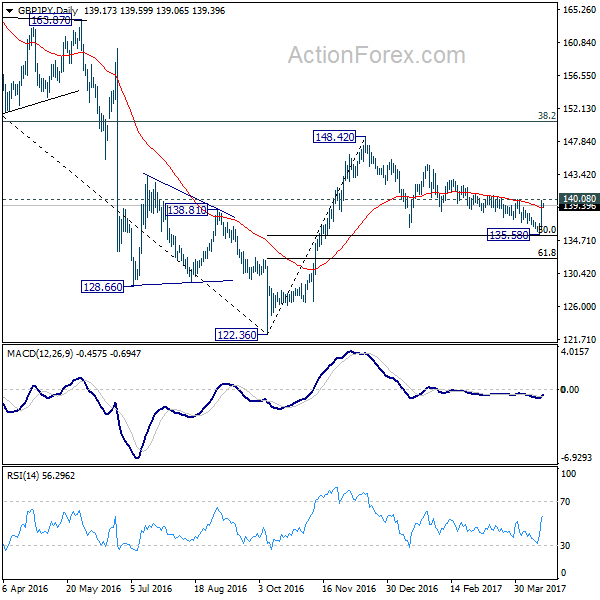