French stocks and Euro surges as pro-Euro centrist Emmanuel Macron performed well in the final TV debate against EU-sceptic far-right Marine Le Pen. CAC is trading up 0.95% at the time of writing and hit the highest level in more than nine years. According to a viewers poll by French broadcaster BFMTV, 63% of viewers voted Macron as the "most convincing" of the pair after the debate. According to latest running poll average, Macron is still having 18% lead over Le Pen and is still widely tipped to win the presidential election this Sunday. Released from Eurozone, retail sales rose 0.3% mom in March. Eurozone services PMI was revised higher to 56.4 in April. Italy services PMI rose sharply to 56.2 in April. Also from Europe, SECO consumer confidence dropped to -8 in April.

UK PMI services rose to 55.8 in April, up from 55.0, and beat expectation of 54.6. That’s also the highest level this year. Markit noted that "UK business activity growth gained momentum for a second successive month in April, with a hat-trick of faster growth signalled by the three PMI surveys." And, "the improvement in the survey data indicates that economic growth has revived after having slowed sharply in the first quarter of the year." Countering weakness in household-facing business, UK economy could achieve 0.4% growth in Q2 as a whole. Also from UK, mortgage approvals dropped to 67k in March. M4 Money supply rose 0.3% mom in March.

Recent decline in Australian dollar is viewed as a catch-up of the selloff of the iron ore price from its February peak. Spot price for 62% benchmark iron ore slumped more than 30% in 2 months after reading a peak of US$90/tones on February 21. During the period, AUDUSD had been trading within a broad range and dropped around -2%. The relatively resilience in Aussie was likely driven by the broad-based weakness in the greenback as soft dataflow had diminished expectations of a rate June rate hike. Recall the selloff of iron ore prices accelerated in March, after China’s pledge reduce steel capacity. The tighter liquidity conditions in China’s money markets have reinforced concerns over the government’s efforts to crack down the steel industry. More in Australian Dollar Dived On Concerns Over China’s Iron Ore Demand Outlook

EUR/USD recovers strongly today after being supported above 4 hour 55 EMA. But it’s staying below 1.0949 temporary low. Intraday bias remains neutral for the moment. At this point, further rise is still in favor as long as 1.0851 minor support holds. However, choppy rebound from 1.0339 is seen as a correction. Hence we’d look for topping again on next rise. Meanwhile, on the downside, break of 1.0777 will turn turn bias to the downside for 1.0851 support first. 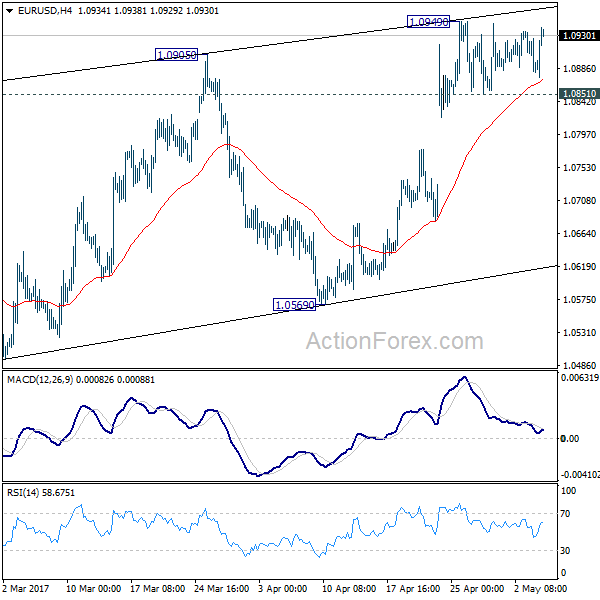 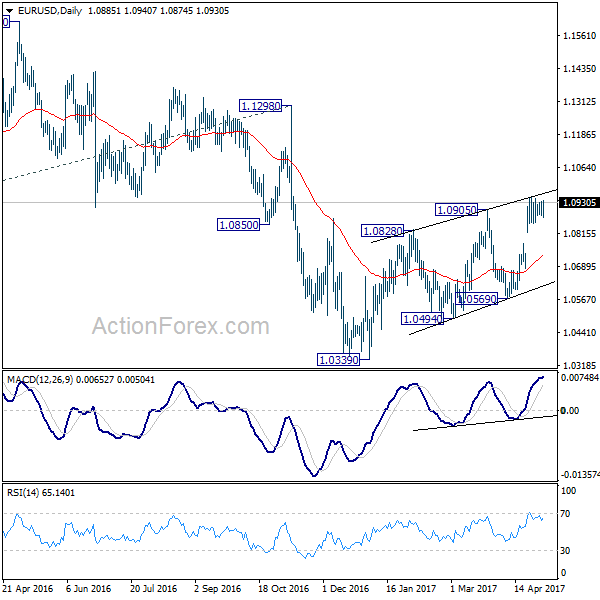