Sterling continues show a lot of resilience today. In despite of weaker than expected August GDP report, as well as mixed productions data. the Pound manages to trade as the strongest one for today. Optimism on Brexit negotiation is a factor as there are rumors flying around, hailing progress made. But it should be noted that no details whatsoever on the so call progress are reported. Instead, Brexit Minister Dominic Raab sounded rather clear he’s not shooting for a deal within this month, but next. And after all the nice words, EU would have to do what Raab said, that is, meet them “half way”, or there won’t be any deal.

For now, Euro is taking turn to be the strongest one for today with Sterling. As noted before, we believed that selling climax in Italian bonds is passed temporarily. German-Italian spread is back below 300 today. But Italy and Euro are both still vulnerable as credit agencies are lining up to publish their review on Italy towards the end of the month. Dollar is trading slightly firmer today. But it’s for now seen as a leg in consolidative pattern, which doesn’t warrant a breakout from range yet. Mixed PPI data from US also provides no help to the greenback. Yen, New Zealand and Australian Dollar are the weaker ones.

US Treasury Secretary Steven Mnuchin warned China in a Financial Times interview on currency manipulation. He said that “as we look at trade issues, there is no question that we want to make sure China is not doing competitive devaluations.” Nonetheless, Mnuchin also acknowledged that Chinese Yuan “depreciated significantly” due to “various factors”. He added “one of those factors has to do with their own economic issues and what has gone on in the Chinese economy.”

Earlier this week, Bloomberg reported that Mnuchin faced pressure from within the White House to formally designate China as currency manipulator. The Treasury Department is expected to release its semiannual currency report later this month. And we’ll see Mnuchin’s eventual stance then.

In our view, the 2015 Trade Act of the US has laid down three numerical criteria for currency manipulations. And China only satisfies one of the criteria, with huge bilateral trade surplus with US. We despise China for many of its economic and trade policies. While participation virtually in all international organizations since economic reform n 70s, China’s compliance to the rules of games has been declining as its economic status in the world grows. It is also notorious for tweaking the rules in its favor, despite detrimental to others. However, to us, it is equally a disgrace that the Trump administration accuses China of what it is not, for political gains. More in Who is a Currency Manipulator?

New York Fed President John Williams said in speech that recent FOMC statement well summarized the current US economy, with the word “strong” appeared five times. And Fed “has attained its dual mandate objectives of maximum employment and price stability about as well as it ever has.” He added that “most indicators point to a very strong labor market” while “inflation is right on target:”

He expected fiscal stimulus and favorable financial conditions to provide “tailwinds” to the economy for more strong growth. He expected real GDP to grow by 3.0% in 2018 and 2.5% in 2019. Unemployment rate is expected to edge down to slightly below 3.% next year. Price inflation is expected to move up a bit above 2%. But he added that “I don’t see any signs of greater inflationary pressures on the horizon.”

Regarding removal of “accommodative” language in latest FOMC statement, Williams said “these more concise statements do not signify a shift in our monetary policy approach.” And, they just “represent the natural evolution of the language describing the factors influencing our policy decisions “. And the changes in communications are signs that Fed is “nearing the end of the process of normalizing monetary policy”.

Sterling trades mildly lower after UK GDP miss. UK GDP was flat in August, grew 0.0% mom, below expectation of 0.1% mom. Though July’s figure was revised up from 0.3% mom to 0.4% mom. For the three months from June to August, GDP grew 0.7% from the  March to May quarter. All three main sectors contributed to GDP growth in the three months to August. Services grew 0.42%, production grew 0.10%, construction grew 0.17%.

Commenting on today’s GDP figures, Head of GDP Rob Kent-Smith said: “The economy continued to rebound strongly after a weak spring, with retail, food and drink production and housebuilding all performing particularly well during the hot summer months. However, long-term growth continues to lag behind its historical trend.”

UK Brexit Minister Dominic Raab told the parliament yesterday that the European Council meeting next week will be an ” important milestone” for Brexit negotiation. And he expected it to be “a moment where we will make some progress”. He added that ” negotiations were always bound to be tough in the final stretch”. But he remained “confident we will reach a deal this autumn.” His refrained comments suggested that he is targeting to complete the deal in November rather than October, as not enough progress was made. Raab also reiterated the Chequers proposal will deliver “frictionless trade with the EU that we have now”. But he urged the EU to “meet us half way”.

Separately, ITV reported that Prime Minister Theresa May’s chief negotiation Olly Robbins has made “meaningful progress” with EU Brexit negotiator Michel Barnier on Irish border issue. But no detail on the so called progress was revealed, nor the source. The Times reported that May is planning to have an extended discussion on Brexit at next Tuesday’s cabinet meeting to warp things up before the EU summit.

ECB Executive Board member Yves Mersch said in Singapore that the Eurozone economy is experience broad based expansion. And risks to growth remain “broadly balanced”. Overall, Mersch expect the expansion to continue as a “pace slightly above potential in the period ahead.” Inflation is expected to continue its rise thanks to “quite some” degree of monetary stimulus.

However, Mersch also warned that risks related to global factors, including “the threat of increased protectionism, the finalization of the Brexit negotiations and vulnerabilities in emerging markets are gaining prominence.”

Reuters reported, according to a document they obtained, German government slashed growth forecast for both 2018 and 2019 in the update to be released tomorrow. Growth is now projected to be at 1.8% in both 2018 and 2019, down from prior projections of 2.3% and 2.1% respectively. For 2020, growth is expected to be unchanged at 1.8%. Weak global trade, lowered state consumption and softer auto sector are the causes for slower than expected growth. 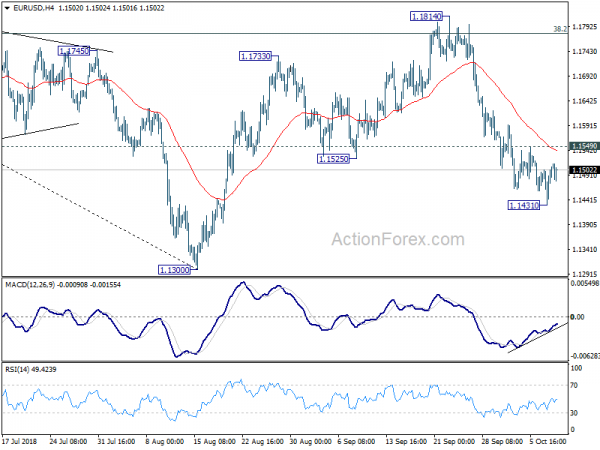 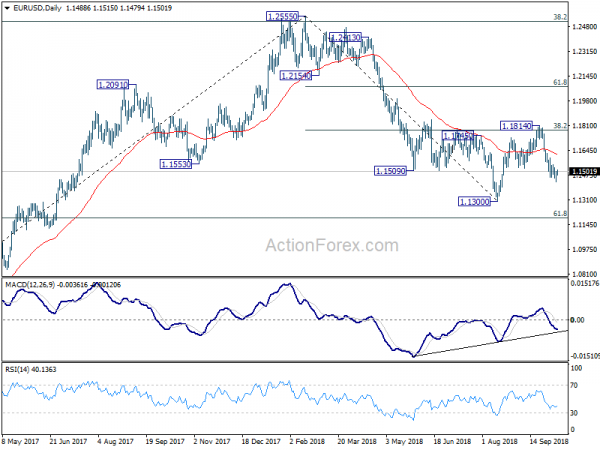