Sentiments Lifted as Italy Shows Budget Flexibility, But No Follow Through Buying in Euro

Euro, Sterling, Australian and New Zealand Dollar are so far the stronger ones today. Euro is lifted by news that Italy is finally showing some flexibility to adjust it’s 2019 budget deficit target. The development also send European stocks higher and Italian yield lower. Improvement in risk appetite helps lift Aussie and Kiwi slightly. Meanwhile, in such market sentiments, Yen, Dollar and Swiss Franc are naturally the softest ones.

Italy toned down on budget deficit target, open to adjustment

Euro is given a lift on reports that the Italian coalition is considering adjustment on its 2019 budget plan. It started with Il Messaggero newspaper quoting Armando Siri, a Transport Ministry undersecretary saying that “In order to save the budget and avoid an increase in market turbulence … a small fine-tuning (of the deficit target) could be considered.”

Then, it’s reported that Deputy Prime Minister, leader of Five-Star Movement, Luigi Di Maio also said deficit target reduction is not a problem as long as budget measures remain the same. He said in a radio interview that “what is important is that the budget contains the goals that we have established.” He referred to the measures including citizen’s income, and increase in retirement age. And, he added “then if the negotiation means that the deficit (target) must come down a bit, for us it’s not important.” Di Maio emphasized that “citizens are more important than numbers.”

The cabinet is expected to meet today in the evening to discuss reduction of the 2.4% deficit target of 2019. And that could open up the door for constructive dialogue with the European Commission to avoid Excessive Deficit Procedure.

Ifo President Clemens Fuest noted in the release that “Together with other indicators, these results point to 0.3 percent economic growth in the fourth quarter at most. The German economy is cooling down.”

EU publishes joint proposals with other members on WTO reforms

EU published the proposal of reform of the WTO’s Appellate Body today, for presentation on the General Council meeting on December 12. The proposal is a joint effort with other WTO members including Australia, Canada, China, Iceland, India, Korea, Mexico, New Zealand, Norway, Singapore and Switzerland.

EU Trade Commissioner Cecilia Malmström said in the press release that  “the appellate body function of the WTO dispute settlement system is moving towards a cliff’s edge. Without this core function of the WTO, the world would lose a system that has ensured stability in global trade for decades. Now, together with a broad coalition of WTO members, we are presenting our most concrete proposals yet for WTO reform. I hope that this will contribute to breaking the current deadlock, and that all WTO members will take responsibility equally, engaging in good faith in the reform process.”

UK PM May to address the Parliament on Brexit, call for support

UK Prime Minister Theresa May is expected to make a statement at around 1530 GMT in the parliament on completing the negotiation with the EU on withdrawal agreement and future relationship. May would also call the Commons to back the deal that allows UK to “move on”. Or, “this House can choose to reject this deal and go back to square one … It would open the door to more division and more uncertainty, with all the risks that will entail.”

The last step on the UK side is for the parliament to ratify the agreement. This remaining 1% is probably the most challenging task for the whole Brexit deal. The key date to remember now is January 21, 2019. There is a UK legal requirement that the government has to reach an agreement with the EU by then. If the parliament rejects the deal, the Government has until that day to put forward a new plan. The government is likely to use the brinkmanship strategy, threatening to leave the EU with no-deal on March 29, 2019, if the parliament rejects the current agreement.

More in Brexit Update – The Remaining 1%, The Most Challenging

Japan PMI manufacturing dropped to 51.8 in November, down from 52.9 and missed expectation of 53.0. That’s also a two-year low. Joe Hayes, Economist at IHS Markit, noted in the release that “October’s six-month peak seems to have been just a transitory month-to-month rebound”. And, “the underlying trend appears to be skewed to the downside.”. “Indeed, the fall in new orders is a worrying development as easing global growth momentum coupled with a weak domestic backdrop could spell further demand woes for Q4.”

BoJ Governor Haruhiko Kuroda appeared in the Parliament again today. He clarified that the objective of the quantitative and qualitative easing problem was to lift inflation to 2% target, rather than bankrolling the government debt.

He also pointed out “how to deal with the BOJ’s expanded balance sheet would be among key challenges for us when we were to exit from quantitative easing.” However, “past experience of other central banks indicate that with a good mix (of redemption and re-investment of bonds), it’s possible to shrink our balance sheet at an appropriate pace, while keeping markets stable.” 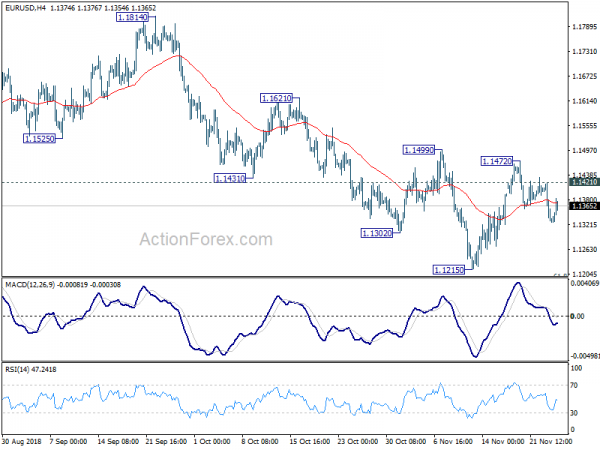 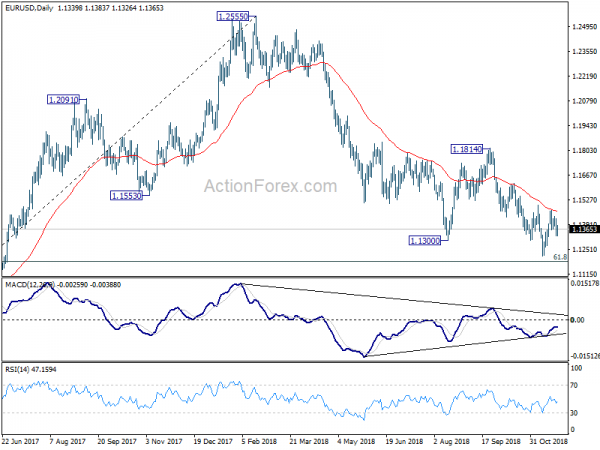