Yen strengthens broadly today as Asian stocks are weighed down by rather terrible Chinese trade balance data. Trade war with the US is hurting both exports and imports. But judging from the data alone, it’s unsure who suffered more. Nevertheless, the situation could change in the months ahead as China has already promised to buy more US goods. And the trade negotiations between the two sides progressed well. There are a lot to look forward to regarding Chines Vice Premier Liu He’s visit to Washington later in the month. For now, sentiments has turned a bit weaker.

Following Yen, Sterling is the second strongest one for today. The Pound is being supported by surging chance of a Brexit delay, or even no Brexit at all. Meanwhile, the chance of of no-deal Brexit is somewhat remote as the MPs look determine to prevent it from happening. Staying in the currency markets, Australian Dollar leader other commodity currencies lower. Dollar is mixed getting no special help from risk aversion.

China Dec trade balance: Massive -35.8% yoy fall in US imports; exports and imports contracted most since 2016

China posted a set of very disappointing trade data today. Exports and imports posted biggest contraction since 2016. More importantly, imports from the US dropped a massive -35.8% yoy in the month. But for the year, trade surplus with the US hit a record high.

For the year as a whole,

UK PM May: Blocking Brexit will be catastrophic and unforgivable breach of trust in our democracy

Ahead of the Brexit meaningful vote on Tuesday, UK Prime Minister Theresa May said in an articles in Sunday Express that blocking Brexit would be  a catastrophic and unforgivable breach of trust in our democracy”. And she urged the Parliament to “forget the games and do what is right for our country.”

May is also expected to warn in a speech today that “there are some in Westminster who would wish to delay or even stop Brexit and who will use every device available to them to do so”. And, based on the evidence she recent saw, it’s more likely for MPs to block Brexit than leaving EU with no deal. May will ask MPs to  “consider the consequences of their actions on the faith of the British people in our democracy”.

Separately, pro-EU Liberal Democrat leader Vince Cable said on Sunday that the parliament will act to stop no-deal Brexit from happening. Should May’s deal be voted down, Cable said MPs would bring forward legislation to revoke Article 50. He added “that is exactly what we should be doing because it would be absolutely outrageous and unforgivable if the chaotic circumstances of a no deal were allowed to happen.”

Labour leader Jeremy Corbyn told BBC TV that “my own view is that I would rather get a negotiated deal now, if we can, to stop the danger of a no-deal exit from the EU on the 29th of March which would be catastrophic for industry, catastrophic for trade.”

For the week, UK will undoubtedly be the major focus. Prime Minister Theresa May’s Brexit deal will very likely be voted down in the Parliament on Tuesday. May’s government is expected to lay out a “plan B” within days. A no-deal Brexit, for now, is unlikely as many MPs are joining forces to block it.

The question is, whether a general election or a second referendum would follow. We believe that a second referendum is more likely. But even so, it could be in a binary form, May’s deal or Remain. Or it could include no-deal Brexit as an option. In most cases, an extension of Article 50 looks inevitable. In addition, UK will also release CPI and retail sales.

US calendar will remain a bit light thanks to the record government shutdown for Trump’s border wall. PPI and Fed’s Beige book will catch some attention. Elsewhere, Canada CPI will be something that could move the markets.

EUR/JPY dips notably today and intraday bias stays neutral with focus back on 123.40 minor support. As noted before, we’d expect strong resistance around 124.61 to complete the rebound from 118.62 low. Larger decline is expected to resume afterwards. Break of 123.40 will affirm our view and turn bias back to the downside for retesting 118.62 low first. However, sustained break of 124.61 will extend the rebound to 127.09 resistance next. 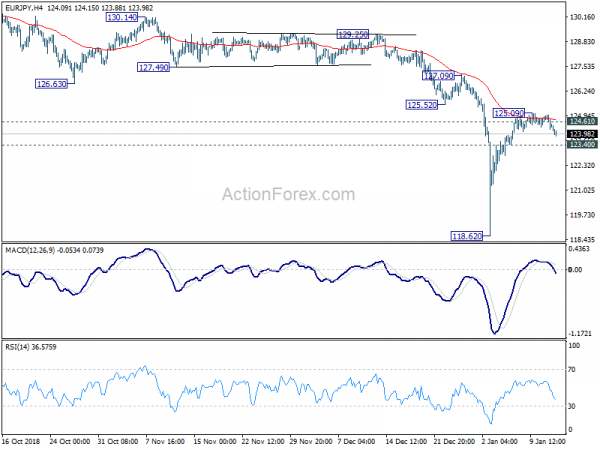 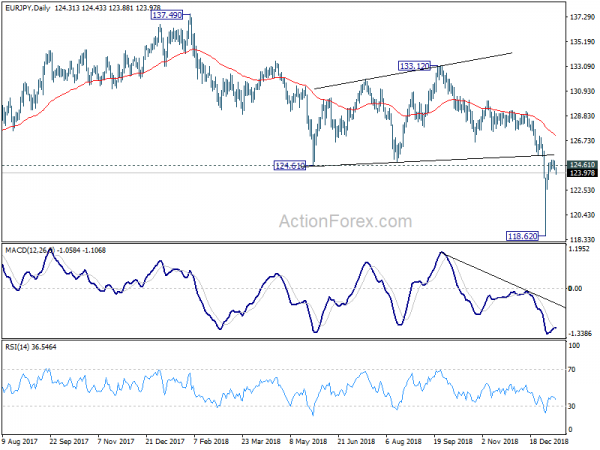