Renewed buying emerges in early US session for Sterling and it’s trading as the strongest for today so far. But for now, the Pound’s strength is relatively limited against Yen and Dollar. Investors would need to know more about the Brexit plan B before committing. Yen is supported by mild risk aversion today but it’s actually just staying in tight range. Dollar follows as the third strongest. On the other hand, New Zealand Dollar is the weakest one, followed by Canadian and then Swiss Franc.

Talking about the Franc, it weakest notably against Dollar, Euro and Sterling today. Technically, USD/CHF’s correction 1.0128 could have completed earlier than expected at 0.9716. Focus will be on 0.9963 for confirmation. For EUR/CHF, we continue to view the decline forum 1.1501 as completed at 1.1181. EUR/CHF’s rebound today put 1.1340/8 resistance zone into focus. Decisive break there will confirm our bullish view.

US initial jobless claims dropped to 213k vs expectation 218k

Philadelphia Fed Manufacturing Business Outlook rose notably to 17 in January, up from 9.4 and beat expectation of 10.1.

Looking at the details, the general activity and new orders indicators increased from their readings last month, while the indicators for shipments and employment decreased. The firms reported growth in the underlying demand for their products and are generally optimistic about future growth and employment.

Brexit: No article 50 extension request, plan B to be voted on Jan 29

UK Prime Minister Theresa May’s spokesman said that she has not raised the idea of extending Article 50 beyond March 29. And the spokesman also noted that “It is not something we have raised with the EU or suggested we wish to do”. On the other hand, European Commission spokesman  Margaritis Schinas also said “We have not received such a request from the UK for an extension”. And, “should there be a UK request to extend, this will be decided unanimously by the 27 and of course the request will have to set out the reasons for such an extension,”

After winning the confidence vote yesterday, May is expected to “table an amendable motion and to make a statement about the way forward” in the coming Monday.  The Conservative Party’s leader in the House of Commons Andrea Leadsom told the parliament today that “A full day’s debate on the motion will take place on Tuesday 29 January, subject to the agreement of the house.”

Regarding the possibility of a second referendum, opposition Labour leader Jeremy Corbyn said “If a second referendum takes place, then obviously the party will decide what role we will play in that … but I can’t really go along with the idea that it should simply be a re-run of what happened in 2016”. And, “there has to be a discussion about the options that we put forward.”

ECB Executive Board member Sabine Lautenschlaeger, a known hawk, said the central bank could still raise interest rate in 2019. She told Politico that “I’ll wait for the projections coming in March before I change my view”. She added “I’m data-driven in this, and I think that as we are still in the environment we projected.”

Also, pointing to recent dip in inflation, she said “It was clear that with the base effects of the energy prices, the inflation rate would drop”. However, “The core inflation rate didn’t dip that much.”

Japan Finance Minister Taro Aso urged G20 members to renew their commitment against protectionism. He noted in openings of G20 deputy financial leaders meeting that “dissatisfaction with economic inequality is growing. There is a serious risk that we will revert to a closed and fragmented world.”

And he warned that “Protectionism and unfair trade practices lead to instability and perverse economic outcomes. We must renew our commitment to international cooperation and openness.”

GBP/USD rebounds further today but it’s still limited below 1.2930 temporary top. Intraday bias remains neutral first. Overall, further rise is expected with 1.2668 minor support intact. On the upside, break of 1.2930 will extend the corrective rebound from 1.2391 to 1.3174 resistance, which is close to 38.2% retracement of 1.4376 to 1.2391 at 1.3149. We’d expect strong resistance from there to limit upside, at least on first attempt. On the downside, break of 1.2668 should now confirm completion of the rebound. In this case, intraday bias will be turned back to the downside for retesting 1.2391 low. 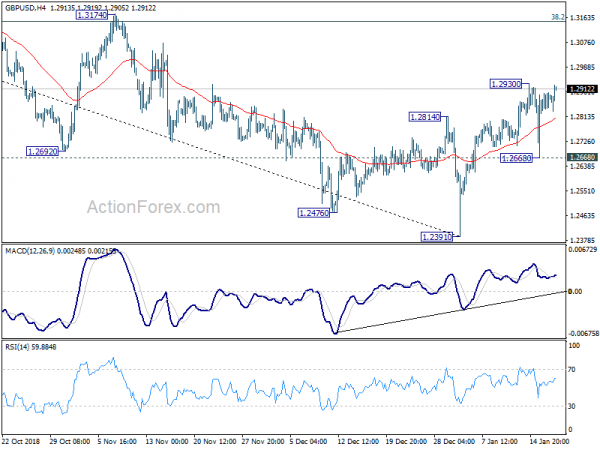 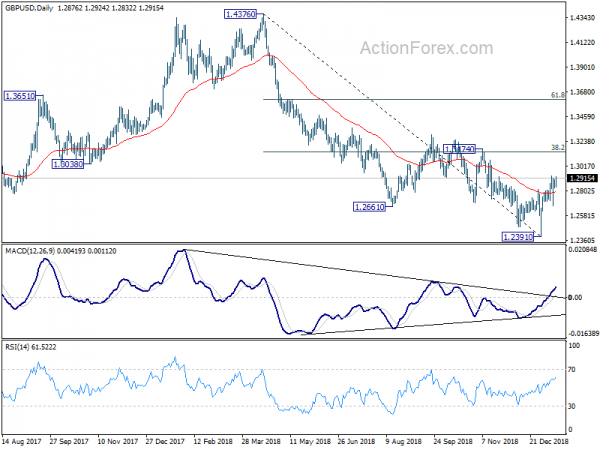