Dollar was sold off broadly overnight after Fed’s dovish FOMC statement. And it remains the weakest one for today. US equities also surged sharply and risk appetite was carried through to Asian session. Riding on this, commodity currencies are generally higher, as led by Australian Dollar. However Yen also remains resilient for now, as helped by deep decline in USD/JPY. Meanwhile, Sterling is the second weakest following Dollar on Brexit uncertainty. Swiss Franc is the third weakest.

Fed left federal funds rate unchanged at 2.25-2.50% as widely expected. The overall announce was rather dovish. In short, Fed dropped the tightening bias language of “”some further gradual increases” in interest rate. Instead, Fed said it would be “patient as it determines what future adjustments”. On balance sheet reduction plan, Fed is “prepared to adjust any of the details for completing balance sheet normalization in light of economic and financial developments”. But no detail was revealed yet. On economic assessment Fed stay activity has been “rising at a solid rate” rather than being “strong”. Also, “market- based measures of inflation compensation have moved lower in recent months”.

82% chance of Fed on hold through 2019, more yield curve inversion

Markets firmed up their pricing that fed will stand pat throughout 2019 after yesterday’s FOMC statement that adopted the “patience” language. Fed funds futures are pricing in 82.5% chance of federal funds rate staying at current 2.25-2.50% after December meeting. It compares to prior day’s 72.0%. Nevertheless, it’s not that higher than 79.3% a month ago.

BoJ released summary of opinions of January 22/23 monetary policy meeting today. It’s noted there that “hard data suggest that the trend in Japan’s economy has been firm”. However, “some market participants hold excessively pessimistic views.” And, risks to overseas economies have been “increasingly tilted to the downside” and there are concerns that some “may materialize”.

BoJ also noted that recent fall in stocks prices “to a certain extent indicates the anticipation of a global decline in the real economic growth rate.” And, “this is clear from developments in exports and imports, rather than GDP, which is declining marginally.”

The central bank also reiterated the stance to maintain current monetary easing. And more importantly, if downside risks materialize, BoJ “should be prepared to make policy responses”. It’s added that “Since achieving the price stability target has been delayed, it is not desirable to adopt a stance of not taking actions until a serious crisis occurs. Rather, a stance of taking swift, flexible, and decisive actions, including additional easing, in response to changes in the situation is desirable.”

China PMI manufacturing rose 0.1 to 49.5 in January, up from 49.4 and beat expectation of 49.3. It’s, nonetheless, the second month of contractionary reading. It’s noted in the release that the continuous decline since August last year was finally broken, showing signs of stabilization. Slight increase in export orders also suggested that sharp decline export growth since November was slowing down.

However, decline in new orders and backlog orders reflected downward pressure on demand. Overall, “the current economy has signs of stabilization, but the foundation still needs to be consolidated. Also from China PMI non-manufacturing rose to 54.7, up from 53.8, and beat expectation of 53.9.

Eurozone GDP will be the main focus in European session. Germany unemployment will also be featured. Later in the day, Canada GDP, IPPI and RMPI will be featured. US will release employment cost index, jobless claims, new home sales and Chicago PMI. 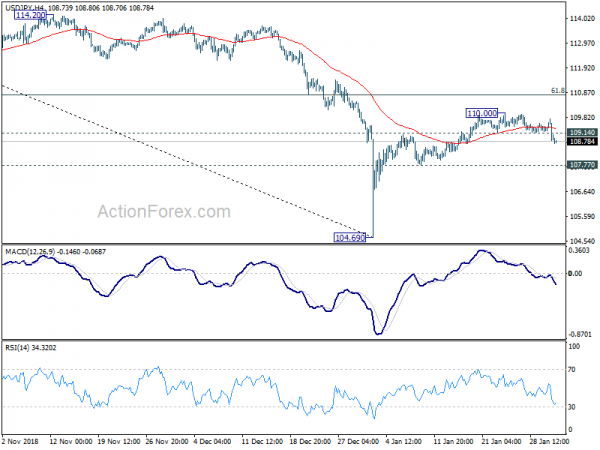 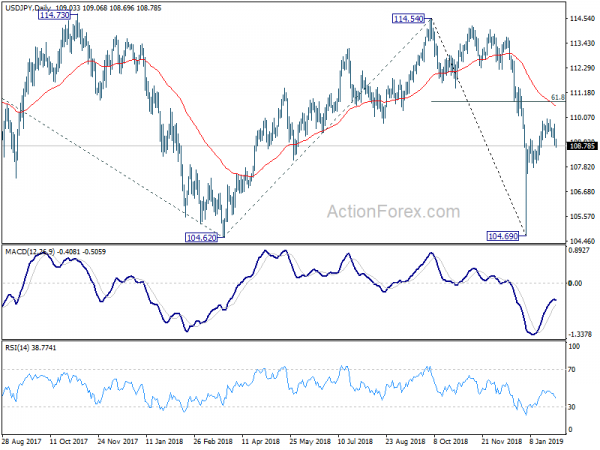