Dollar trades mixed in early US session after release of a batch of economic data. While Euro stays down for the day, it’s already pared back much of the earlier loss. At the time of writing, Canadian dollar is the weakest major currency today as WTI crude oil dips below 50 handle again. That’s followed closely by Euro and Dollar. Released in US, S&P Case-Shiller 20 cities house price rose 5.9% yoy in March. US Personal income rose 0.4% in April, spending rose 0.4%. PCE core slowed to 1.5% yoy. From Canada, current account deficit widened to CAD -14.1b in Q1. IPPI rose 0.6% mom in April, RMPI rose 1.6% mom in April.

Dallas Fed president Robert Kaplan said in an interview that growth in US is unlikely to take off and therefore "removal of accommodation should be done gradually and patiently". He pointed out growth in "labor force" and "productivity" as the two drivers of GDP. And Kaplan noted that the "problem is labor force growth is very sluggish" and it’s going to be that way in the "next 10 years". That’s because "population is aging labor force growth therefore is slowing". Nonetheless, he still expects two more rate hikes this year.

Regarding US President Donald Trump’s growth policies, Kaplan also offered his views. He noted that tax reform "could be helpful". But if it’s a "tax cut financed by increasing the deficit", he’s concerned that it "may give a short-term bump to GDP growth, but not a sustainable bump to GDP". And, "over the horizon we’ll have similar growth that we have now, except we’ll have more leverage, we’ll have higher debt to GDP and I think that will be negative for economic growth."

ECB to discuss hawkish change in forward guidance in June

Reuters reported that ECB policymakers will discuss in the upcoming meeting a hawkish change in the upcoming forward guidance. That is, ECB could drop the pledge to add to stimulus if needed. An unnamed governing council member was quoted saying that political risk is clearly down after French election and economic indicators were by and large positive. However, another source noted that the positive environment has been "relatively short" compared to the "long periods of crises". Hence, it’s not "responsible to base a major policy shift on such a short upswing".

While ECB may not make any move, not even in the language, it’s believed that the central bank should start to do something by latest September. This is with the consideration that the current asset purchase program will end in December. And one way or the other, ECB has to prepare the markets for any policy moves. Euro dipped sharply overnight on surging risks of an early Italian election. But the common currency recovers after the news report on ECB.

UK PM May: Brexit negotiation the "one, fundamental, defining issue" for the election

UK Prime Minister Theresa May emphasized today that Brexit negotiation is "the one, fundamental, defining issue" voters should consider casting their vote in the election on June 8. She noted that the Conservative has a plan for a "new deep and special partnership with the European Union that returns control to Britain". May is very clear on her tough stance on Brexit negotiations as she said before that "no deal is better than a bad deal", and, "we have to be prepared to walk out". UK’s Brexit Secretary David Davis warned that UK has to be "quite tough" with EU as Brussels won’t play fair. On the other hand, Labour leader Jeremy Corbyn set out a totally different approach and emphasized that "there’s going to be a deal" and "we will make sure there is a deal".

The negotiation is scheduled to start on June 19. Ahead of that, EU’s chief Brexit negotiator Michel Barnier urged the European MPs to be vigilant throughout the negotiation. Barnier wanted that once it leaves EU, UK could be "tempted to distance itself from our standards" like consumer projection or financial stability. And, he urged to ensure that this "inevitable divergence" won’t become "unfair competition". And he emphasized "full transparency for these negotiations". He reiterated his stance with EU leaders that "sufficient progress" is needed on the issues of the "divorce bill", citizens right and Ireland border arrangements before the talk of a trade deal.

Swiss KOF Economic Barometer dropped to 101.6 in May, down from 106.3 and missed expectation of 106.2. While the reading stood slightly above the long-term average, it did decrease substantially as compared to April. KOF noted that the decreased was due to negative contributions from manufacturing, export development, domestic consumption, financial and construction sectors. And inside manufacturing "the negative outlook was mainly visible in the paper, metal and electronic industries." 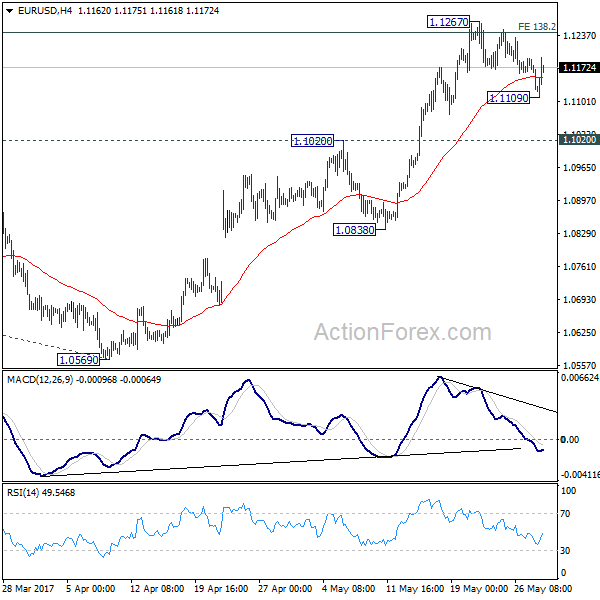 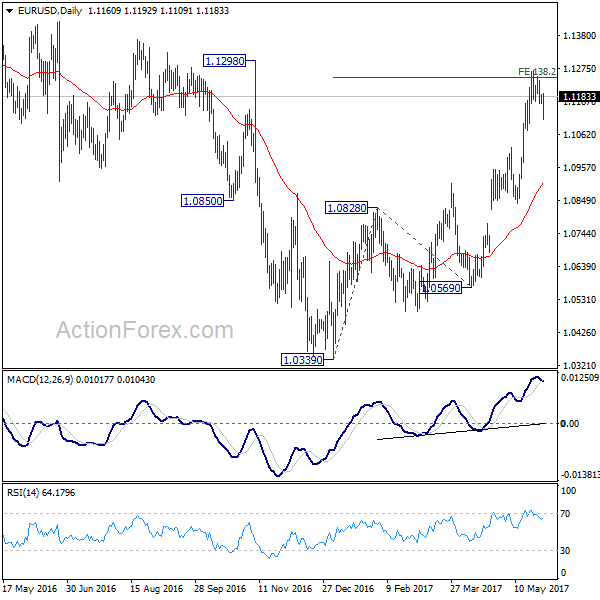