Sterling weakens mildly as a new poll indicates that Prime Minister Theresa May’s Conservative could fall short of an overall majority in the upcoming election on June 8. According to a new modelling by YouGov for the Times, it predicts that the Conservative would get 310 seat in the parliament, down from the prior 330 seat. On the other hand, Labour would get 257 seats, up from prior 229 seat. As the required majority is 326 seats, it now means that a hung parliament is a realistic possibility.

Technically, the British Pound is staying generally bearish. GBP/USD’s near term trend is likely reversed after hitting 1.3047 earlier in the month. And deeper fall is expected to test on 1.2614 support as long as 1.2926 minor resistance holds. Near term outlook in EUR/GBP also stays bullish with 0.8602 support intact. Upside momentum in EUR/GBP could accelerate on firm break of 0.8786/8851 resistance zone. More decline is in favor in GBP/JPY with 143.35 minor resistance intact, but we’d be cautious on support from 140.35 fibonacci level.

In US, Fed Governor Lael Brainard suggested that she expected a further Fed rate hike soon, but cautioned that "if the soft inflation data persist, that would be concerning and, ultimately, could lead me to reassess the appropriate path of policy". Separately, Dallas Fed President Robert Kaplan indicated at an interview that CNBC that the economy would expand by about 2%. According to Kaplan, "two things drive GDP: growth in the labor force and growth in productivity… The problem is labor force growth is very sluggish… It’s going to continue to be sluggish the next 10 years because the population is aging and labor force growth therefore is slowing".

Dollar index’s recovery from 96.97 is clearly corrective looking. It’s so far struggling to stay above 4 hour 55 EMA. It’s also limited well below 38.2% retracement of 99.88 to 96.75 at 97.97. Hence, we’d expect recent decline to resume sooner or later. The near term bearishness in dollar index is in line with the cautiously bullish outlook in EUR/USD and the bearish outlook in USD/JPY.

In China, the National Bureau of Statistics PMI manufacturing, the official one, was unchanged at 51.2 in May. While that stayed at the lowest level in six months, it was above expectation of 51.0. Looking at the details, new orders was unchanged at 52.3, export orders rose 0.1 to 50.7. Production dropped to 53.4, down from 53.8. Employment rose to 49.4 from 49.2. Input price dropped to 49.5 from 51.8. Output prices dropped to 47.6 from 48.7. The official PMI services rose to 54.5, up from 54.0. Overall, the set of data at least showed no further deterioration in growth momentum. Nonetheless, the picture will still be closely monitored by economists in the coming months. The impact from Moody’s downgrade of China’s credit ratings for the first time in nearly 30 years is yet to be seen.

New Zealand ANZ business confidence rose to 14.9 in May, up from 11.0. ANZ noted that "the economy’s excellent adventure continues". And, "firms are upbeat, and prepared to hire and invest. That’s an economic expansion that is still going full steam. Survey indicators are elevated but not stratospheric, consistent with the economy evolving into a mature stage of the expansion; we’re growing nicely off a good base, as opposed to lifting rapidly off a low level."

Eurozone CPI to highlight the day

EUR/GBP recovers after dipping to 0.8654 but it’s staying below 0.8750. Intraday bias remains neutral first and some more consolidations could be seen. But near term outlook will remain mildly bullish as long as 0.8602 support holds and further rally is expected. Above 0.8750 will target 0.8786 resistance first. Break of 0.8786 would pave the wave for retesting 0.9304 high. Break of 0.8602, however, will argue that the rebound from 0.9312 has completed and turn bias back to the downside for 0.8529 first. 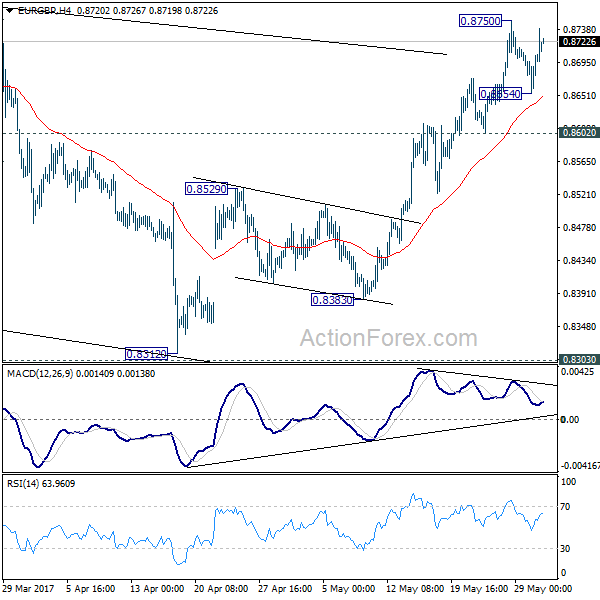 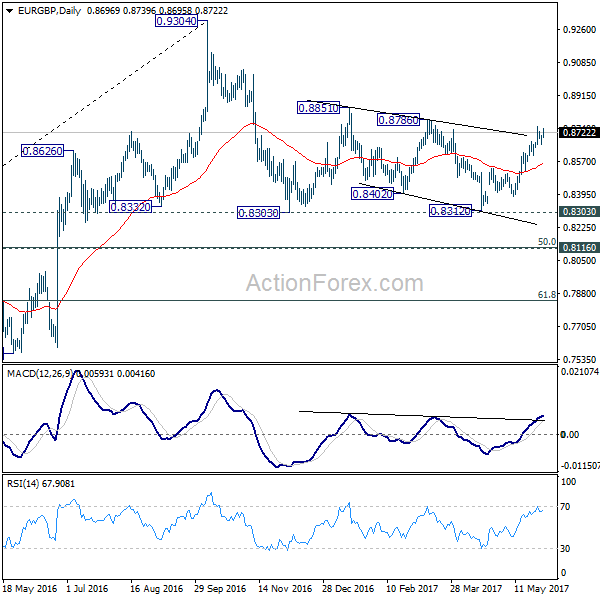