Euro dips broadly today as it’s reported that ECB would downgrade inflation forecast in the staff economic projections to be published tomorrow. Bloomberg quoted unnamed source noting that ECB staff forecasts inflation to be at 1.5% in 2017, 2018 and 2019. That’s quite notable downward revision from prior forecasts of 1.7%, 1.6% and 1.7% respectively. Weakness in energy price is seen as a major factor for the change. This will add to the case for policymakers to be have more patience regarding any stimulus exit. However, GDP forecast will be another thing that’s closely watched for any upward revision. Based on March staff projections, Eurozone economy will grow 1.8% in 2017, 1.7% in 2018 and 1.6% in 2019.

Also, ECB is widely expected to keep key interest rate at 0% and deposit rate at -0.4% tomorrow. The asset purchase program will be left unchanged, at EUR 60b per month. ECB officials have generally expressed the view that it won’t raise interest rate before ending the asset purchase in December. It’s still generally expected that, due to receding political risks, the central bank will end the asset purchase after that, and there could be an announcement of some sort in September. The main focus tomorrow is indeed on whether ECB would close the door for further stimulus by changing the language.

Technically, EUR/USD is staying well above 1.1109 near term support and thus, outlook remains bullish. 1.1298 is a key structure resistance to watch and firm break there will carry larger bullish implications. Meanwhile, EUR/GBP is also staying comfortably above 0.8654 support for the moment and maintains near term bullish outlook.

Sterling continues to trade mixed as markets await the highly uncertain election tomorrow. The latest Survation poll found that Prime Minister Theresa May’s Conservatives at 41.5% and Labour at 40.4%, just 1.1% apart. According to YouGov’s model, Conservatives could get just 304 seats in the Commons, down 26 from prior parliament. On the other hand, Labour could get 266 seats, up 37. That is, neither one will get the 323 seats required for absolute majority.

We’ll try not to predict the outcome of the election, which now becomes too hard to predict. But we do have anticipation on market reactions depending on the outcome. It should be noted again that Sterling surged sharply when May announced the snap election. Conservatives had over 20 pts lead over Labour back then. And the Pound started to struggle when Labour gained momentum recently. We’d expect to see such pattern continue as the vote counts are being released.

Australian dollar surges broadly today as GDP grew 0.3% qoq in Q1, meeting market expectations, even though it’s sharply slower than prior quarter’s 1.1% qoq. But after all, it’s the 103rd successive quarter, or 26 years, without recession. And it’s now a new world record of a country without a recession. Treasurer Scott Morrison said that "the results demonstrate the continued resilience of the Australian economy:" Some analysts noted that the slowdown in Q1 showed that the economy is "tired". But Morrison blamed the weather for the slowdown in Q1 and argued that improvements would be seen ahead. He noted that RBA Governor Philip Lowe reiterated yesterday that he expects the economy to grow above 3% in the next couple of years.

EUR/USD dips further today but it’s staying well above 1.1109 support. Intraday bias remains neutral for the moment. With 1.1109 intact, further rally is in favor. Decisive break of 1.1298 will carry larger bullish implication and target 1.1615 resistance next. However, break of 1.1109 will indicate short term topping and rejection from 1.1298. In that case, intraday bias will be turned back to the downside for 1.0838 support first. 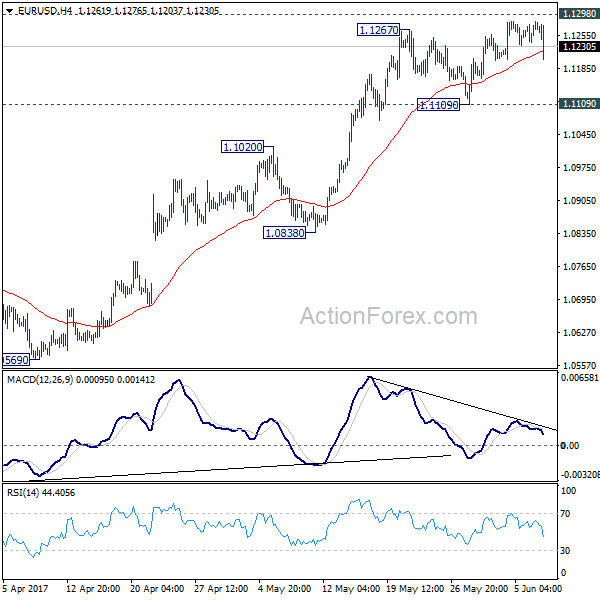 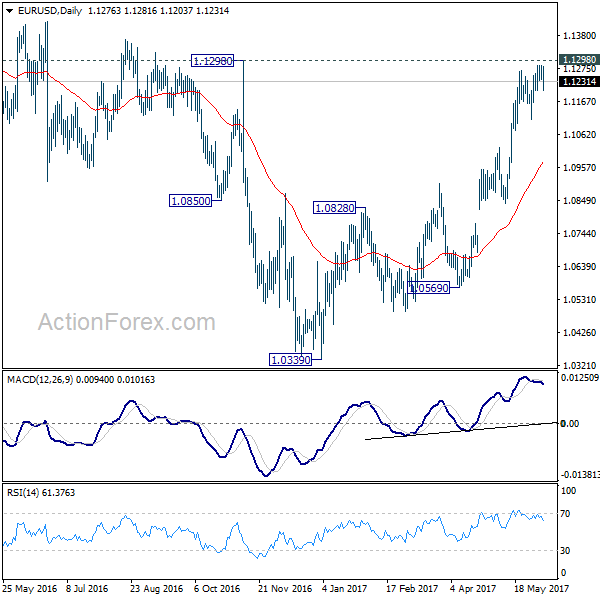