The financial markets are generally in consolidative mode, awaiting the start of the two-day G20 summit in Osaka, Japan tomorrow. For traders, main focus will be on face-to-face meeting of Trump and Chinese President Xi Jinping. Hopes are high for some form of agreement to stop further escalations in trade war. Words from both sides this week were not kind though. Trump threatened to do very substantial additional tariffs if talks break down again. China is insisting on its own principle and urged US to correct wrong practices.

In the forex markets, Yen is trading as the weakest one so far, followed by Euro. German CPI accelerated to 1.6% in June but that provides little help to the common currency. Dollar is not far away with Swiss Franc neither. On the other hand, Sterling is the strongest one for today but it’s going nowhere for now. Kiwi and Aussie are the next strongest.

The Trump-Xi meeting on sideline of G20 in Japan is confirmed to be held at 0230 GMT on Saturday. The South China Morning Post in Hong Kong reported that conditions on stopping further escalation in tariffs are already agreed upon. And the agreement will be laid out after the meeting in form of coordinated press releases, rather than joint statement.

Public comments regarding 25% tariffs on USD 300B of Chinese imports, essentially all untaxed, would end on July 2. Trump could formally make a decision to start imposing the tariffs very soon, should trade negotiations collapse once again. Trump also made himself very clear yesterday and said “I would do additional tariffs, very substantial additional tariffs, if that doesn’t work, if we don’t make a deal.”

China insists on core concerns in US trade talks

Ahead of the Xi-Trump meeting in Japan on Saturday, Chinese reiterated their hard-line stance. Ministry of Commerce spokesman Gao Feng warned that “China’s core concerns must be addressed properly” in trade negotiations. He added, “we hope the U.S. side could drop its wrong practices, and we can solve the problems through equal dialogue and cooperation.” Gao also urged US to ” cancel immediately sanctions on Chinese companies including Huawei to push for the healthy and stable development in Sino-U.S. ties”.

Separately, Foreign Ministry spokesman Geng Shuang said “the Chinese people are not afraid of pressure and never buy this kind of strategy,” referring to Trump’s tariff threats. And, he warned “starting a trade war and adding tariffs harms itself and others.”

On the other hand, WSJ reported that Xi will insist on lifting Huawei ban as part of a set of terms before China would come back to the table. Xi could also request US to lift all punitive tariffs and drop efforts to get China to buy even more US exports than Xi said it would back in December.

Business Climate Indicator dropped -0.13 to 0.17, below expectation of 0.28. Managers’ production expectations, as well as their views on overall and export order books and the level of stocks deteriorated. Only the assessments of past production improved.

Germany CPI accelerated to 1.6% yoy in June, above expectation of 1.4% yoy.

ANZ noted: “The outlook for the economy is murky. As things stand, there is no reason for the economy to fall into a deep hole. Commodity prices are good, interest rates are at record lows, and the labour market is tight. But the economy is facing credit and cost headwinds and the global outlook is deteriorating. On the latter, for all that our commodity prices have been resilient, the risks are looking decidedly one-sided. Upside risks to growth appear few and far between and with the inflation outlook not consistent with the target midpoint we expect two more OCR cuts this year.” 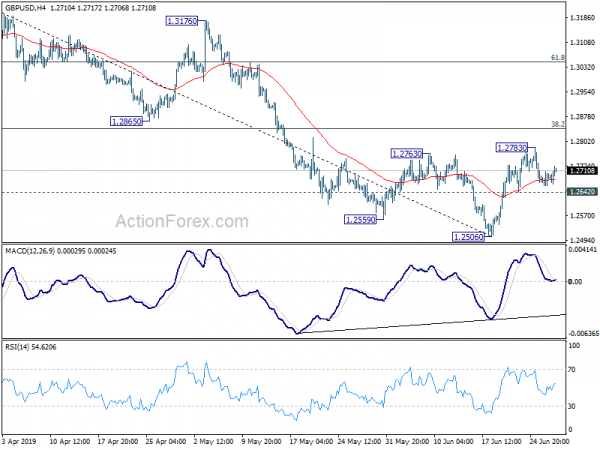 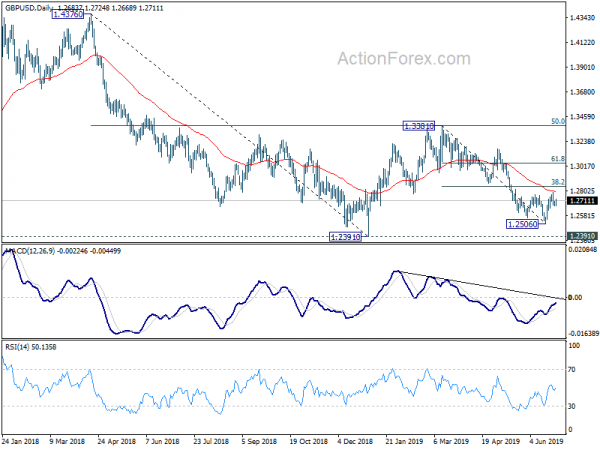