Technically, though, trading is rather subdued as most pairs and crosses are bounded in tight range. For now, further rise is mildly in Dollar in general, except versus Canadian. USD/CAD’s recovery failed 1.3145 minor resistance and is eyeing 1.3037 low again. With resilience in commodity currencies, EUR/AUD is looking at 1.6025 temporary low for resuming recent fall from 1.6448. EUR/CAD’s decline is on track for medium term projection level at 100% projection of 1.6151 to 1.4759 from 1.5645 at 1.4253.

Sentix noted that after the supposed de-escalation signals in US-China trade war at G20, there was “great hope that the downward trend in the economy could be stopped”. But, investors are “not blinded by the rising share prices” as expectations show no upward reaction to the news. It warned, “without resilient negotiation results, it will be difficult for investors worldwide to develop a different perspective.”

Sentix said “things are even worse for the German economy”. “The high dependence on exports and the Chinese sales market is increasingly becoming a burden and the customs dispute hovers like a sword of Damocles over the former model boy of the Euro region.” Also, the automotive industry is “simply not emerging from the crisis”.

BoJ: All nine regions expanding or recovering, but uncertainties heightened

In the quarterly Regional Economic Report, BoJ kept assessment of all nine regions unchanged. All nine regions reported that their economy had been “either expanding or recovering”. Domestic demand had “continued on an uptrend”, with a virtuous cycle from income to spending operating in both the corporate and household sectors. But, exports and production had been affected by the “slowdown in overseas economies”.

Also, while the assessments were overall unchanged, “a somewhat increasing number of firms were pointing to heightening uncertainties over the outlook for overseas economies and their impacts, reflecting, for example, the U.S.-China trade friction.”

Governor Haruhiko Kuroda told the central bank’s regional branch managers that inflation is still expected to pick up gradually to 2% target. The economy is expected to continue expanding moderately as a trend, even though it’s affected by overseas slowdown. But still, BoJ would maintain easing for as long as needed to hit stable target.

Kuroda reiterated that short- and long-term interest rate will be kept at current very low levels for extended period, “at least through around spring 2020”. Also, monetary base will continue to expand, and QQE will be maintained under the yield curve control framework. Also, Kuroda pledged that “the BOJ will make necessary policy adjustments to sustain the economy’s momentum towards achieving its inflation target.”

No change in EUR/USD’s outlook and intraday bias remains on the downside for the moment. Corrective recovery from 1.1107 should have completed way earlier than expected at 1.1412. Firm break of 1.1181 support will confirm this bearish case and target retest of 1.1107 low. On the upside, above 1.1287 minor resistance will turn intraday bias back to the upside for 1.1412 instead. 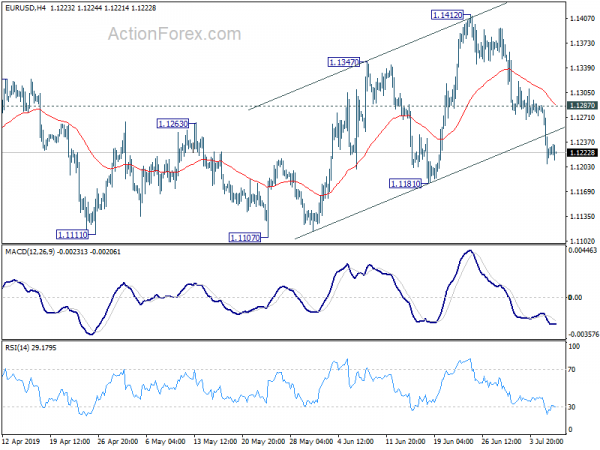 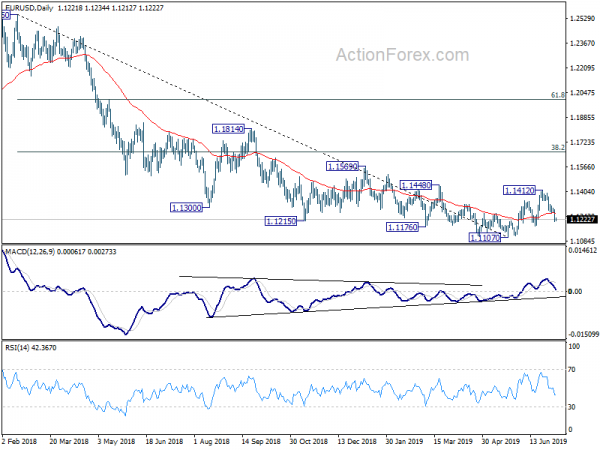