Now, after Fed Chair Jerome Powell’s testimony, a July Fed cut is more like a done deal than not. Dollar tumbled broadly overnight and selloff continues today. Euro is the second weakest as ECB will likely be a step ahead of Fed to announce additional stimulus this month. June’s monetary policy accounts to be released today would confirm such expectations. Sterling is currently the third weakest.

Asian stock markets are generally boosted by the expectations of Fed cut. Yet, Yen responds to fall treasury yields instead and surge across the board. Following Yen, New Zealand Dollar is currently the second strongest for today, followed by Swiss Franc. Canadian and Australian Dollars are mixed for the moment.

Technically, Dollar should have topped in near term against Euro, Sterling and Australian Dollar. More importantly, USD/JPY recent rebound from 106.78 should have completed at 108.99 and retest of 106.78 low might be seen rather soon. A major focus now will be on 1.3037 support in USD/CAD. Sustained break there will carry larger bearish implications.

Dollar’s selloff extends in Asian session today, riding on the view of Fed’s rate cut in July is a done deal. Fed Chair Jerome Powell’s testimony to Congress was not decidedly dovish. But he did nothing that toned down market’s full pricing of July cut. Instead, he pointed to the continuous uncertainties from trade tension and global slowdown. It seems now that continuation of uncertainties is already enough for an insurance rate, rather than manifested deterioration in outlook.

The tone was somewhat echoed by June FOMC minutes too. The minutes indicated that Fed’s monetary stance has moved to “risk management” with “several” of them believing a rate cut should be implemented to “cushion the effects of possible future adverse shocks”. Additionally, the minutes acknowledged that current financial conditions are “premised importantly on expectations that the Federal Reserve would ease policy in the near term to help offset the drag on economic growth stemming from uncertainties about the global outlook and other downside risks”.

BOC left the policy rate unchanged at 1.75% yesterday and maintained a neutral tone. Policymakers turned more cautious about the impact of trade tensions on economic activities and noted that global interest rates have been lower over the past months. Yet, they acknowledged that domestic growth remained upbeat.

While raising the GDP growth forecast for this year, the members downgraded the forecast for 2020. Despite higher growth expectations, inflation outlook for this year was taken slightly lower. Yet, it remains within the central bank’s target. While BOC would be closely monitoring developments of trade tensions, current economic developments suggest that it can maintain the monetary policy unchanged for the rest of the year.

German Altmaier open to drop subsides on Airbus, if US does so with Boeing

German Economy Minister Peter Altmaier is set to meet US Trade Representative Robert Lighthizer to discussion resolution to the Boeing-Airbus dispute. He would be open to eliminating all government subsidies to Airbus, on condition that US would do the same to Boeing.

He said, “I could perfectly go along with … we will no longer provide any subsidies on both sides. Then it is just competition and nothing else.” He added, “it is in the interest of both sides to avoid these tit-for-tit tariffs”, referring to the tariffs between US and EU on the issue.

Altmaier also had a “productive and constructive” meeting with US Treasury Secretary Steven Mnuchin. He noted that “We are in the middle of intensive discussions. For me, the Americans remain partners and friends despite our disagreements.”

Japan tertiary industry index dropped -0.2% mom in May, below expectation of -0.1% mom. Australia home loans was flat in May, better than expectation of -1.0% mom. Consumer inflation expectations rose slowed to 3.2% in July. UK RICS house price balance improved to -1 in Jun.

USD/JPY’s sharp fall suggests that rebound from 106.78 has completed at 108.99 after failing to sustain above 108.80 resistance. The corrective three wave structure and rejection by 55 day EMA indicates that near term bearishness remains. Intraday bias is turned back to the downside for 107.53 support first. Break will likely send USD/JPY through 106.78 to resume the decline from 112.40. For now, near term outlook will remain bearish as long as 108.99 resistance holds. 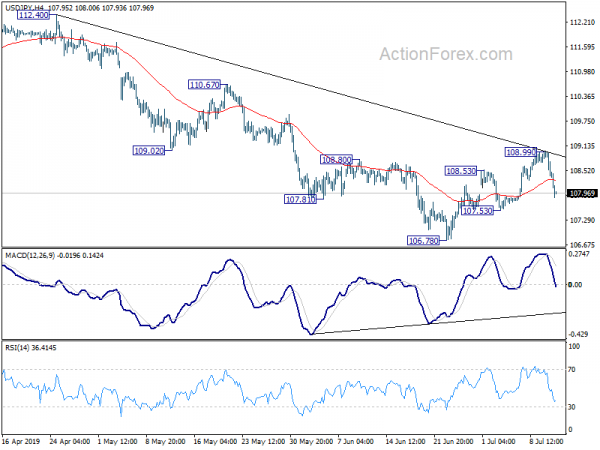 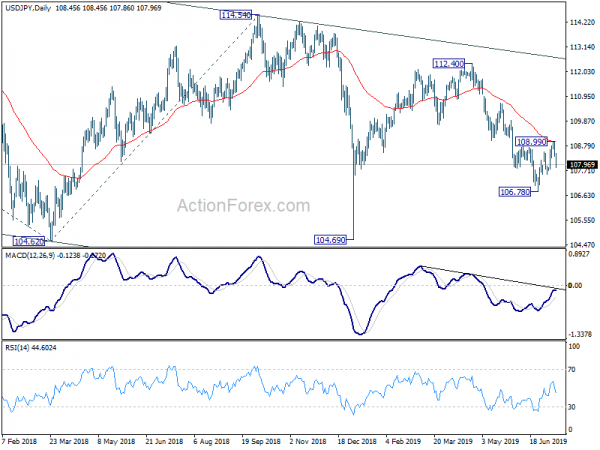