Dollar weakens generally again today as remains the worst performing one for the week, on expectation of July Fed cut. Fed Chair Jerome Powell also indicated that the decision could be based more on continuing uncertainties, rather than deterioration of outlook. New York Fed John Williams also hinted he might not want to upset the expectations, which has been helping consumer and business spending already. With the exception of Atlantic Fed Raphael Bostic, other Fed speakers so far seemed to be supportive of a cut.

Staying in the currency markets, Sterling is currently the second weakest for the day, followed by Yen. Commodity currencies are the strongest ones on risk appetite, led by Australian. Technically, USD/CAD seems to finally breaking through 1.3052/68 cluster support firmly. Such development should confirm medium term bearish reversal and could drag the pair to next support at 1.2781 first.

Fed chair Jerome Powell’s day two of testimony offered little new. He noted that Fed has room to ease policy. And, as the neutral rate is lower than policymakers thought, policy hasn’t been as accommodative as they thought too.

He said “if anything, relative to earlier in the year, the conditions, the arguments for adding policy accommodation have strengthened over time, and I think that’s the way I continue to view it.” And, “the markets expect cuts so therefore you see lower mortgage rates, you see lower interest rates, and stronger financial conditions broadly, and I think that contributes to more consumer spending and business spending.”

On the economy, he said it’s in a “good place” but appears now to be “growing at a more moderate pace” than last year”. He pointed to the uncertainties, “especially related to trade and global growth”. And, “we have issues around inflation expectations being soft, obviously inflation continuing to run below 2%.”

Fed Bostic: Storm clouds not generating a storm yet

Atlanta Fed President Raphael Bostic said he would to to July’s FOMC meeting with an open mind. But, “I do feel that with respect to both objectives of our dual mandate, we are in a good position,” suggesting he’s not backing a rate cut for now.

Bostic noted expectations regarding the economic outlook “are remaining pretty stable”. And, “I am not seeing the storm clouds actually generate a storm yet.” he has been talking business people in the last couple week. He noted, “they are not leaning back…They are not cutting jobs, They are not cutting investments that have already been underway. While “they are cautious… they haven’t stopped… they’ve just slowed”.

On inflation, he said “the best measures suggest it is close to target and not materially trending away from it.”

Fed Governor Lael Brainard said the economic outlook is “solid” as supported by consumer spending. However, business spending has been “lackluster” with soft sentiment. And, lower inflation expectations could be entrenched if Fed allows inflation to run below target for too long. And, that would make it even hard for Fed to cushion the next downturn.

She expressed her support for a rate cut as “taking into account the downside risks at a time when inflation is on the soft side would argue for softening the expected path of monetary policy according to basic principles of risk management.”

Though, she added, “of course, my judgment about the actual path of policy will continue to be influenced by the evolution of the data and the risks.”

Trump blasted Bitcoin and other Crytpocurrencies as they are “not money” with value “highly volatile and based on thin air”. He criticized that “unregulated crypto assets can facilitate unlawful behavior, including drug trade and other illegal activity”. Also, Facebook’s Libra “will have little standing or dependability”.

He then hailed the only “real currency” the United States Dollar. He said the USD is “stronger than ever, both dependable and reliable”, the “most dominate currency anywhere in the World”.

New Zealand BusinessNZ Performance of Manufacturing Index rose to 51.3 in June, up from 50.4. BusinessNZ’s executive director for manufacturing Catherine Beard said that while the sector avoided further deterioration in activity from May, there were still a number of concerns about manufacturing’s current state of play.

She said: “The key sub-indexes of production (51.0) and new orders (52.8) recovered from May, which ensured the sector didn’t fall into contraction for June. However, employment (48.0) worsened to its lowest level since August 2016, while deliveries of raw materials (48.9) also fell into negative territory for the first time since December 2017, and its lowest result since September 2012.

The economic calendar is rather light today. Eurozone industrial production and US PPI will be featured.

USD/CAD’s decline resumed by breaking 1.3037 and reaches as low as 1.3022 so far. Intraday bias is back on the downside. Sustained trading below 1.3052/68 cluster support will carry larger bearish implication, and bring further fall to 1.2781 support next. On the upside, break of 1.3143 resistance is needed to indicate short term bottoming. Otherwise, near term outlook will remain bearish in case of recovery. 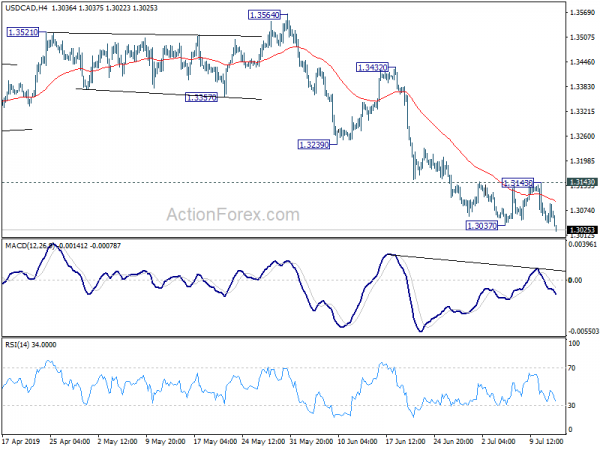 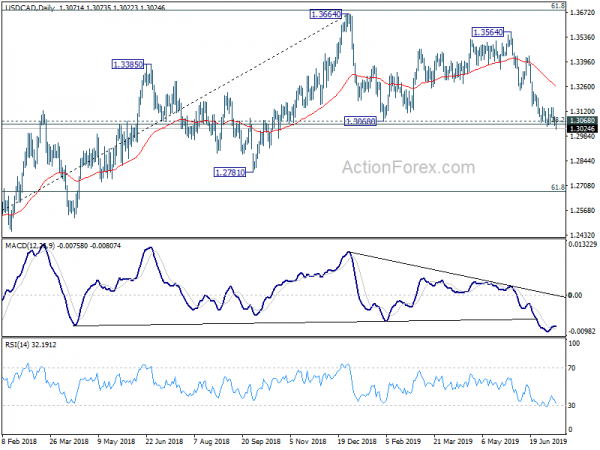