Yen and Swiss Franc extends last week’s strong rally as risk aversion dominates Asian markets. A key trigger is the free fall in the Chinese Yuan, which dives through psychologically important 7 level against Dollar, in response to trade war escalations. Major Asian indices are all in deep red while treasury yields also tumble. In the currency markets, Australian Dollar is the second weakest, followed by New Zealand and then Canadian. Dollar is mixed for now.

technically, downside momentum in Yen crosses is generally strong. USD/JPY breaches 105.83 projection level and is on track to retest 104.69 low. EUR/JPY also breaks 118.07 projection and is on track to 114.84 low. Similarly, though a bit far, GBP/JPY is on track to 122.36 low. EUR/GBP could be a focus today as buying picks up momentum. Focus is on 0.9190 temporary top and break will resume recent rally.

Chinese Yuan dropped sharply in Asian session partly in response to trade war escalation with US. The PBoC set its daily reference rate at just a slightly weaker level than 6.9 for the first time since December. By USD/CNH (offshore Yuan) then surged to a new low at 7.111, break through the psychological level of 7 decisively. In the stock markets, Nikkei is currently down -2.30%. Hong Kong HSI down -2.89%. China Shanghai SSE down -0.81%. Singapore Strait Times down -1.83%.

Last week, Trump announced to impose 10% tariffs on USD 300B of effectively all untaxed Chinese imports, starting September 1. China responded with hard-line rhetorics. Also, Bloomberg reported that the government has asked its state-owned enterprises to suspend imports of US agricultural products. The developments suggested a return to ti-for-tax retaliations and suspension of trade talks.

Meanwhile, today’s free fall in Yuan argues firstly that the Chinese government is seeing no need to keep Yuan exchange rate stable. Further, it’s a sign that Beijing is weaponizing the Yuan as a tool to offset the impact of tariffs in trade war.

Dr. Zhengsheng Zhong, Director of Macroeconomic Analysis at CEBM Group said: “In general, China’s economy showed signs of recovery in July, thanks to large-scale tax and fee cuts, as well as ongoing support from monetary policy and government-driven infrastructure investment. It remains to be seen if the economic recovery can continue amid trade fictions with the U.S. and rigid regulations on the financial sector and debt levels. The recovery in July suggests that China’s economic slowdown is under control.”

Australia AiG Performance of Services dropped sharply to 43.9 in July, down from 52.2. The -8.3 pts fall is the largest monthly decline since July 2018. Reading below 50 signaled a return to contraction, as trading conditions for many businesses dived again.

Looking at some details, among the business-oriented sectors, only wholesale trade reported positive results. Among the consumer-oriented segments, the large ‘health, education & community services’ sector was strongest. The retail trade sector continued to perform very weakly.

The week ahead: RBNZ to cut, RBA to hold

Two central banks will meet this week. RBNZ is generally expected to cut OCR by -25bps to 1.25%. RBA, on the other hand, is expected to stand pat after two back-to-back rate cuts in June and July. Both central banks are expected to ease monetary policies further in the latter part of the year. Thus, their statements and economic outlook will be watched to affirm such expectations. In addition, BoJ will release summary of opinions while ECB will release monthly economic bulletin.

On the data front, US ISM services; UK PMI services, GDP and productions; Canada employment; New Zealand employment; Australia trade balance; China trade balance will be closely watched. But the tone of the markets are already set, global slowdown, trade war escalation and increasing risks of no-deal Brexit. Those data are unlikely to turn around bearish sentiments. Instead, downside surprises in the data could trigger more bearish sentiments towards respective currency.

Some highlights for the week again. 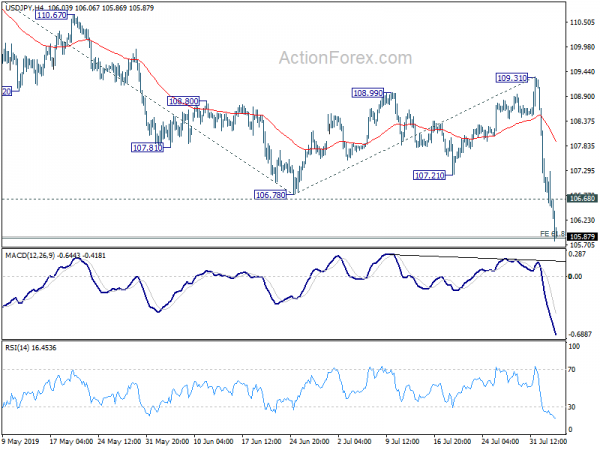 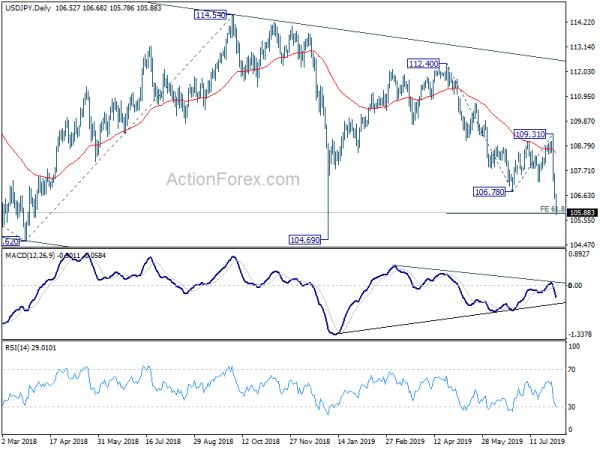