Euro drops broadly after ECB finally delivers and announced a package of stimulus. The cut in deposit rate and size of QE are somewhat smaller than expected. But the new economic projections remain decidedly dovish despite the easing package. At this point, Sterling is following closely as the second weakest and then Canadian. Dollar firm up mildly after stronger than expected core CPI reading. Yet, it’s, for now, still overwhelmed slightly by Yen, as treasury yields reverse this week’s gains.

Technically, despite today’s fall, EUR/USD has yet to break 1.0926 support. This will remain the focus for the rest of the session. Firm break will resume larger down trend to 1.0813 fibonacci level next. EUR/GBP breaches 0.8891 key cluster support briefly but fails to sustain so far. Firm break there will dampen our original bullish view and bring deeper fall to 0.8797 fibonacci level and below. EUR/JPY also breaches 117.73 minor support, without follow through selling. Firm break will indicate completion of rebound from 115.86 and bring retest of this low.

ECB announced to cut deposit facility rate by -10bps to -0.50%. Main refinancing rate and marginal lending facility rate are kept unchanged at 0.00% and 0.25% respectively. A two-tier system for reserve remuneration  will also be introduced, with part of banks’ holdings of excess liquidity exempted from negative deposit rate.

Forward guidance is also changed to “The Governing Council now expects the key ECB interest rates to remain at their present or lower levels until it has seen the inflation outlook robustly converge to a level sufficiently close to, but below, 2% within its projection horizon, and such convergence has been consistently reflected in underlying inflation dynamics.”

ECB will also restart asset purchase program at EUR 20B per month, starting November 1, without any specified end date.

ECB revised down growth in inflation projections after easing

Eurozone’s slowdown in growth mainly reflects “prevailing weakness of international trade in an environment of prolonged global uncertainties which are particularly affecting the euro area manufacturing sector.” But services and construction show “ongoing resilience. Risk to growth “remain tilted to the downside” due to “prolonged presence of uncertainties, related to geopolitical factors, the rising threat of protectionism and vulnerabilities in emerging markets.”

Ifo noted: “This downturn was triggered by a series of world political events calling into question a global economic order that had evolved over decades and required adjustments to established international value chains. As a result, economic uncertainty worldwide rose to historic highs and the international economy cooled off increasing”.

“Meanwhile, world trade and world industrial production are declining. In addition, automobile manufacturers in particular are facing an abrupt technology shift, which in some cases brings with it enormous adaptation requirements.”

EUR/USD drops sharply today but stays above 1.0926 support. Intraday bias remains neutral first. Consolidation from 1.0926 could extend with another recovery. But upside is expected to be limited below 1.1164 resistance to bring fall resumption. On the downside, break of 1.0926 will resume lager down trend from 1.2555 for 1.0813 fibonacci level next. 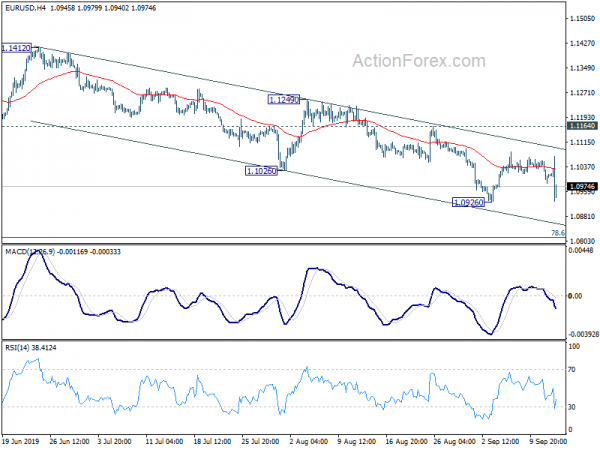 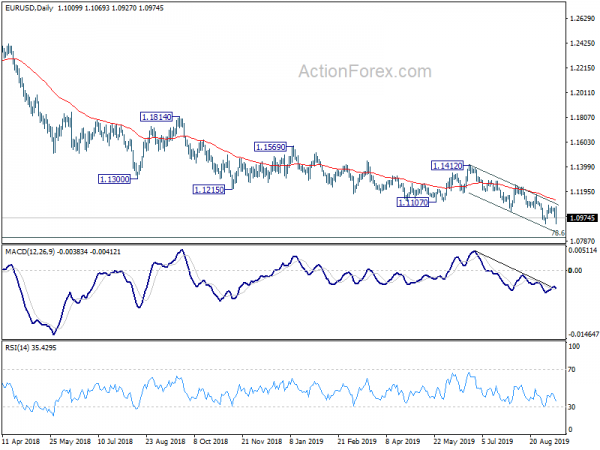