The forex markets are generally quiet today, staying in tight ranges. Trading is subdued with China and Hong Kong on holiday. Yen, Euro and Dollar are the mildly firmer ones. Australian Dollar, Sterling and Swiss Franc are the relatively weaker ones. US-China trade talks and Brexit will be the focuses this week. And we’d see more volatility in related currencies as news come in.

Technically, Australian Dollar appears to be weakening broadly. EUR/AUD’s retreat and AUD/USD’s recover clearly lost momentum as see in 4 hour charts. We might see retest of 1.6368 temporary top in EUR/AUD and 0.6670 temporary low in AUD/USD ahead is selloff in Aussie worsens. USD/JPY will be a pair to watch in relation to overall sentiments. As long as 107.29 minor resistance holds, further decline is in favor to retest 104.45 low.

Chinese Vice Premier Liu He is expected lead his delegation to Washington for next round of high-level trade talks with US starting this Thursday. But it’s reported that the scope of discussions have narrowed considerably recently. And China is increasingly reluctant to agree to a full trade deal as US President Donald Trump insists on.

Liu indicated that the offer to the US would not include measures that address the core issues, including intellectual property theft, forced technology transfer and subsidies on state-owned enterprises. That could be a result of interpretation of Trump’s impeachment inquiries as a sign of weakening in negotiation position.

Kansas City Fed President Esther George said over the week end that “the U.S. economy is currently in a good place, with low inflation, low unemployment and an outlook for continued moderate growth.” And, “in current circumstances, concern about low inflation seems unnecessary.”

She added, it’s more “realistic to accept that there will be both temporary and persistent fluctuations around” Fed’s 2% inflation target. And, “as long as they don’t exceed a reasonable threshold — perhaps as big as 50 or even 100 basis points — they should be tolerated, depending on broader economic conditions”.

“Should incoming data point to a broadly weaker economy, adjusting policy may be appropriate to achieve the Federal Reserve’s mandates for maximum sustainable employment and stable prices,” George said. But “trying to quickly return inflation to 2 percent by adjusting interest rates could require aggressive actions that would misallocate resources and create financial imbalances.”

Australia AiG Performance of Construction Index dropped to 42.6 in September, down from 44.6. The construction industry was on aggregate declined more sharply. Contraction continued for 13th consecutive months with industry activity and new orders falling further into negative territory.

Looking ahead: Fed and ECB to release meeting minutes

Looking ahead, US-China trade negotiations and Brexit developments would be most market moving. Additionally, both minutes of Fed and ECB would be scrutinized for hints on further policy easing. Data to be watched include US CPI, Canada employment, UK GDP and productions. 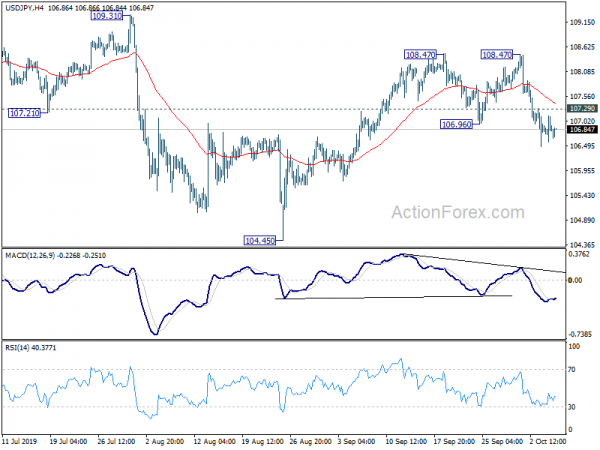 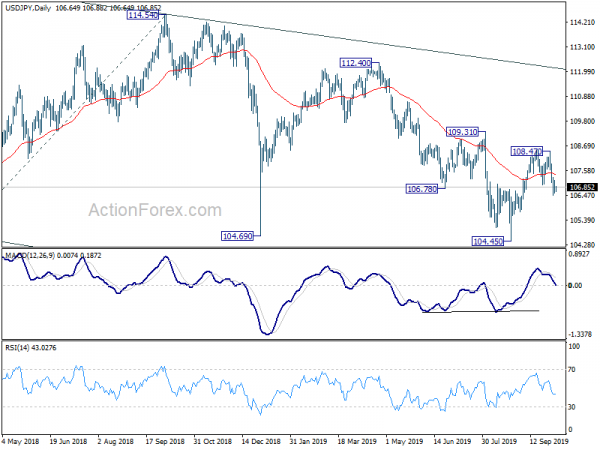