Canadian Dollar rises slightly higher after Prime Minister Justin Trudeau cling on to power following election wing. His Liberal Party had won, or were leading in 155 out of 338 seats in the parliament. That was short of the 170 seats needed to take majority and the Liberal might need support from others to push through key legislations. Yet, the results should bring some political stability for now.

Staying in the currency markets, New Zealand Dollar is currently the strongest one, followed by Sterling. The Pound will look into the Second Reading vote of the new Brexit deal. This will be the moment of truth for Prime Minister Boris Johnson and Sterling. At this point, Swiss Franc is the weakest for today, followed by Dollar.

Technically, USD/CAD is on track to retest 1.3016 low as current decline from 1.3382 is extending. CAD/JPY is looking at 83.23 resistance to confirm completion of recent correct pull back from 85.23. NZD/JPY’s break of 69.68 resistance today confirms resumption of whole rebound from 66.31 low. EUR/USD, GBP/USD, AUD/USD and USD/CHF all show loss of downside momentum in Dollar in 4 hour MACD. We’ll see if Dollar can stage a rebound from here.

US President Donald Trump said yesterday that China has “started the buying” of US farm products” and he added “I want more”. Also, he repeated the usual rhetorics that “The deal with China’s coming along very well. They want to make a deal… They sort of have to make a deal … because their supply chain is going down the tubes.”

Meanwhile, US Trade Representatives Robert Lighthizer indicated the administration is still aiming to finalize the first phase of US-China trade deal for signing at the APEC meeting in Chile on November 16-17. However, there are still outstanding issues to resolve. Deputy-level meetings took place yesterday. Lighthizer and Treasury Secretary Steven Mnuchin are expected to talk to Chinese Vice Premier Liu He on Friday.

China Ministry of Industry and Information Technology (MIIT) spokesman said “we will look at the trade friction between China and the United States with an open mind and a big heart.” And, “we will not blindly emphasize ‘self-reliance’, and not decouple from the development of international industries.”

Separately, Vice Foreign Minister Le Yucheng said that “as long as we respect each other and seek equal cooperation, there are no disagreements that cannot be resolved between China and the United States.” He also emphasized, “What China wants is to deliver a better life for the Chinese people. We don’t want to take anything from anyone else. There’s no such thing as China replacing anyone or threatening anyone.”

UK Prime Minister Boris Johnson’s Brexit deal will come back to the Commons on Tuesday, after twice being denied a vote. A vote on Second Reading, the general principle of the Withdrawal Agreement Bill, is expected to be held at around 1900GMT. After that, a vote on Program Motion will be held shortly after, for the timetable for the bill’s passage.

The first vote would be the real moment of truth for Johnson. If he’s defeated there, the bill is dead. Though, it’s currently generally believed that Johnson would get a very narrow win. The second vote is about the timing of Brexit. The government is trying to push through a Third reading this Thursday, so as to meet the Oct 31 Brexit deadline. It’s highly doubtful if MPs would support this accelerated schedule. If not, another Brexit delay is inevitable.

UK public sector net borrowing and CBI industrial order expectations will be featured in European session. Canada retail sales, and BoC business outlook survey will be the focuses in US session. US will also release existing home sales.

USD/CAD’s fall is still in progress and intraday bias remains on the downside for 1.3016 low. Decisive break there will carry larger bearish implications. Next downside target will be 1.2781 support. On the upside, above 1.3145 minor resistance will turn bias neutral first. In this case, we’ll look at the structure of any subsequent rebound to assess the chance of bottoming. 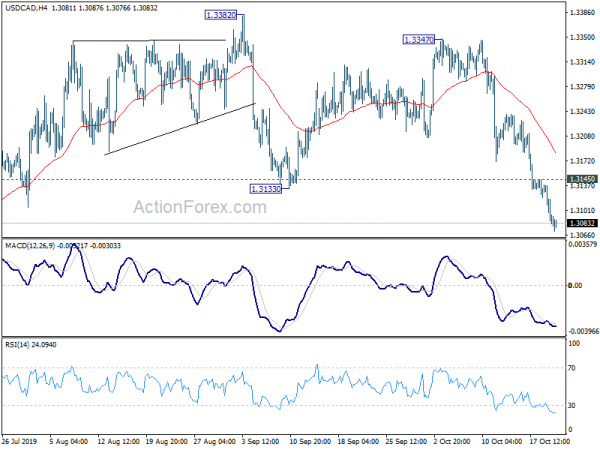 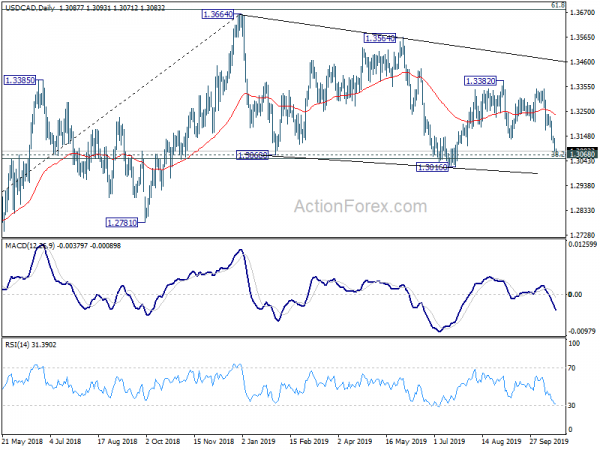