Trading in the forex markets remain subdued ahead of weekly close. Euro is generally softer as data showed German business and consumer sentiments remained weak. Also, professional forecasters downgraded Eurozone inflation and growth projections in latest survey. For the week, Canadian Dollar remains the strongest one, followed by Dollar and then Yen. Sterling is the weakest, followed by Swiss Franc and then Euro.

German Ifo Business Climate was unchanged at 94.6 in October, slightly above expectation of 94.5. Current Assessment index dropped to 97.8, down from 98.6 and missed expectation of 98.0. Expectations index rose to 91.5, up from 90.9, and beat expectation of 91.0. Ifo also noted that “the German economy is stabilizing”.

Germany Gfk consumer sentiment for November dropped to 9.6, down from 9.8, missed expectation of 9.8. Gfk noted that besides known risk factors such as the global economic downturn, trade conflicts and Brexit chaos, there are increasing reports of job losses, such as in the automotive industry and on the financial markets, for example. These events have dampened the mood of consumers again and optimism is dwindling

In particular, economic expectation indicator continued its down trend dropped -4.8 pts to -13.8. That’s the lowest level in nearly seven years since December 2012. “According to consumer estimates, the risk that Germany could slide into a recession has increased again recently. Combined with the trade conflict, the global cooling off of the economy, which will especially impact the strongly export-oriented German economy, will not leave the German economy unscathed. Consequently, several automobile manufacturers as well as their suppliers have already announced redundancies. This loss of jobs at car manufacturers will be further intensified in future by the forthcoming transition to electro-mobility. Owing to the European Central Bank’s (ECB) low-interest-rate policy, banks are experiencing increasing difficulties.  As the example of Deutsche Bank shows, they are reacting with branch closures and redundancies.”

After a two-hour meeting with EU27 ambassadors in Brussels, EU chief Brexit negotiator said “no decision” was made regarding Brexit extension yet, despite the “excellent” discussion. It’s widely reported, and generally believed, that EU is in full agreement on the need for an extension. Work will continue over the weekend take make the decision by written procedure. But the duration for the extension is undecided, waiting for results on a vote on UK Prime Minister Boris Johnson’s push for Christmas election. The finally decision could be made on Monday or Tuesday.

Chancellor Sajid Javid told BBC Radio today that “The opposition have said, week after week, that if there is a delay of three months, which is what they requested through parliament, then they will vote for a general election, so let’s see if they keep their word. And if they don’t then we will keep bringing back to parliament a motion to have an election. And we will keep doing that again and again.”

Labour leader Jeremy Corbyn told ITV that Johnson needed to come to parliament on Monday and rule out a no-deal Brexit. He also criticized the December 12 election date as being “odd for many reasons – it’s so near Christmas, it’s after universities finish their terms”.

EUR/USD is staying in consolidation from 1.1179 and intraday bias remains neutral. Deeper retreat could be seen but downside is still expected to be contained by 1.1602 support to bring another rally. On the upside, break of 1.1179 will resume the rally from 1.0879 to 1.1412 key resistance next. However, break of 1.1062 will turn focus back to 1.0879 low instead. 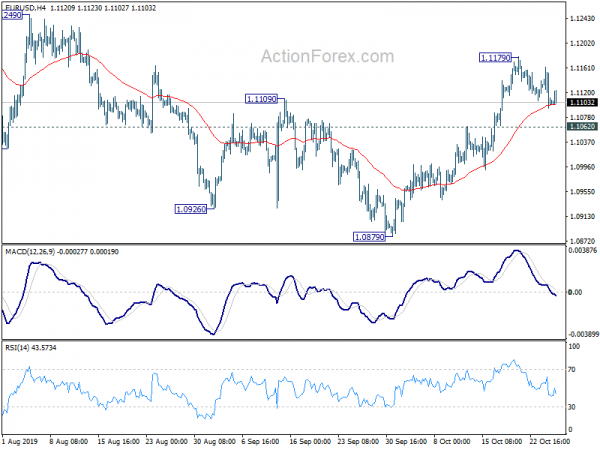 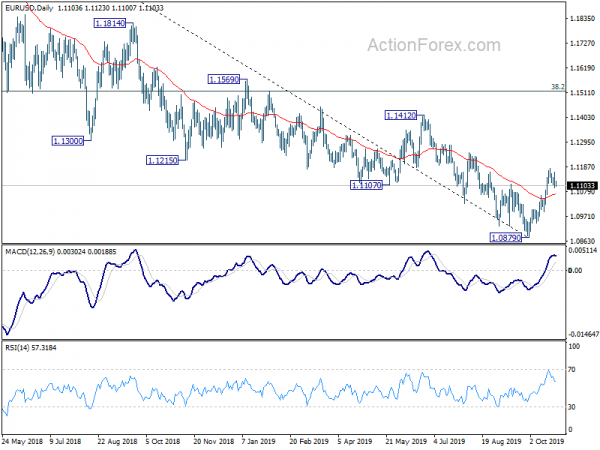