Dollar Pares Gain ahead of Resistance in Indecisive Markets

The markets are relatively indecisive today. It seems that rally in stock markets have passed a near term climax, awaiting fresh developments in US-China trade negotations. Treasury yields also turn mildly lower after yesterday’s rally. In the forex markets, Dollar struggles to ge through near term resistance against both Euro and Yen, and it’s giving back some gains. Major pairs and crosses are generally stuck in yesterday’s range for now.

Technically, 1.1062 support in EUR/USD remains a focus for the rest of the week. Break should indicate completion of recent corrective rebound from 1.0879, and bring retest of this low. Ideally, this should be accompaneid by break of 0.9977 resistance, which should than bring retest of 1.0027. 0.8575 tempoary low in EUR/GBP is also worth a watch. Break will resume recent fall from 0.9324.

In the Regional Economic Outlook report, IMF downgraded Eurozone growth forecasts for both 2019 and 2020. It said that “global trade and manufacturing have weakened and so have these sectors in Europe… , European exports are softening and prospects for a recovery in global trade are not as strong as they were six months ago”. IMF also urged that “monetary policy should remain accommodative where inflationary pressures are still subdued, which is the case in most European economies.”

Eurozone retail sales rose 0.1% mom in September, matched expectations. Volume of retail trade increased by 0.4% for automotive fuels and by 0.1% for non-food products while food, drinks and tobacco fell by 0.4%.

Chris Williamson, Chief Business Economist at IHS Markit said: “The euro area remained close to stagnation in October, with falling order books suggesting that risks are currently tilted towards contraction in the fourth quarter. While the October PMI is consistent with quarterly GDP rising by 0.1%, the forward looking data points to a possible decline in economic output in the fourth quarter…

“As for the immediate outlook, much depends on geopolitical issues such as US tariff developments and Brexit, though we will also be watching Christine Lagarde’s first policy meeting on 12th December to assess the appetite for further stimulus from the ECB. Time is needed for recent policy changes to take effect, though if the data flow continues to disappoint more action is on the cards for early next year.”

In the minutes of September BoJ meeting, “members shared the view that, while slowdowns in overseas economies continued to be observed and their downside risks seemed to be increasing, it was becoming necessary to pay closer attention to the possibility that the momentum toward achieving the price stability target would be lost.”

One member warned “given the concern that the delay in the recovery in overseas economies would have a negative impact on Japan’s economic activity and prices, it was necessary to consider desirable policy responses while paying attention to the side effects.”

Another member also urged that BOJ must consider “all possible policy measures without preconception, including cutting the short-term policy interest rate, lowering the target level of 10-year JGB yields, expanding asset purchases, and accelerating the expansion of the monetary base”

Also, it’s noted noted that “there was relatively large room for monetary easing among yields in the short- to medium-term zone, and lowering the short-term policy interest rate was deemed appropriate.”

New Zealand unemployment rate rose to 4.2%, but RBNZ will still hold next week

Despite the surge in unemployment rate, it’s still lower than the 4.4% forecast by RBNZ in the August Monetary Policy Statement. Then, there should be any change to RBNZ’s decision next week, when markets are expecting a hold. Nevertheless, the data still raises some concern over the sustainability of of impact of RBNZ’s -50bps rate cut back in August.

USD/CHF is staying in consolidation pattern from 1.0027 and intraday bias remains neutral. Further rise is expected as long as 0.9851 support holds. On the upside, break of 0.9970 will bring retest of 1.0027 resistance next. On the downside, though, break of 0.9851 will indicate completion of whole rise from 0.9659 and turn outlook bearish for retesting this low. 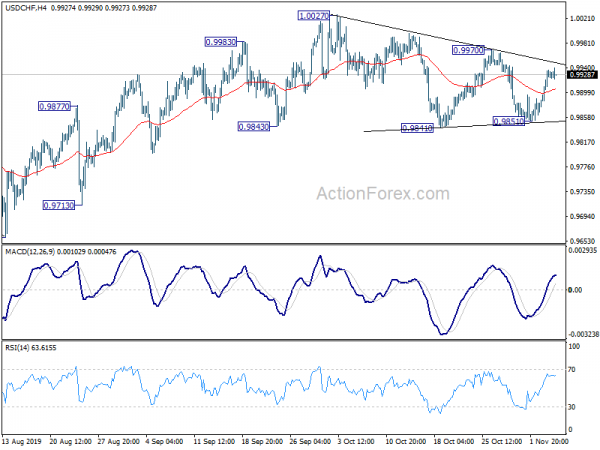