Commodity currencies are back under pressure as Asian markets tumble on uncertainties over US-China relations. It’s unsure whether the phase-one trade deal could be completed in time to avert the December batch of new tariffs. The situation is further complicated by US passage on an Act to support Hong Kong’s autonomy. At this point, Yen is the strongest one for today, New Zealand and Australia the weakest. Over the week, Euro and Yen are the strongest while Canadian and Australian are the weakest.

Technically, USD/CAD is on track to test 1.3347/82 resistance zone. Decisive break there would further reaffirm medium term bullish and target 1.3664 high eventually. AUD/USD was limited below 0.6841 minor resistance against despite another rally attempt. Near term outlook stays cautiously bearish and break of 0.6769 will pave the way to retest 0.6670 low. EUR/AUD’s rise from 0.5976 resumed after brief consolidation and further rise in expected now to 1.6432 resistance next.

The status of US-China trade agreement phase-one is back into question with recent comments. It’s even unsure if the negotiations could be completed within this year. December 15 is the next key date, when tariffs on around USD 156B of Chinese goods are scheduled to take effect.

According to a Bloomberg report, Chinese Vice Premier Liu He said at a dinner Wednesday night that he was “cautiously optimistic”. Zhang Yansheng, the principal researcher of China Center for International Economic Exchanges said today that the phase-one could be reached this year is there is “no disturbance”. he added, “The optimistic view is that the phase-one deal can be reached within this year, and a more pessimistic one is that the first phase will be dragged to some point next year.” But Hu Xijin, the editor of the state-backed Chinese tabloid Global Times, warned “few Chinese believe that China and the US can reach a deal soon.” He added, “China wants a deal but is prepared for the worst-case scenario, a prolonged trade war.”

On the US side, President Donald Trump complained to reporters in Texas that “I don’t think they’re stepping up to the level that I want.” White House spokesman Judd Deere said “negotiations are continuing and progress is being made on the text of the phase-one agreement”, without further elaboration.

Hong Kong could be a key factor complicating the trade negotiations. Earlier in Tuesday, Senate passed the Hong Kong Human Rights and Democracy Act unanimously, aiming at backing Hongkongers in protecting their autonomy. On Wednesday, House abandoned their version unanimously passed a month ago, adopted the Senate version, and passed swiftly with 417 to 1 votes. Trump will have 10 days, excluding Sunday, to sign the bill. It’s believed that with the near unanimous votes, there is no reason for Trump to veto the bill.

The bipartisan support to Hong Kong drew fierce response from China. The Chinese Communist Party’s main newspaper, the People’s Daily, urged the United States to “rein in the horse at the edge of the precipice” and stop interfering in Hong Kong matters and China’s internal affairs. It warned, “if the US. side obstinately clings to its course, the Chinese side will inevitably adopt forceful measures to take resolute revenge, and all consequences will be borne by the United States”.

The FOMC minutes for the October meeting revealed that most members judged that the monetary easing was enough to support growth. However, they continued to see downside to the economic outlook. It is suggested that “most” members saw policy as “well calibrated”. Moreover, they agreed that future policy decisions will be data-dependent. Further rate cuts will come only when incoming data caused a “material change” in FOMC’s assessment of the economic outlook. The market has now priced in a 45% chance of rate cut in April 2020. There is low chance for another rate cut by the end of this year as the Fed adopts a “wait-and-see” mode. More in FOMC Minutes Revealed that Most Members Saw Current Rate Level as Appropriate.

Intraday bias in AUD/USD remains neutral as consolidation from 0.6769 temporary low is extending. Outlook is unchanged that rebound from 0.6670 should have completed at 0.6929. Upside of recovery should be limited by 0.6841 minor resistance to bring another decline. On the downside, break of 0.6769 will resume the fall to retest 0.6670 low. However, break of 0.6841 will turn bias back to the upside for 0.6929 resistance. 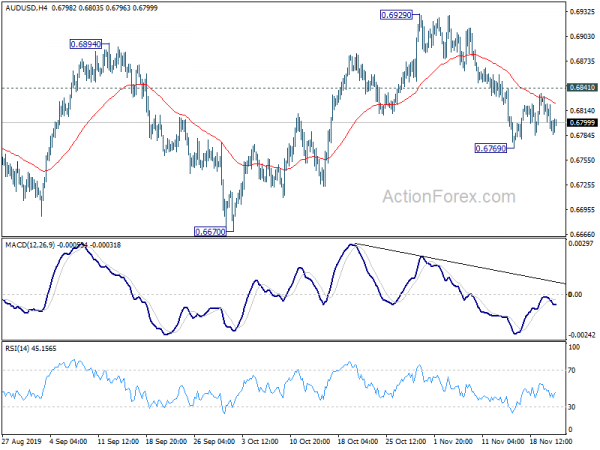 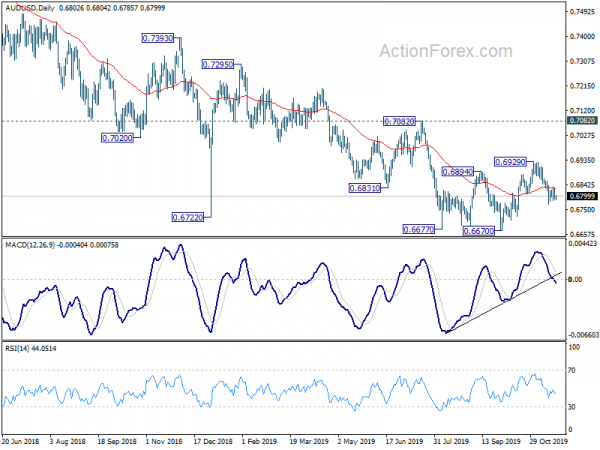