Dollar remains the worst performing one today as focuses turned from geopolitical tensions to trade. Euro is following as the second weakest as earlier rally reverses. On the other hand, buying in New Zealand Dollar picks up, followed by Swiss Franc. Sterling is also firm as the third strongest for today.

The SCMP in Hong Kong reported that Chinese Vice Premier Liu He would lead a delegation to Washington this Saturday to sign the phase one trade deal with the US. The delegation is then expected to stay in the US for a few days, before leaving in the middle of next week. At this point, there is no confirmation for the arrangement yet.

The news is somewhat consistent with US Trade Representative Robert Lighthizer’s comment on December 13, that the deal would be signed “in the first week of January. Nevertheless, it’s inconsistent with President Donald Trump’s comment that there will be a signing ceremony when he and Chinese President Xi Jinping “get together”.

US Goods Trade Deficit narrowed -5.4% mom to USD 63.2B in November, much smaller than expectation of USD -69.2B. Goods exports rose USD 0.9B over the month to USD 136.4B. Goods imports dropped USD -2.7B to USD 199.6B. Also released, wholesale inventories was unchanged in November, versus expectation of 0.3% mom rise.

EU Hogan seeks a reset in trade relationship with US

EU Trade Commissioner-designate Phil Hogan told the Irish Times that he’s “seeking a reset” of the trade relationship with US. In particular, he noted that steel aluminum tariffs and threat of tariffs in response to a digital tax in Europe.

Hogan spoked with US Trade Representative Robert Lighthizer just before Christmas. He added, “We agreed to meet in Washington in mid-January to discuss the long list of issues causing strain in the relationship between the EU and the US. There is no point in getting into the details of resolving trade irritants unless we agree a line on a common trade agenda.”

Swiss KOF Economic Barometer rose to 96.4 in December, up from 92.6, beat expectation of 94.5. The indicator has now fully recovered the decline this year, back to the closing level in 2018. Nevertheless it’s still below it’s long run average. And KOF said “the outlook for the Swiss economy at the beginning of 2020 is brightening somewhat, but remains subdued.

KOF added: “The distinct increase is primarily due to bundles of indicators from the manufacturing sector. Positive signals also result from indicators covering other services and foreign demand. Indicators concerning private consumption as well as hotel and catering activities show a moderate increase.”

USD/CHF’s decline accelerates to as low as 0.9708 so far and intraday bias stays on the downside. Current fall form 1.0023 should target 0.9659 support next. On the upside, above 0.9753 minor resistance will turn intraday bias neutral and bring consolidation first, before staging another decline. 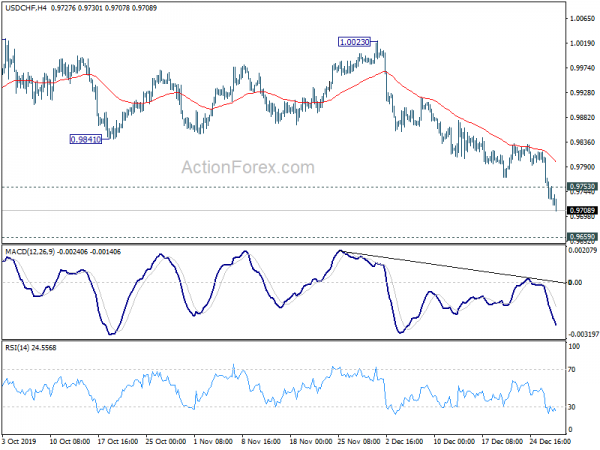 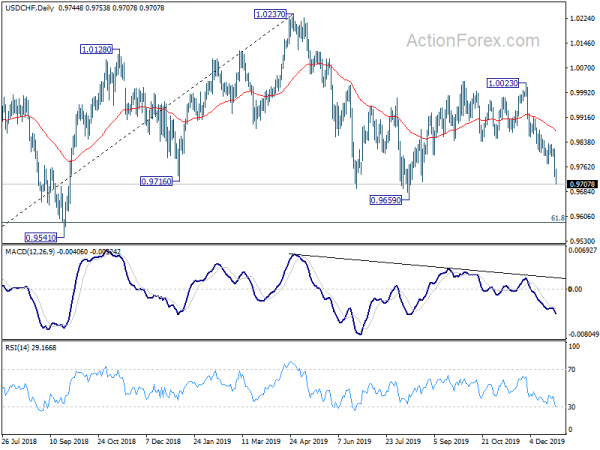