Yen weakens broadly today as markets are generally in risk on mode. US stocks rose broadly overnight with S&P 500 and NASDAQ closing at record highs. Sentiments were lifted as US scrapped labeling of China as currency manipulator, just ahead of trade deal signing on Wednesday. Asian stocks are mixed but sentiments are clearly positive with another day or rally in Japan yield. Back in the currency markets, Sterling is the second weakest as poor economic data adds to the case of BoE easing. Euro, Canadian and Aussie are the stronger ones.

Technically, EUR/JPY’s break of 122.65 resistance aligns its outlook with USD/JPY. That is rise form 115.86 is resuming. EUR/GBP is also pressing 0.8591 resistance and break will resume rebound from 0.8276. Strength in EUR/JPY and EUR/GBP could limit downside potential for EUR/USD for now, as it’s also recovery ahead of 1.1066 support. But renewed selling in EUR/CHF through 1.0782 support could undo the rally attempts of EUR/GBP and EUR/JPY and drag the common currency lower.

US Treasury dropped designation of China as currency manipulator on Monday, just two day ahead of the signing of trade agreement phase one. In the latest report, Treasury said with the deal, China had made “enforceable commitments to refrain from competitive devaluation”.

It’s noted that the Yuan has depreciated as far as 7.18 per U.S. dollar in early September. However, since then, the currency has rebounded. “In this context, Treasury has determined that China should no longer be designated as a currency manipulator at this time,” the report said. 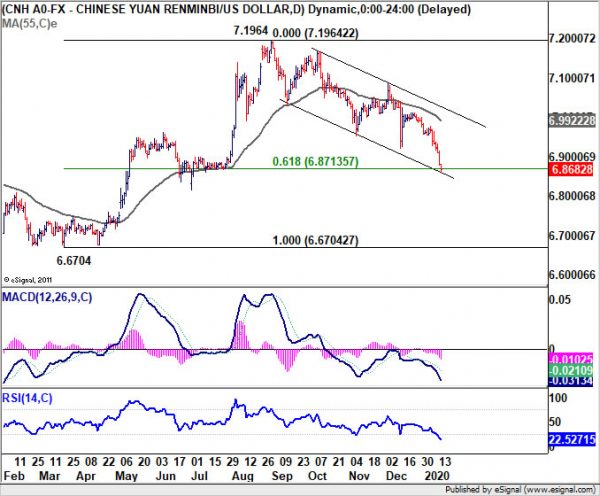 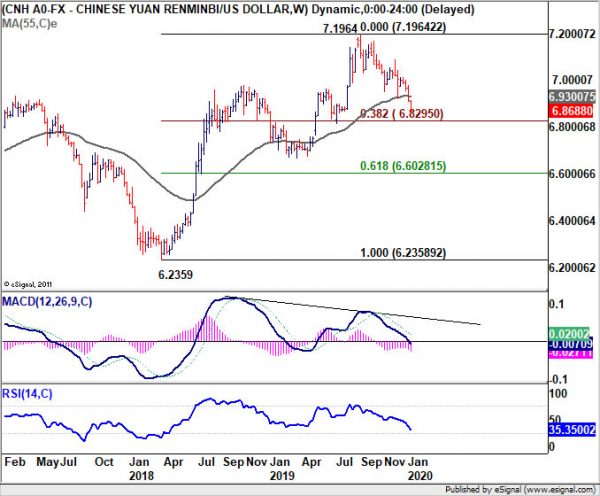 US Trade Representative Robert Lighthizer told Fox Business Network that the US-China trade deal to be signed on Wednesday is a”a really good deal for the United States”. But he’s no “Pollyanna” on how China would follow through the commitments. He just noted that “we’re tough, hard people, and we expect them to live up to the letter of the law.”

He added, “we will have people looking at whether or not they’re living up to their commitments on tech transfer, on IP, on financial services, opening on agriculture standards issues and the like.” “So, this is something that we’ll have to monitor.”

Lighthizer also said “we are about finished with the translation. It always takes time.” He was holding the English version of the deal and “we’re going to make it public on Wednesday before the signing.”

The Information Technology & Innovation Foundation called on the US, EU and Japan to “band together in strong trilateral partnership to pressure China into rolling back the mercantilist trade practices it uses to grow advanced, innovation-driven industries”.

In a report released on Monday, the think tank warned “without aggressive, coordinated action, leading economies in Europe, Asia, and North America are likely to face a crushing wave of unfair competition”. Jobs are also threatened in industries as diverse as aerospace, automobiles, biopharmaceuticals, chemicals, electronics, digital media, Internet services, machine tools, semiconductors, and others.

“China has progressed enough economically and technologically that it no longer fears bilateral pressure against its mercantilist trade violations, but it sees collective action as a real deterrent,” said ITIF’s associate director for trade policy, Nigel Cory, who co-authored the report with ITIF President Robert D. Atkinson. “Neither the United States nor the European Union nor Japan can make China change its ways alone, but together, through a stronger trilateral agenda, they can.”

Looking ahead, US CPI will be the main focus for today.

EUR/JPY’s break of 122.65 resistance suggests resumption of whole rise form 115.86. Intraday bias is back on the upside. Current rise should be seen to medium term channel resistance (now at 124.06). Sustained break there will carry larger bullish implication. On the downside, break of 122.11 minor support will turn intraday bias neutral and bring retreat. But outlook will stay mildly bullish cas long as 120.17 support holds. 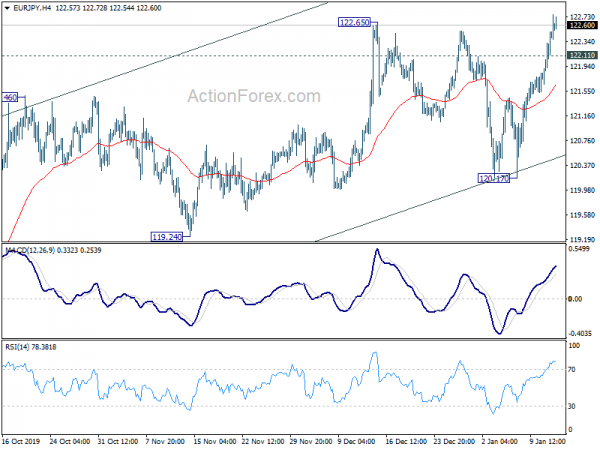 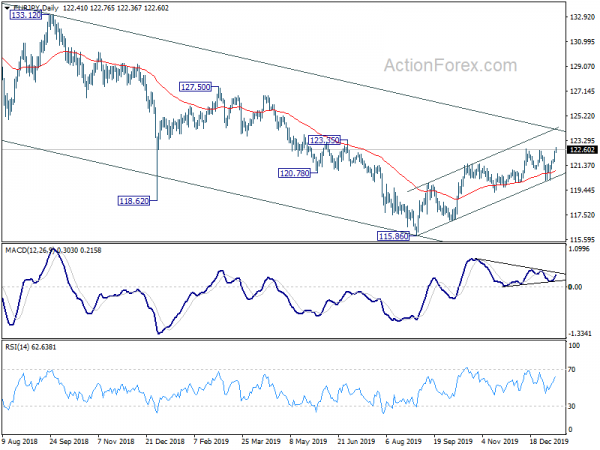