The forex markets are generally staying in tight range today. Yen is attempting to extend recent down trend but momentum is relatively weak. In particular, USD/JPY is feeling a bit heavy ahead of 114.36 key medium term resistance level. Euro is firm as Sentix investor confidence stayed closed to 10 year high in July. But both Dollar and Sterling are mildly stronger and they pare some of last week’s losses. Canadian Dollar is also in consolidation even though markets are expecting BoC to deliver a 25bps rate hike later in the week. In other markets, Gold dips to as low as 1204 and is held below 1210 handle so far. WTI crude oil is mildly lower at around 44.0.

Eurozone Sentix investor confidence dropped 0.1 to 28.3 in July but beat expectation of 28.3. That’s also close enough to the 10 year high at 28.4 made last month. Sentix noted in the statement that "in the last few days, the fears of investors before a change in interest rate policy in the euro area determined market activity." While investors’ assessment rose for the seven straight month, expectations "cannot quite keep up". "The trend continues to be in the Eurozone, but the momentum should have reached a certain zenith." It also noted that the central bank policy index dropped to -26 as "it has been clear to investors that the ECB must leave its expansive course." But the inflation expectation index had an opposing trend and rose to -15.75. Sentix said that "it would not be a surprise if Mario Draghi at the next ECB meeting would rather warn investors not to be certain in their assessment of the speed of monetary policy, not the direction itself."

ECB Villeroy: Next fall is time to adapt the intensity of stimulus

ECB Governing Council member Francois Villeroy de Galhau said that it will be the central bank’s decision "next fall" on "on adapting the intensity" of the monetary policy that "progress toward our inflation target and toward economic recovery." He used the phrase "adapt the intensity" a total of three times. That is seen by analysts as sign that ECB could pare back stimulus that would have least impact to tighten up financial conditions. Executive Board member Benoit Coeure also said last Friday that the central bank’s decision to lower monthly bond purchase from EUR 80b to 60b is a guide for future policy adjustments. For now, markets generally expect ECB to announce a tapering plan in September that would bring down monthly asset purchase to zero in 2018.

In a BoJ quarterly report, the central bank upgraded the assessment on regional Japan. Six regional economies are described as "expanding moderately" or "moving toward a moderate expansion". That’s seen as the most upbeat language since 2005. BoJ Governor Haruhiko Kuroda also said that "Japan’s economy is expected to continue expanding moderately ahead." Nonetheless, Kuroda also remained cautious and reiterated the pledge to maintain ultra-loose monetary policy until the 2% inflation target is met. Released from Japan, machines orders dropped -3.6% mom in May versus expectation of 0.7% mom rise. Current account surplus narrowed to JPY 1.40T in May. Eco Watchers sentiment rose to 50 in June.

EUR/USD continues to stay in range below 1.1444 and intraday bias remains neutral. Consolidation could extend but in case of another fall, downside should be contained by 1.1291 resistance turned support to bring rise resumption. Break of 1.1444 will extend the rally from 1.0339 low to 1.1615 resistance next. Meanwhile, break of 1.1291 will turn focus back to 1.1118 support instead. 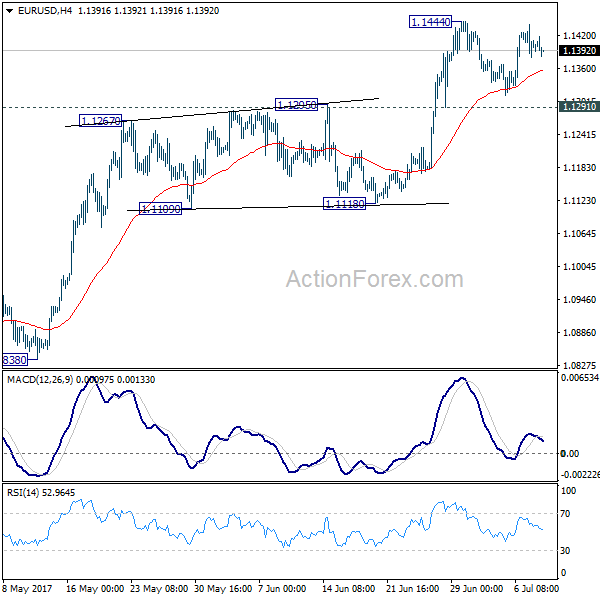 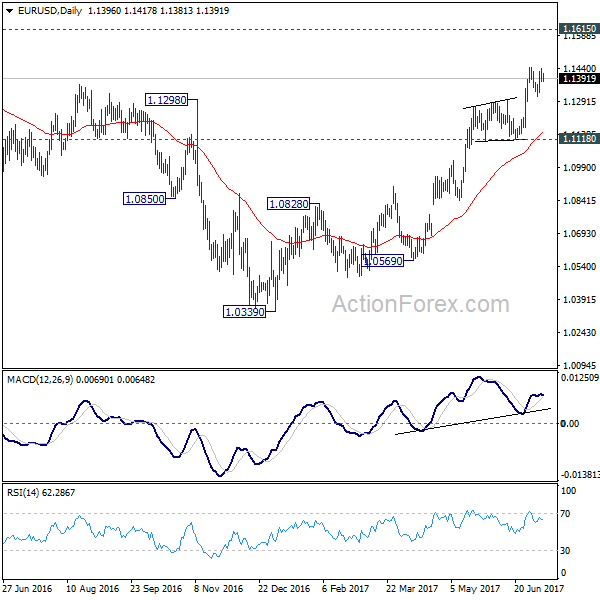