Dollar softens mildly again today as consolidation extends. The shock delivered by initial jobless claims is actually rather well expected. The greenback dips slightly after Fed chair Jerome Powell’s comments, but that’s it. BoE keep monetary policies unchanged at the scheduled meeting today, which also triggered little reactions. Yen is currently the strongest one, followed by Australian, which suggests that there is no clear direction in risk markets.

Technically, with today’s recovery, EUR/USD is now pressing 1.0981 minor resistance. As long as it holds, we’d expect EUR/USD’s down trend to resume sooner rather than later. However, sustained break will threaten near term bearishness and put focus back to 1.1496 key resistance. We might see the selloff in Dollar spill over to other pairs too. In particular, USD/JPY looks finally make up its mind to move away from 112.22 key resistance. The pair might head for a test on 106.75 support.

Fed Powell: We’re not going to run out of ammunition, that doesn’t happen

Fed Chair Jerome Powell told NBC that the US may “well be in a recession”. But this is different from a “normal recession” as “there is not anything fundamentally wrong with our economy”. And, “quite the contrary, we’re starting from a very strong position”. Also, it’s not a “typical downturn” and “at a certain point, we will get the virus under control and confidence will return.”

Powell also said Fed’s recent measures will provide capital to businesses that need it. “When it comes to this lending, we’re not going to run out of ammunition, that doesn’t happen,” he added. “We still have policy room in other dimensions to support the economy.”

He explained that Fed is targeting places “where credit is not being offered where it should be offered.” “We can step in and make that happen. That’s a very positive thing and appropriate thing in this highly unusual situation we’re in,” he said.

BoE voted unanimously to keep Bank Rate unchanged at 0.1%, as well as keeping asset purchase target at GBP 645B. The MPC will “continue to monitor the situation closely and, consistent with its remit, stands ready to respond further as necessary to guard against an unwarranted tightening in financial conditions, and support the economy.”

The central bank said that the “nature of the economic shock” from coronavirus pandemic is “very different from” those the central bank has previously had to responde to. The “scale and duration” will be “large and sharp but should ultimately prove temporary”. Monetary policy is now aimed at “guarding against an unwarranted tightening in financial conditions and, more broadly, supporting businesses and households through the crisis and limiting any lasting damage to the economy.”

Germany Ifo export expectations dropped sharply from -1.1 to -19.8 in March. That is the sharpest decline since reunification, and the lowest level since May 2009.

“In light of the current development, we are withdrawing our consumer forecast of one percent growth for 2020. Retailers, manufacturers and service providers must prepare for a recession,” explains Rolf Bürkl, GfK Consumer Expert. “How severe this recession will be will ultimately depend on when the economy finds its way back to normality. A reliable forecast regarding consumption can only be made once we can predict how long the protective measures to combat corona will remain in place.”

IW: Negative scenario of coronavirus epidemic could fundamentally question the foundations of our prosperity

German Economic Institute (IW) said in the “positive scenario”, the coronavirus lockdown would last until end of April. GDP growth of the country in 2020 would be around -5% lower than without the pandemic. Industry could lost around -10%. Loss in private service provider would be similar to the broader economy. But in individual areas
such as the hospitality industry, double-digit losses can be expected. In this scenario, rapid recovery will begin in may and the crisis could be over by autumn. The V-shaped response would be that at best, the crisis will be almost as severe as the 2009 financial crisis, but broader.

In the “negative scenario”, lockdown could last until end of June and then catch-up process is less intensive. GDP growth would be lowered by -10% compared to the normal course. Industry would be hit hard by -18% and private service by -11%. A U shape economic activity form would be seen in which the upswing would only start at the beginning of Q3. There would be further downward dynamics if companies collapse in large numbers and confidence of consumers and investors cannot be regained. Such a decline would be “unprecedented” and would “fundamentally question the foundations of our prosperity”.

IW added: “A particular problem is the lack of, or even a total lack of, international coordination of the crisis response. There is no coordination on border closings, common solutions and strengthening foreign trade in order to increase flexibility on the supply side. Economic self-sufficiency and foreclosure are not the necessary conditions for national civil protection, but complicate adaptation and hinder recovery. As in 2008, the G20 must develop a common understanding of the crisis and define an action framework. The euro area must assume shared fiscal responsibility to prevent disintegration. To ease the burden on the ECB, corona joint bonds must therefore be examined.

EUR/USD’s rebound from 1.0635 extends higher today and focus in now immediately on 1.0981 resistance. Sustained break there will dampen immediate bearishness. Stronger rebound would then be seen back towards 1.1496 key resistance. Nevertheless, rejection by 1.0981 will retain near term bearishness. Break of 1.0785 will bring retest of 1.0635 low first. 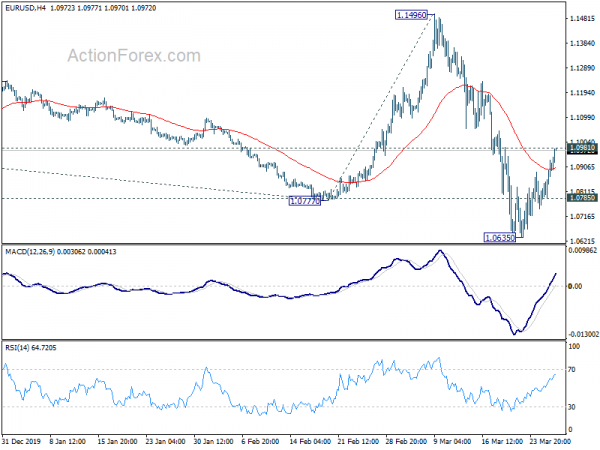 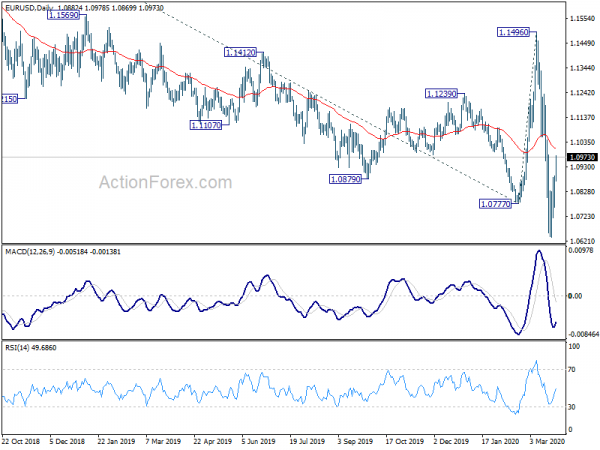