US stocks suffered the worst start to a quarter in history overnight. But Asian markets are generally steady after initial weakness. Other markets are generally stuck in familiar range. Dollar and Yen remain the strongest one for the week but there is still no clear follow through buying. Oil price is also gyrating in a tight range despite the surge in inventories. Traders seem to be waiting for tomorrow’s non-farm payroll reports before taking the next move. Though, today’s jobless claims might trigger some more volatility too.

Technically, there is no breakthrough development so far. Dollar could have bottomed against both Euro and Swiss but the recoveries are weak. Gold’s reaction to 1558 support will continue to be seen as a test on the genuine strength in Dollar’s rebound. Also, 106.75 support in USD/JPY will eventually decide whether Dollar or Yen will take the lead for the next move.

White House health advisor Dr. Anthony Fauci said that the first human trial testing a potential vaccine is “on track”. “It’ll take a few months to get the data to where we’ll feel confident to go to the phase two, and then a few months from now we’ll be in phase two and I think we’re right on target for the year to year and a half,” Fauci said.

Fed Rosengren: CARES Act a good start but we have to do more

Boston Fed President Eric Rosengren said yesterday that Fed has “acted quickly to address spillovers from the economic disruption” caused by coronavirus pandemic. But “we are probably going to have to do more than what was jut in the CARES Act, but I think it was a very good start in trying to mitigate some of the costs”. He referred to the recently passed USD 2T Coronavirus Aid, Relief and Economic Security (CARES) Act.

Alan Oster, NAB Group Chief Economist: “While the bulk of the survey was collected prior to the introduction of the more significant containment measures, the spread of the coronavirus and international developments has clearly impacted confidence. Business conditions were also weaker – and this was before activity saw a significant disruption”.

“Unsurprisingly, the forward indicators point to ongoing weakness in the business sector. While there was clearly a large amount of uncertainty at the time of the survey, it was clear that looming lockdowns and an escalation in social distancing measures would materially impact economic activity”.

Japan monetary base rose 2.8% yoy in march, below expectation of 3.7% yoy. Swiss CPI and Eurozone PPI will be featured in European session. US might deliver another stunning jobless claims report today. Trade balance and factory orders will also be released. Canada will publish trade balance too. 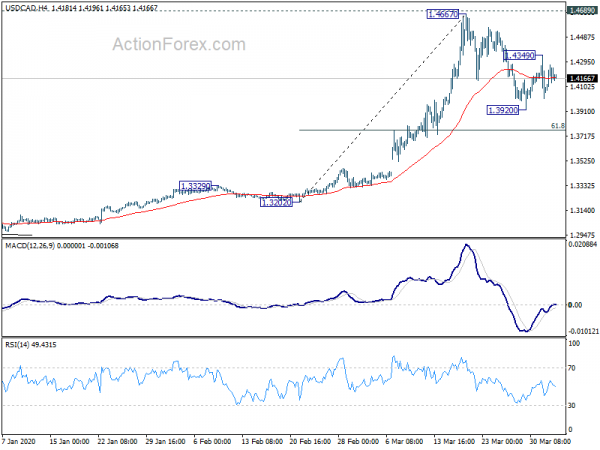 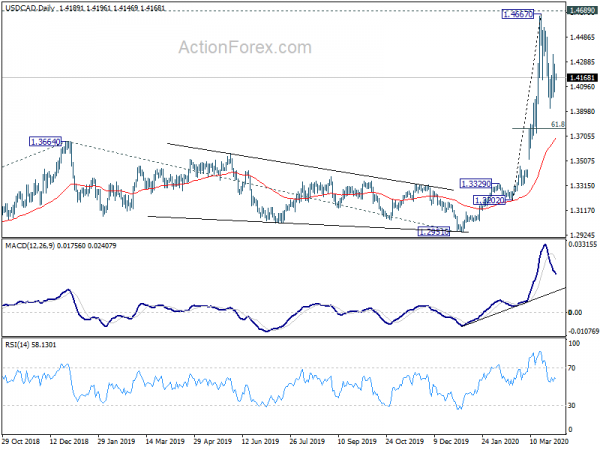