Global markets lack a clear direction today. European stocks are generally lower for the moment after EU failed to agree on coronavirus rescue stimulus. But US futures point to higher open. In the currency markets, Sterling is the strongest one for now as Prime Minister Boris Johnson is said to be “clinically stable” and “in good spirits” in ICU for coronavirus treatment. Aussie follows as the second strongest. On the other hand, Canadian Dollar is the worst performing one so far, awaiting OPEC++ meeting. Euro and Swiss Franc are also weak.

Ifo economist Timo Wollmershaeuser said in a report that the Germany economy “slumped drastically as a result of the corona pandemic” and GDP could shrink -4.2% in 2020. Unemployment rate will “skyrocket to 5.9%”. Fiscal stabilization measures will lead to a record” deficit of EUR 159B. Though, GDP could rebound next year with 5.8% growth.

Downside risks include:significantly slower weakening of the pandemic; Restarting economic activity works worse than in the base scenario or triggers another wave of infection, further measures to fight infection come into force, which shut down production longer or to a greater extent than assumed here; Faults in the financial system; Sovereign debt crisis; Realignment of global value chains and sales markets

EU Finance Ministers failed to agree on coordinated coronavirus economic rescue after marathon talks. “After 16 hours of discussions we came close to a deal but we are not there yet,” Eurogroup chairman Mario Centeno said. “I suspended the Eurogroup and continue tomorrow.”

It’s reported that there was a major disagreement between Italy and the Netherlands. Italy required a reference to debt mutualization in the recovery instrument but the Netherlands rejected.

Separately, ECB Governing Council member Martins Kazaks warned that “If policymakers leave monetary policy as the only game in town, that would be irresponsible.”

Rating agency S&P kept Australia’s sovereign rating unchanged at AAA, but downgraded the outlook from “stable” to “negative”. The outlook was upgraded from “negative” to “stable” less than two years ago in September 2018, when the budget came close to balance.

“The COVID-19 outbreak has dealt Australia a severe economic and fiscal shock” S&P said. “We expect the Australian economy to plunge into recession for the first time in almost 30 years, causing a substantial deterioration of the government’s fiscal headroom at the ‘AAA’ rating level.”

Nevertheless, “while fiscal stimulus measures will soften the blow presented by the COVID-19 outbreak and weigh heavily on public finances in the immediate future, they won’t structurally weaken Australia’s fiscal position,” S&P said.

Treasurer Josh Frydenberg said the outlook downgrade was “a reminder of the importance of maintaining our commitment to medium term fiscal sustainability.”

ANZ said, “firms are reeling from the abruptness and ferocity of the storm that has enveloped them, and with uncertainty extreme, planning a way out is very difficult. The quick-fire fiscal and monetary response will have helped, but times just don’t get much tougher than this.”

Separately reported by the central bank, Household loans rose a net 9.6 trillion won in March, highest jump since record began in 2004. That came after another record of 9.3 trillion won rise back in February. Mortgage lending rose a net 6.3 trillion won, slowed from February’s 7.8 trillion won. 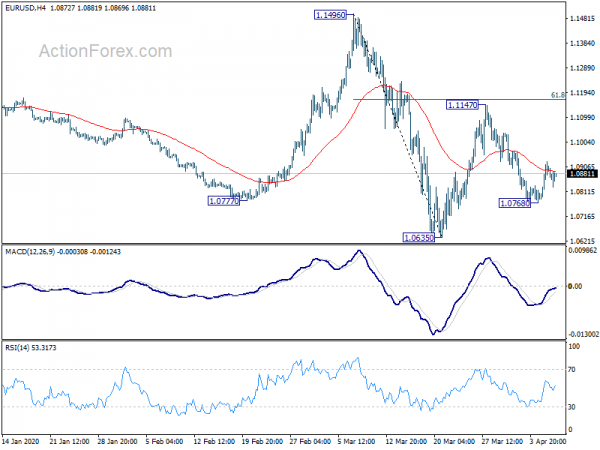 ECB ‘Will Probably Need To Go Even Further’

Aussie Reverses Is Losses In The Asian Session