The currency markets are relatively quiet today, with major pairs bounded inside yesterday’s range. Dollar weakens after poor durable goods orders data, but New Zealand Dollar is even weaker. Euro recovers after yesterday’s selloff, followed by Canadian Dollar ans Swiss Franc. For the week, Aussie is the strongest one, followed by Dollar. Sterling leads European majors as the weakest.

Clemens Fuest, President of the ifo Institute, said, “companies have never been so pessimistic about the coming months. The coronavirus crisis is striking the German economy with full fury.”

EU chief Brexit negotiator Michel Barnier complained that “the United Kingdom cannot impose this very short calendar for negotiations and at the same time not move, not progress on certain subjects that are important for the European Union.”

At the same time, “we cannot accept selective progress on a limited set of issues only. We need to find solutions on the most difficult topics,” he added. “The UK cannot refuse to extend the transition period and at the same time slow down discussions on important areas.” To be more specific, he said the UK “failed to engage substantially” on issues such as a future trade deal and that “we made no progress on fisheries”.

There will be two more rounds of talks in the week of May 11 and June 1, before a high-level meeting in June to review the negotiation progress. Barnier warned, “we must use these rounds to make real, tangible progress across all areas.”

UK Gfk consumer confidence unchanged at -34, no guarantee the fall has ended

UK Gfk Consumer Confidence was unchanged at -34 in April, hovering just 5 pts above historical low of -39 seen in July 2008.

Joe Staton, Client Strategy Director says: “Consumer Confidence has stayed steady at the minus -34 points recorded in our first COVID-19 flash of April 6th. It is too early to say whether this has now stabilised after weeks of adjustment to the reality of lockdown life, or whether further falls are to come…

“Overall, there is no guarantee yet that the fall in consumer confidence has ended, and we are only five points away from the record -39 low seen in July 2008.”

The set of data suggested that underlying inflation in Japan was weakened further by the coronavirus pandemic. More downward pressure would be seen in the trend ahead due to falling oil prices. BoJ is going to meet next week and the central bank would be forced to downgrade both economic and price assessments.

Separately, Finance Minister Taro Aso said today that the Ministry is not discussing to remove the cap on asset purchase with BoJ. They’ll closely coordinate with each other on monetary policy. Economy Minister Yasutoshi Nishimura said that, the government’s new coronavirus economic stimulus package could boost GDP by 4.4%. The measures included expanded cash payouts to citizen are worth up to JPY 1.1T. 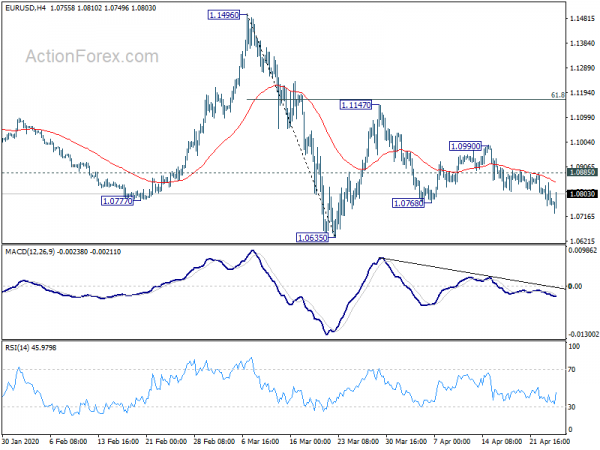 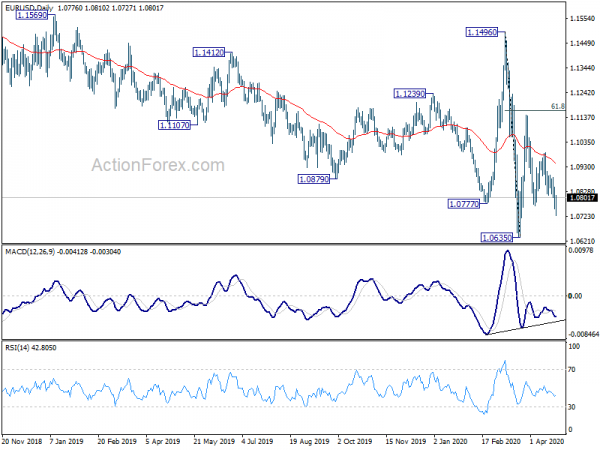