Risk appetite is back driving the global financial markets, after biotech company Novavax said it has started phase 1 human trials of coronavirus vaccine candidate. DOW future points to a breakout from recent rally for rally resumption. Dollar, Yen and Swiss Franc are decisively sold off across the board. New Zealand Dollar is leading Australian Dollar, followed by Sterling.

Technically, EUR/AUD’s break of 1.6597 key support level now suggests medium term reversal. It may take a bit more time to confirm, but outlook will stay bearish as long as 1.6763 minor resistance holds. AUD/USD is also picking up upside momentum against with focus on corresponding resistance at 0.6670. Firm break there will also suggest medium term bullish reversal. Both GBP/USD and GBP/JPY break near term resistance levels at 1.2296 and 132.40 respectively. They should be heading back towards recent highs at 1.2647 and 135.74.

BoE Haldane: Not reached a view remotely yet on using negative rates

BoE Chief Economist Andy Haldane said the central banks is only in the “review phase” regarding negative interest rates. And they don’t rule out any options “as a matter of principle”. He emphasized that “to be clear, reviewing and doing are different things and currently we are in the review phase and have not reached a view remotely yet on the doing.”

On the economy, he said that incoming data were “a shade better” than projected. “This is perhaps still a V but perhaps a fairly lop-sided V” recovery, he said. “The risks to that probably…lie to the downside rather than the up and as I say, a rather more protracted recovery even than the one that I have mentioned.”

UK CBI realized sales rose slightly to -50 in May, up from -55. That data suggested retail sales volumes continued to fall sharply, even at a slightly slower pace”. Also, the slightly easing of decline was largely driven by a return to growth in the grocery sector (up from -27 to 16).

Rain Newton-Smith, CBI Chief Economist, said: “The retail sector is at the sharp end of a crisis, with many businesses up against it. The government’s support packages are making a real difference, with more shops reporting that jobs have been furloughed, rather than lost. The furlough system will need to adapt as more businesses open their doors in the months ahead.

“As we gradually reopen the economy, retailers may yet need more support from the government if demand falters. Ensuring safety in the workplace remains the top priority, as more firms look to bring staff back to work. Many challenges remain in managing supply chains and costs in a tough environment.”

“The gradual opening of many businesses has certainly contributed to the propensity to consume not having to take any further hits, and increases even slightly at the present time,” explains Rolf Bürkl, GfK Consumer Expert. “Nevertheless, uncertainty among consumers is high. In their opinion, the Germany economy is far from being over the hump and they are anticipating a tough recession. Anxiety over job losses remains high and has proven to be a key barrier to consumption at this time, alongside losses in income. Retailers and manufacturers must continue to adapt to this situation.”

Swiss trade surplus widened slightly to CHF 4.04B in April, up from CHF 3.96B.

In the Semiannual Report on Currency and Monetary Control, BoJ Governor Haruhiko Kuroda said the “powerful monetary easing measures” will support economic and financial activities, together with the government’s coronavirus measures. He also reiterated the pledge to monitor the coronavirus impacts and BoJ “will not hesitate to take additional easing measures if necessary.”

He noted again that the economy has been in an “increasingly severe situation” and is “likely to remain the case”. But thereafter. the economy is “likely to improve” supported by accommodative financial conditions and government’s measures, as well as through the “expected materialization of pent-up demand and a projected recovery in production from the decline brought about by the spread of COVID-19.”

Still, outlook is “extremely unclear” depending on ” the timing of the spread of COVID-19 subsiding and on the magnitude of the impact on domestic and overseas economies”. Risks are “skewed to the downside. 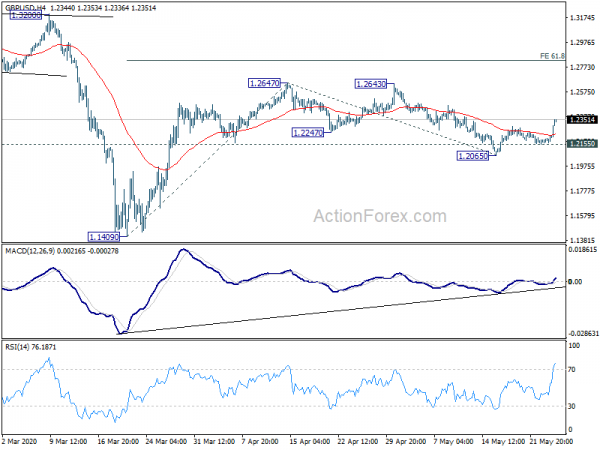 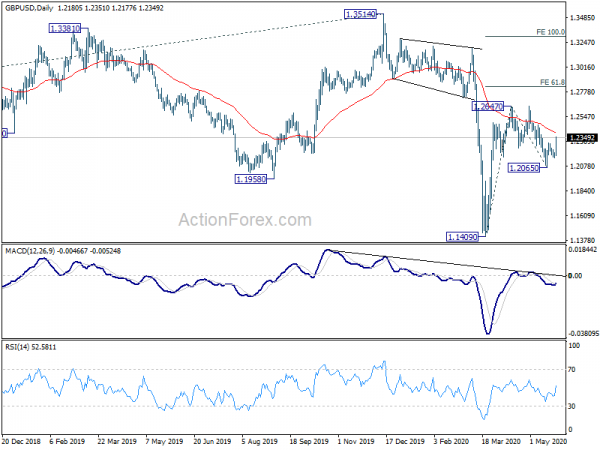