The spotlight moves back to the Swiss Franc today as EUR/CHF surges past 1.12 key resistance level. The cross is now setting up the momentum to regain 1.2 handle in medium term, which is the prior SNB imposed floor. Back in January 2015, SNB shocked the market by removing the floor and EUR/CHF dived to as low as 0.86, depending that what chart you read. With all the improvements in Eurozone, fundamentally, politically and system-wise, it now looks like there is no longer the need of safe haven parking in the Franc, with negative interest rates. The surge in commodity and energy prices would also help lift Eurozone inflation which keep ECB on course for stimulus exits.

Also regarding Swiss, the SNB’s Libor will be discontinued in 2021, after being adopted as monetary policy target since 2000. An SNB spokesman said that the central bank will announce an alternative to franc Libor "in good time" And he emphasized that "The expected end of the franc Libor won’t have an effect on the monetary policy orientation and monetary conditions." Some analysts pointed out that the Libor was mainly for the interbank market. SNB would need to rethink their approach. The secured Swiss Average Rate Overnight, SARON, could be an alternative.

Dollar is trying to recover today after the sharp post FOMC selloff. Some additional support is provided by solid economic data release. Meanwhile, it should be noted again that for the week as a whole, the Swiss Franc and Yen are indeed the weakest ones, not the greenback. Durable goods orders jumped 6.5% in June, well above expectation of 3.5%. But ex-transport orders rose only 0.2%, below expectation of 0.4%. Whole sale inventories rose 0.6% in June, above expectation of 0.3%. Initial jobless claims rose 10k to 244k in the week ended July 22, above expectation of 240k. It’s nonetheless still the 125 straight week of sub 300k reading, the best streak since early 1970s. Continuing claims dropped 13k to 1.96m and stayed below 2m for 16 straight week, best since 1973.

Yesterday, Fed left its monetary policy unchanged, maintaining the federal funds rate target at 1-1.25%. The Fed made two tweak in the statement, though. First, it noted that balance sheet reduction would begin ‘relatively soon’, signaling that the official announcement would come in September. Second, policymakers revised lower the outlook on core inflation. US dollar plunged, with the weighted index falling to a 13-month low as the market interpreted the inflation assessment as dovish.

EU chief Brexit negotiator Michel Barnier briefed the 27 EU ambassadors yesterday regarding the July talks with UK. An EU official was quoted by Reuters saying that the chance of starting "future relationship talks" with UK in October "appeared to be decreasing". Progress on financial settlement, or the so called divorce-bill, was little to none. And EU officials believed that the problem lies in the lack of position of UK on many issues. The EU officials sounded a bit worried as the more time the first phrase drags on , the less time is left for the second phase, in particular on trade agreements.

UK Immigration Minister Brandon Lewis said today that "free movement of labor ends when we leave the European Union in the spring of 2019. I’ll be very clear about that." While there is a period of negotiation with EU, Lewis emphasized that "we’re very clear that free movement ends – it’s part of the four key principles of the European Union – when we leave." That is seen as a response to recent reports that the UK government could allow a "transitional" period of three or four years regarding the issue.

In Australia, RBA governor Philip Lowe warned that prolonged weakness in wage growth could hurt the economy. He said that "if workers are getting no real wage increase year after year after year that’s insidious." And, he emphasized that high wage growth "would help get inflation back to target and I think people would feel a bit better as well, and the fact that many of us have lowered our expectations of future income growth means we’re less inclined to spend."

Regarding monetary policy, Lowe noted that "the main effect of lower interest rates is that more people have jobs". And "that’s why I’m very comfortable with the current setting of monetary policy, it’s helped people get jobs." Regarding the exchange rate, Lowe said that "it would be better if the exchange rate were a bit lower than it currently is. It would help generate more jobs, push inflation a bit closer to our target — so that’s the solution to a competitiveness problem."

EUR/CHF’s rally accelerates further today and reaches as high as 1.1247 so far. 1.1198 key resistance level is seen as taken out decisively. And there is no sign of topping yet. Intraday bias remains on the upside for 161.8% projection of 1.0652 to 1.0986 from 1.0830 at 1.1370. On the downside, below 1.1173 minor support will turn intraday bias neutral and bring consolidations. But downside should be contained well by 1.1087 resistance turned support and bring rise resumption.

In the bigger picture, sustained break of 1.1198 key resistance will confirm resumption of the long term rise from SNB spike low back in 2015. In such case, EUR/CHF could eventually head back to prior SNB imposed floor at 1.2000. For now, this will be the favored case as long as 1.0986 resistance turned support holds. 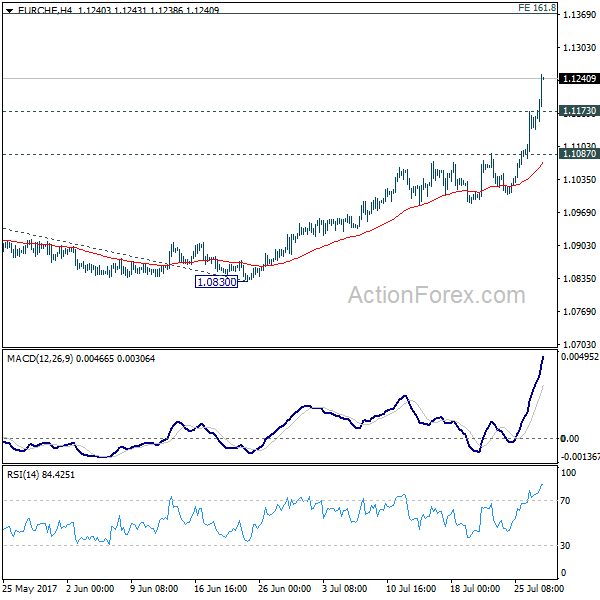 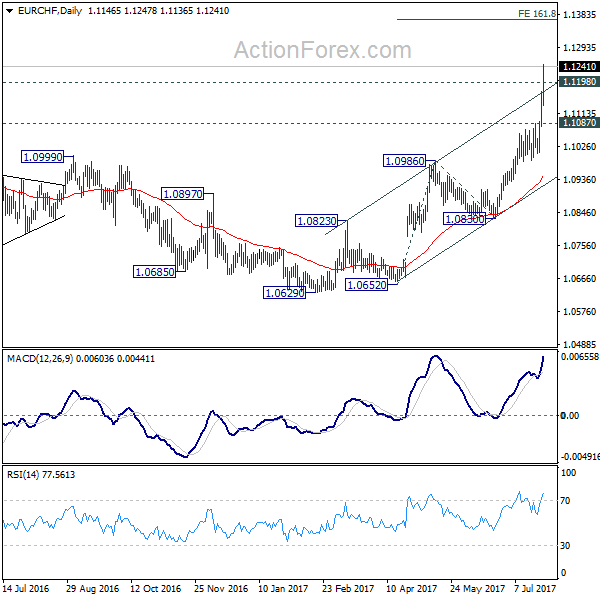