Risk Aversion Eased Mildly in Asia after Massive Selloff in US

Risk aversion carries on in Asian session today, after the massive selloff in the US overnight. But selling has some what eased ahead of the weekend. In the currency markets, Yen and Swiss Franc remain the strongest ones for the week, even though both are paring some gains. Dollar and Euro are racing to be the next strongest with Dollar having a mild upper hand. Australian Dollar is the weakest for the week, followed by Canadian and then New Zealander.

Technically, the anticipated risk pull back should have finally started. AUD/USD has taken out 0.6898 minor support. AUD/JPY broke 74.40 minor support. USD/CAD broke 1.3572 minor resistance while CAD/JPY broke 79.95 support this week. GBP/USD also broke 1.2618 minor support to confirm short term topping. The question now is whether EUR/USD would break 1.1241 minor support to align the outlook with other Dollar pairs. Meanwhile, in spite of recovery, we’re not expecting bottoms in USD/CHF and USD/JPY.

DOW in third leg of medium term correction after -6.9% fall 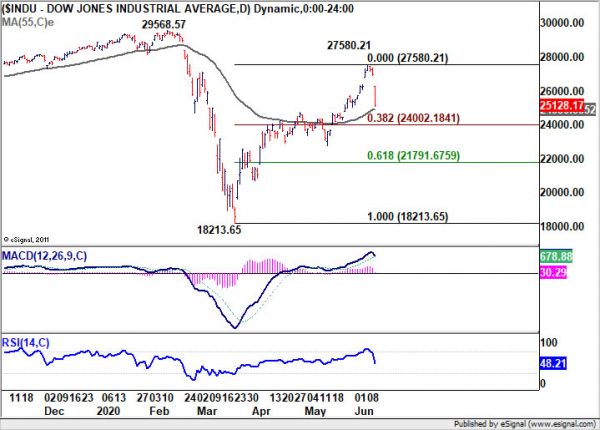 HSI gapped down on risk aversion, but selling eased

Risk aversion continues in Asian session today with Hong Kong HSI gapped down and hit as long as 23895.03. But the index then recovered as selling eased somewhat, down -1.3% only after morning session. Prior rebound to 25303.77 was a surprise to us but the overall view isn’t changed. Price actions from 21139.26 are seen as a corrective pattern. The question now is whether such correction has completed. Focus will be on 22519.73 support for the next week or two. Firm break there would pave the way to 21139.26 and below, as larger down trend resumes. 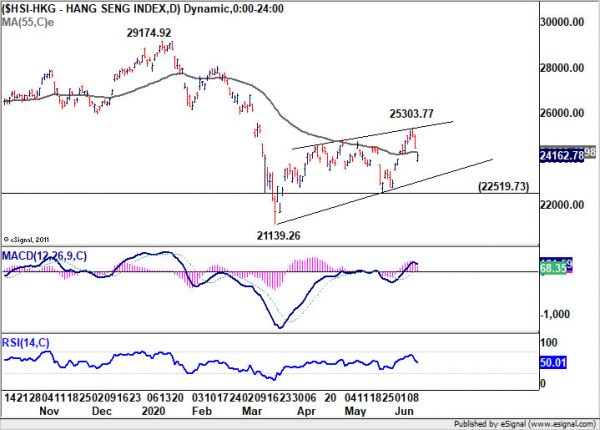 Japan Aso: We’ve succeeded in putting a floor on the economy

Japan Finance Minister Taro Aso told the parliament today that “we’ve succeeded in putting a floor on the economy, which seems to have hit bottom. Looking ahead, “how strong the recovery will be depends not just on domestic conditions but overseas developments.”

For now, the conditions surrounding the economy will remain “severe” for the time being. However, Aso rebuffed the idea of another set of fiscal stimulus. He said, “we first have to see how the measures we’ve taken so far affect the economy.”

BNZ Senior Economist, Craig Ebert said that “still, a negative tone remains evident in the fact that, even with its bounce in May, the NZ PMI merely got back to the sort of levels in sank to during the 2008/09 recession.”

UK GDP, productions and trade balance will be the major focuses in European session. Eurozone will also release industrial production. Later in the day, US will release import price index and U of Michigan consumer sentiment. 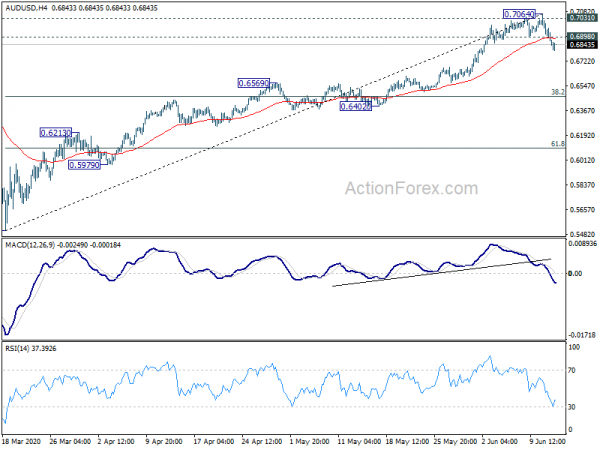 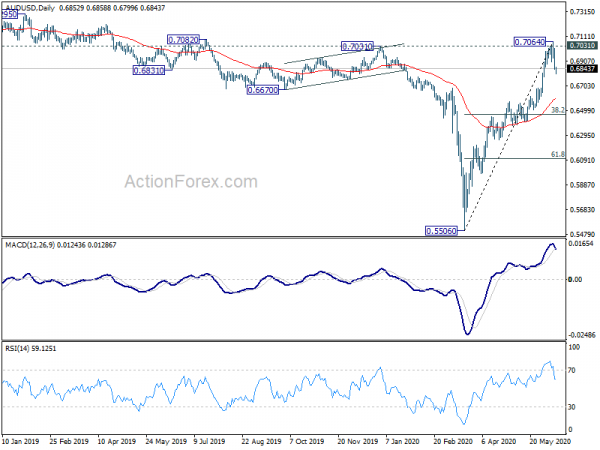