Dollar is steady in early US session and is little affected by job data miss. The ADP employment report showed 178k growth in private sector jobs in July, below expectation of 190k. DOW futures also stay steady and the index could have a go at 22000 handle today as recent rally extends. Non-farm payroll to be released on Friday is a key event to watch. And it’s expected to show 180k growth overall in July. But the fate of dollar will rely heavily on what fiscal policy US President Donal Trump can push through. It’s widely known that no the healthcare bill collapsed, tax reform is the next priority. Trump and the Republicans are targeting to complete it by year end. But so far, there is no details on it and there are reports of griefs from Republicans on the issue. Staying in the forex markets, Euro remains the strongest one after PPI data beat expectation. Sterling comes second but it could be vulnerable on tomorrow’s BoE super Thursday. New Zealand Dollar extends the post job data weakness. Canadian Dollar is trading softer as WTI is unable to regain 50 handle yet.

UK construction PMI dropped sharply to 51.9 in July, down from 54.8 and missed expectation of 54.0. That’s also the lowest level in 11 months. Markit noted that "the combination of weaker order books and sharply rising construction costs provides a concern that an extended soft patch for the construction sector may be on the horizon." Nonetheless, UK PMI manufacturing released yesterday beat expectation and rose to 55 in the same month. Also from UK, BRC shop price index dropped -0.4% yoy in July. BoE rate decision and quarterly inflation report tomorrow will be the main focus for UK.

Swiss SVME PMI rose to 60.9 in July, up from 60.1 and beat expectation of 58.8. That’s the highest level in six years since February 2011. It’s also way above long term average of 53.89. Credit Suisse which compiles the index together with the Swiss SVME, said that "this pleasing development points towards dynamic industrial output in the months to come." Also from Swiss, retail sales rose 1.5% yoy in June, above expectation of 1.3% yoy. SECO consumer confidence improved to -3 in July, meeting consensus.

New Zealand Dollar remains the weakest one today as selloff started after worst than expectation job data. New Zealand employment dropped -0.2% qoq in Q2, much weaker than expectation of 0.7% qoq rise. Unemployment rate dropped to 4.8%, down from 4.9%. Private sector labor cost rose 0.4% qoq, in line with consensus. The data affirmed RBNZ’s stance to stand pat in the environment of global policy stimulus exit.

Crude oil prices retreated after a 6-day rally, and failed to sustain above 50 handle, upon receiving some hard data pointing to abundant supply. The industry-sponsored API estimated that crude oil inventory increased 1.8 mmb in the week ended July 28. For refined oil products, gasoline and distillate stockpiles fell -4.8 mmb and -1.2 mmb respectively. Separately, a Reuters survey estimated that OPEC output increased 0.09M bpd in July to a 2017 high of 33M bpd. With an output cut compliance level climbing to 84% from 77% in June, the rise was contributed by Libya and Nigeria. The survey suggested that the biggest rise came from Libya, where output rose to an average of more than 1M bpd.

Intraday bias in EUR/USD remains on the upside as the rise from 1.0339 is still in progress. Such rally would target 1.2 handle next. Firm break there will pave the way to next key fibonacci level at 1.2516. On the downside, below 1.1763 minor support will turn intraday bias neutral and bring consolidation before staying another rally. 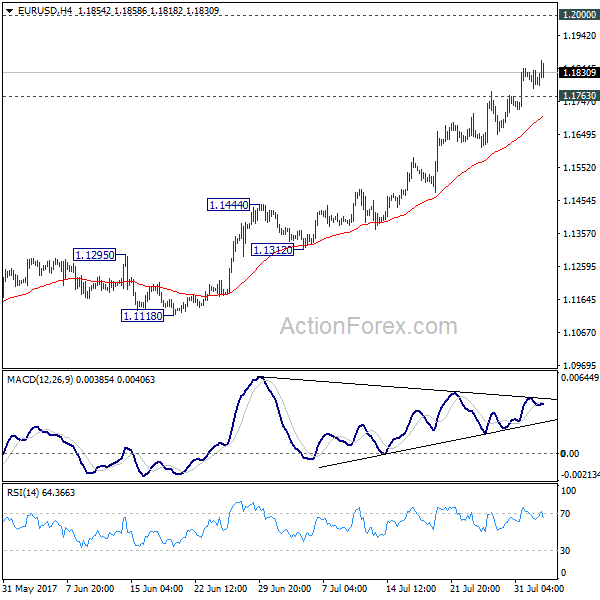 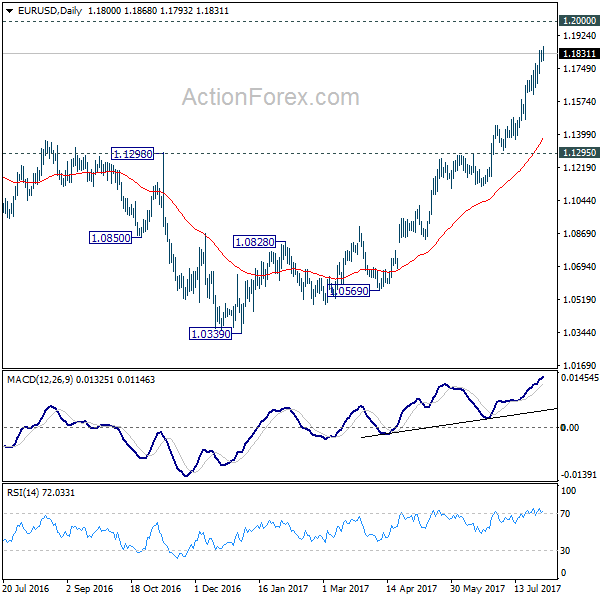