Technically, GBP/USD and AUD/USD have both taken out recent resistance at 1.3267 and 0.7275 respectively, indicating rally resumption. USD/CAD has also dropped through 1.3133 temporary low finally to resume recent fall. Focus is now on whether the relatively weak Euro would take out 1.1965 resistance to align itself with others. At the same time, Gold’s strong rally and firm break of 4 hour 55 EMA suggests completion of the fall from 2015.66. It’s possible that consolidation from 2075.18 has completed. But in any case, further rise is now in favor to 2015.66 resistance first. Break will solidify the bullish case. 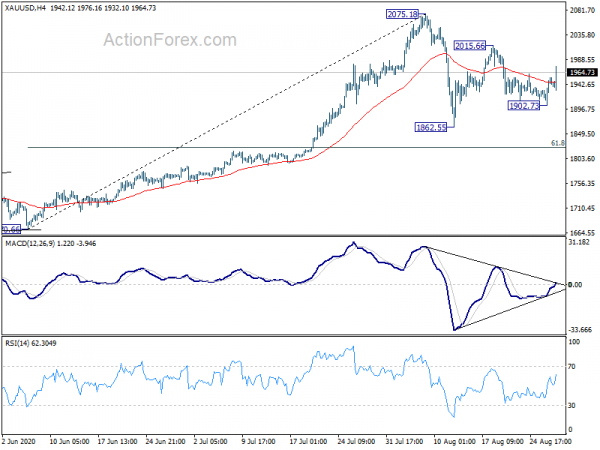 Fed Chair Jerome Powell indicates in the Jackson Hole speech that the central bank is adopting a “flexible form of average inflation targeting”. That is, Fed would target to achieve inflation that “averages 2 percent over time”. Therefore, following periods when inflation has been running below 2 percent, appropriate monetary policy will likely aim to achieve inflation moderately above 2 percent for some time.

Swiss GDP contracted -8.2% qoq in Q2, slightly better than expectation of -8.7% qoq. That’s the biggest decline since records of quarterly data began in 1980. Comparing to Q4 2019, before the pandemic, GDP slumped by a total of -10.5% in H1 2020. SEO said, “domestic economic activity was severely restricted in the wake of the pandemic and the measures taken to contain it”. But Swiss GDP decline remains “limited” in an international comparison.

The government also dropped the reference that industrial production is “decreasing as a whole” and only noted some pick up in some sectors. Employment is “showing weakness” and ” consumer prices are flat, both unchanged.

From Japan, all industry activity index rose 6.1% mom in June, below expectation of 6.3% mom.

BoJ Suzuki: Monetary easing will last even longer due to pandemic

BoJ board member Hitoshi Suzuki said “with the economy having lost momentum to achieve our price target due to the pandemic, our monetary easing will last even longer”

He noted that the benefits of the central bank’s ultra-easing monetary policy still outweighs the costs. however, “If a second and third wave of infection hits Japan, financial institutions’ credit costs could balloon to levels near those hit after collapse of Lehman Brothers” during the 2008/09 global financial crisis. 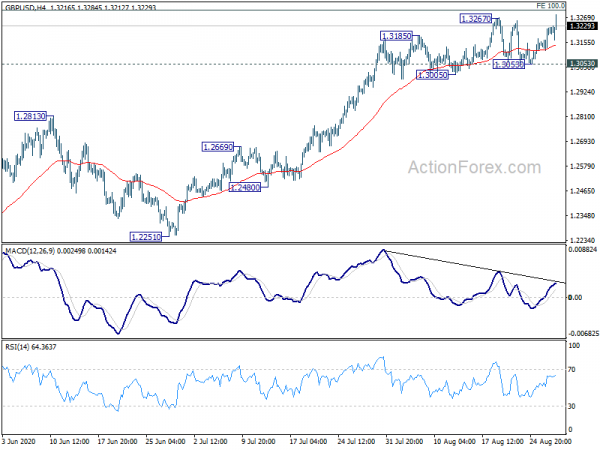 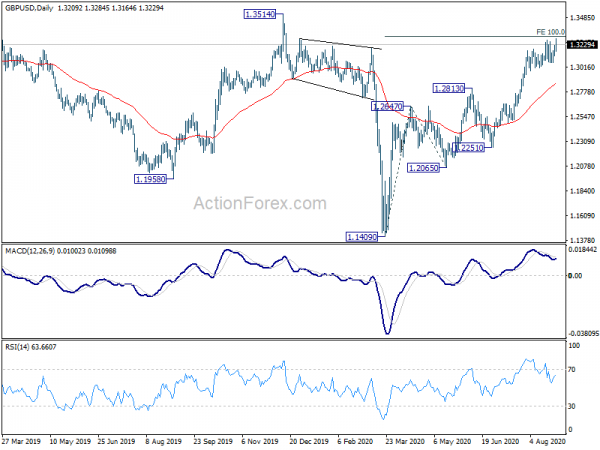