Asian markets trade with a mixed tone today despite strong rebound in the US overnight. Positive sentiments couldn’t carry through to the session again. Nevertheless, Yen is trading slightly weaker in general, followed by Canadian and Dollar. Aussie and Kiwi are the firmer ones together with Sterling. In particular, the Pound is maintaining yesterday’s gain and will look to Brexit developments for further rally. Dollar, on the other hand, will look into comments from a batch of Fed policymakers.

Technically, we’d maintain that break of 1.3007 resistance in GBP/USD and 136.46 resistance in GBP/JPY are needed to confirm the strength of Sterling. Otherwise, we’ll remain skeptical on the underlying buying. USD/JPY survived yesterday’s dip and holds comfortably above 104.92 minor support. The interaction now is, whether resumption of USD/JPY’s rebound from 104.92 could help push GBP/JPY through 136.46 resistance, and lift GBP/USD? Or another way round.

NASDAQ could have completed pull back with strong bounce

The solid rebound in US stocks overnight raised the chance that this month’s correction is already over. All three major indices, DOW, S&P 500 and NASDAQ closed above 55 day EMA. Focus for NASDAQ is now on 11245.41 resistance. Firm break there should confirm completion of the pull back from 12074.06 at 10519.59. Stronger rebound should be seen to retest 12074.06.

Nevertheless, in terms of time and depth, the whole corrective pattern shouldn’t be completed yet. Hence, we’re not expecting a firm break of 12074.06 with the next rise, if happens. Instead, there is prospect of at least one more fall to test 38.2% retracement of 6631.42 to 12074.06 at 9994.97, before completing the consolidation. But the good new is, the corrective pattern is eventually more likely a sideway pattern than a deep decline.

Fed Mester: Still far from our goals for employment and inflation

Cleveland Fed President Loretta Mester said yesterday that economic data showed the the economy is recovery but it’s still a “fragile recovery” recovery. Fed is still “far from both of our goals” for both employment and inflation. She expects unemployment to end the year between 7% and 8%. Inflation could be above 1% but well below the 2% target.

Outlook depends on the course of the coronavirus pandemic. “If things turn out that the virus remains under control and there is a vaccine that is able to be distributed, in the middle of the year, say, then we’ll see the recovery continuing and maybe broadening out a bit,” she said.

Mester also urged actions to promote an inclusive economy, “one in which people have the chance to move themselves and their families out of poverty, one in which systemic racism does not limit opportunities and one in which all people can fully participate — the U.S. economy will not be able to live up to its full potential and the country will suffer.”

In the Summary of Opinions at BoJ’s September 16-17 meeting, it’s noted that it’s “unlikely” for Japan’s economy to “rebound significantly”. Domestic demand, mainly in services consumption, will “likely remain at a low level” due to the pandemic. A “clear V-shaped recovery” has been seen in some sectors, but recovery in demand is “still no in sight in other sectors”.

Year-on-year CPI is “likely to be negative for the time being”, is expected to “turn positive and then increase gradually with the economy improving”. Thus far, “deflationary price-setting behavior” for retaining customers “does not seem to have been widely observed”.

As of monetary policy, it’s necessary to focus on supporting corporate financing and sustaining employment. “If the economic recovery is delayed, the potential growth rate of Japan’s economy could decline through rises in bankruptcies of firms and unemployment, and the functioning of financial intermediation also could deteriorate, reflecting the materialization of credit risk.”

Also from Japan, Toykyo CPI core ticked up to -0.2% yoy in September, from August’s -0.3% yoy better than expectations.

Intraday bias in USD/JPY remains neutral as consolidation from 105.70 is extending. With 104.92 support intact, further rise is in favor. On the upside, break of will resume the rebound from 104.00 short term bottom to 55 day EMA (now at 105.97). Sustained break of 55 day EMA will raise the chance of bullish reversal and target 106.94 resistance for confirmation. On the downside, though, below 104.92 minor support will turn bias back to the downside for retesting 104.00 instead. 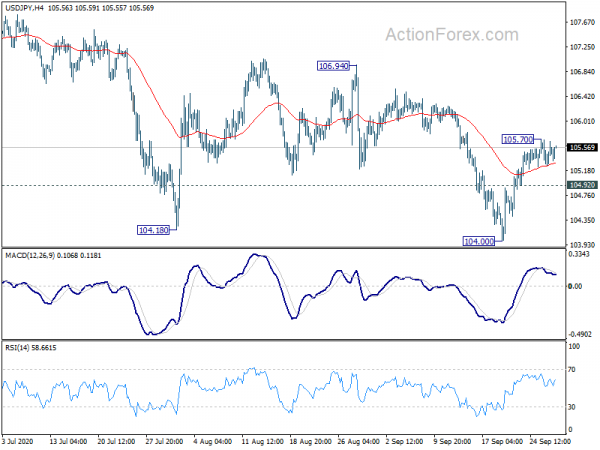 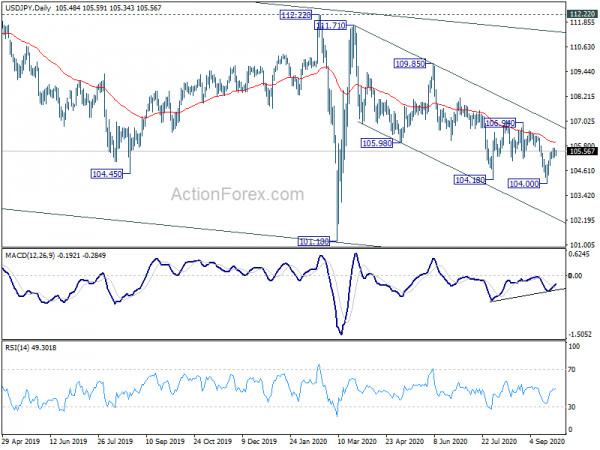 The US Dollar Continues To Climb